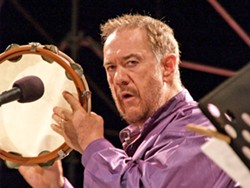 It returns again July 7 through 10, and this year it includes a new musical event featuring the sounds of world-renowned percussionist Airto Moreira and his group of stellar percussionists at the VIP Outdoor Dinner and Concert at the Avila Beach Golf Resort, Friday, July 8, at 6 p.m.

Moreira was born in the small village of Italiopolis, in southern Brazil, where he drove his mother crazy by banging the floor in time with radio songs before he could even walk. Luckily his grandmother recognized and encouraged his potential, and by age 6 he was winning music contests by singing and playing percussion. By 13 he was playing professionally, and at 16 he moved to Sao Paulo, playing nightclubs and TV appearances. A move to New York in his mid 20s set a course of worldwide stardom as he began to play with musicians such as Reggie Workman, JJ Johnson, Cedar Walton, and Walter Booker. He later rose into the jazz stratosphere with the likes of Cannonball Adderley, Lee Morgan, Paul Desmond, and Joe Zawinul,  the latter of whom recommended Airto to Miles Davis for a recording session in 1970 for Bitches Brew. Davis invited Airto to join his group, which included such jazz icons as Wayne Shorter, Dave Holland, Jack DeJohnette, Chick Corea, and later John McLaughlin and Keith Jarrett.

Opening acts will include the Ashé Ensemble, which combines rhythm, melody, and dance into performances drawing from African, Brazilian, Cuban, American soul, and Afro-Cuban jazz. Also performing is Isupo Irawo, a trio from Havana, Cuba, weaving traditional and contemporary concepts of Afro-Cuban percussion and choreography.

The Friday event is a dinner and concert that will, according to organizers, rejuvenate Avila Beach through rhythm. Tickets cost $125 with dinner, or $25 for music only. To see a full list of Central Coast Wine Classic events or to purchase tickets, visit CentralCoastWineClassic.org.

SLO Brew for you

I had to look up the music genre “hyphy,” which is apparently shorthand for “hyperactive” and attributed to Bay Area rapper Keak Da Sneak. It’s sort of the equivalent to the G-Funk genre particular to L.A. In any case, I had to look it up because along with punk rock, it’s a style that Dead to Me plays, and they’re hitting the Brew on Saturday, July 9 (7:30 p.m.; all ages; $12), with opening act Off With Their Heads.

Finally, on Wednesday, July 13, Mat McHugh, founder of The Beautiful Girls, will bring his solo acoustic, alt-rock, and reggae sounds to the stage (8 p.m.; all ages; $12 presale or $13 at the door). Mishka will open.

Guess who’s turning 100? It’s Arroyo Grande, and the little South County hamlet has been celebrating all summer long, continuing July 8 through 10 with a ton of entertainment.

On Friday, July 8, head to the Regional Center for a 6 p.m. Centennial Gala with music by Unfinished Business, or go to the IOOF Hall’s Big White Tent at 7 p.m. for a good old-fashioned square dance with caller John Ryan from Ventura. 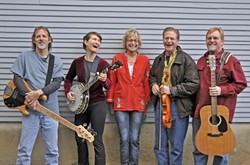 On Saturday, July 9, hit Heritage Square Park’s Rotary Bandstand from 1 to 3 p.m. for the Village Summer Concert Series’ next installment, “The Birth of Bluegrass,” with Wildwood and the Appellation Bluegrass Band. This series has been moving decade by decade though the last century. Meanwhile, at the IOOF Hall & Big White Tent on Bridge Street, hear at 1 p.m. the Central Coast Brass (under the tent); at 2 p.m. “100 Years of People” in the Historical Theatre (in the hall); at 3 p.m. another set by Central Coast Brass; and at 7 p.m. a western dance with the Throneberrys. Also, at the Centennial Park Gazebo from noon to 2:30 p.m. there’s music by The Night Run Trio with Les Beck, Mike Thibault, and Dave Becker.

On Sunday, July 10, Heritage Square Park’s Rotary Bandstand will start with a 7 a.m. Sunday Sunrise Service featuring a combined church choir. There’ll be rides and games for kids between 10 a.m. and 4 p.m., and watch for an 11 a.m. surprise guest. See “A Woolly Little Town” (a lighthearted musical spoof of old Arroyo Grande) by the Studio of Performing Arts, and from 1 to 3 p.m. check out the Village Summer Concert Series’ ’50s Sock Hop with the Mighty Croon Dogs. Meanwhile at the Centennial Park Gazebo, there’s an 11 a.m. official opening ceremony and 1986 time capsule opening, a performance from 11 a.m. till 2 p.m. by the historic Rose Garden Dance Band, and more, more, more! There’s too much to list, but find performances by Burnin’ James and the Flames, Guy Budd and the Gypsy Souls, The Cinders Blues Band, Soul Sauce Band, Monte Mills & the Lucky Horseshoe Band, and The Crisptones.

Basically, head to AG and wander around. You’ll find something to do in every nook and cranny.

It’s only a matter of time before the lesbian, gay, bisexual, and transgender community reaches full equality. I know this because when I ask my college students their position on gay marriage, about 95 percent have no objection to it. Eventually the haters will evolve or die off, leaving a new generation that embraces equality for all.

Part of this education process is thanks to events like the SLO Pride Celebration, now in its 15th year, which takes place Sunday, July 10, in the SLO Mission Plaza from noon to 6 p.m. with headliner Taylor Dayne, the multi-platinum recording artist who in her career has scored 17 Top Ten hits on Billboard’s charts, including, most recently, 2008’s “Beautiful.”

The family-friendly event also features a bounce house and obstacle course, carnival games, face painting, an adult beverage garden, and an eclectic lineup of dynamic performers. All are welcome to attend an After Pride Party at Novo Restaurant.

On Thursday, July 7, Steve Key’s Songwriters at Play singer-songwriter showcase features Maia Sharp at The Porch at 6:30 p.m. Her songs have been recorded by Bonnie Raitt, The Dixie Chicks, Cher, Art Garfunkel, Keb’ Mo’, Lisa Loeb, David Wilcox, and others.

On Sunday, July 10, Kat Devlin headlines the Sculpterra showcase beginning at 1 p.m. She’s got a Celtic-country sound, and fans of Ani DiFranco, Dar Williams, and Neko Case will find much to like here.

Kate Gaffney headlines the Tuesday, July 12, showcase at Kreuzberg. A native of Philadelphia, she now lives in the Bay Area and is a festival fave whose husky voice recalls Grace Slick and Chrissie Hynde.

On Saturday, July 9, Chamisal Vineyards will be host to a benefit concert for the SLO County Food Bank Coalition from 2 to 7 p.m. with two of our finest local bands, Still Time and Sparrows Gate. Bring blankets or low-back chairs and feast on food from Full of Life Flatbreads pizza and salads, Jose’s Famous tacos, and Doc Bernstein’s Ice Cream … or bring your own lunch. Tickets cost $25 and include entry and three tickets, each valid for a 1-ounce taste of wine. If you donate $5 or more to the Food Bank, you’ll receive an additional taste ticket. Call Brette, assistant hospitality manager, for tickets at 1-866-808-9463 or visit store.chamisalvineyards.com.

The Mark Pietri Trio will bring their NYC-style jazz to the SLO Jazz Festival’s Court Street Concert Series on Saturday, July 9, from noon to 3 p.m. They’ll appear on the second floor of the Court Street Center.

Local world music act Up in the Air is featured at the next Castoro Cellars Lazy Locals Free Outdoor Concert on Sunday, July 10, from 1 to 4 p.m. Enjoy this eclectic and versatile local band with a picnic with friends. Wine will be available for purchase.

On Sunday, July 10, check out “Jews and Jazz,” an event at Congregation Beth David with local jazz aficionado and radio host Fred Friedman, who’ll tell the history of early jazz, focusing on Jewish jazz musicians, songwriters, and composers. The event runs from 3 to 5 p.m. and costs $10 ($7 for students with ID).

On Sunday, July 10, the Famous Jazz Artist Series at the Hamlet welcomes the most honored and admired jazz accordionist worldwide, Frank Marocco. Known as a jazz virtuoso, he’s been the most recorded accordionist in Hollywood recording studio history with movie credits such as Henry Mancini, John Williams, Elmer Bernstein, Quincy Jones, and Michele Legrand to name but a few. Luther Hughes and Paul Kreibich, along with series co-producers Charlie and Sandi Shoemake, will join the fun. See them at 4 p.m. for $15, 7:15 p.m. for $12, or see both shows for $20. Call 927-0567 for reservations.

On Sunday, July 10, at 7 p.m., the Pewter Plough Playhouse presents “Sonnets and Strings,” an experimental, one-night show, where attendees will be treated to a variety of exquisite poems, classical guitar compositions, and Arabic folk songs performed by Samuel Shalhoub and Martha Raymond. Donations of $5 to $10 will be accepted at the door.

The Painted Sky Concert series presents the indie folk pop of Shelby Earl on Thursday, July 14, at 8 p.m. in Painted Sky Recording Studios. Don’t let her countrified name fool you. “She’s a city girl with a ‘world-class voice’ and a universe of stories to tell,” said promoter Steve Crimmel. “I first heard about Shelby from her mom Sharon, who lives right here in Cambria. After listening to her debut album Burn the Boats, I felt that we needed to have her in concert and show support for this gifted artist.” Tickets cost $10, available at Cambria Business Center, Boo Boo Records, or by calling 927-8330.

And to those who sent submissions that didn’t make it in, sorry, but I ran out of room this week!