What's it rated? Not rated
What's it worth, Anna? Full price
What's it worth, Glen? Full priceWhere's it showing? Virtual screening starting Dec. 4, 7 p.m., until Dec. 6 at midnight, through the SLO International Film Festival via goelevent.com/SLOFILMFEST/e/VinylNation

Directors Christopher Boone and Kevin Smokler take viewers on an exploration of the resurgence of vinyl records. Once a ubiquitous music medium, records all but vanished in the '80s with the emergence of CDs. However, a niche but ever-growing market has returned as more bands have turned to releasing their music on vinyl, and a diverse range of record collectors have turned this nostalgic format into an obsession. The film is offered through virtual screening from the San Luis Obispo International Film Festival. You can buy single view access for $12 or access for two or more viewers for $15. There's also a $25 watch-at-home kit that includes virtual screening access, a random vinyl record, popcorn, and a beverage option of local beer, Sans Liege "3-Day Weekend" Pinot Noir, or nonalcoholic local cider. Ticket purchasers will also have access to a pre-recorded Q&A session hosted by Palm Theatre owner Jim Dee with the filmmakers and several San Luis Obispo record store owners, who will have fun talking about their love of vinyl. (92-min.)

Glen If you have a sizeable record collection and you've ever had to move to a new home, you know well the impulse to give up your collection—bulky, heavy, fragile, the struggle is real! For a while there, people did relinquish their collections in droves. In the '90s, I worked in a record store and people would come in with boxes of records, mostly classic rock, and sell them to us usually for about a dime a record. They were, by and large, worthless. But in the past decade or so, records have become hip again, and Vinyl Nation traces the improbable resurgence of vinyl in this fascinating documentary that interviews musicians, record store owners, record collectors, and record manufacturers, and most importantly, it dispels the myth that record collectors are nerdy white dudes who know way more about music than you. Women and people of color have also found their way to record collecting, and to hear collectors explain in reverent language the magical experience of handling and playing these objects and how it deepens their experience and appreciation of music is beautiful. If you're already into vinyl, you're going to want to see it. If you're not, be careful! By the end of this film, you may have found a new way to spend your discretionary income! 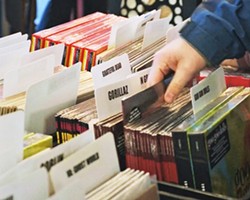 Anna I have vivid memories of my little kid fingers thumbing through my parents' vinyl collection searching for what I could talk my dad into putting on the turntable next. It was my introduction to "their" music—The Mamas and the Papas, Leon Redbone, Buddy Holly—all playing out in that gloriously tenuous medium where a scratch or an errant bump of the table can render the whole thing ruined. As a teenager, I would don Princess Leia buns and black lipliner as I ventured to Amoeba Music in San Francisco and hunted till my hands were dirty and I had a pile of vinyl to slog back home. Now it seems every artist is hip to the fact that as impractical and fragile and expensive as it may be, their audience wants to hear their sound the old fashioned way—even the kids! This documentary is on its face a love story to the medium and the passion of the people behind it. Beyond that, it's an exploration of the process of making and history behind vinyl music. Through interviews that go far deeper than the question of why people collect, love, and covet this stuff, we meet a host of audiophiles who aren't afraid to blow the top off the stereotypical collector. Some of those collections make our wall of records look like nothing!

Glen Whenever I begin to question if we've gone too far with our collection, I remember the time I saw KCBX Music Director Neal Losey's private record collection. For some, it's an obsession. This documentary makes clear, however, that anyone can get into records. They interview people from Crosley, the inexpensive suitcase turntable company that Urban Outfitters carries; a guy who bought a record manufacturing company as an investment and almost lost it all ... until vinyl made a comeback; and buyers and vendors at a huge annual record swap meet—interesting people who try to explain how this 150-year-old medium is suddenly back. The music industry has been ravaged by the internet and technology, but performers are realizing that people want something tangible, something they can hold in their hands instead of download to their phones and computers. Vinyl is back, and I'm guessing it's back for good.

Anna I knew that creating vinyl records is a big undertaking—laborious and fraught with error—but didn't know the actual process of it, and this was a fascinating look at that aspect as well. The interviewees, many of whom are record store owners, talk a lot about what collectors actually look like beyond the stereotype of Comic Book Guy from The Simpsons. They're all over the map in terms of age and gender and color and music taste, yet they all share this passion and it connects them when nothing else about their lives would. I was surprised at how emotional I felt hearing them talk about their passion, but that really is what it comes down to: Music is the great unifier. This is a great watch for anyone but especially for those of us who appreciate the simple act of putting needle to disc and getting lost in the grooves. Your heart will feel full after Vinyl Nation. Δ