The 10th of November marked the anniversary of the first two of a string of sexual assaults that rang in a season of fear for young women in San Luis Obispo last year. 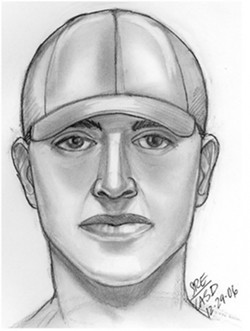 # On that night, a man in his 20s approached two separate women, who were walking alone in the Cal Poly area, and attempted to rape them. Both fought him off.

Three similar but increasingly aggressive attacks would follow over the next five months, resulting in one rape and a slew of unanswered questions.

Just two days shy of the anniversary of the first attacks, a young woman walking alone in the Cal Poly area was raped in the street at about 6 in the morning.

This latest attack--if perpetrated by the same man--would stick out as the most brash and reckless yet. Police reported that the young woman was walking alone in the area of Casa and Foothill when she was grabbed from behind and raped near the sidewalk. The woman was unable to see his face, but identified a large red, green, and blue tattoo on his left forearm. She was finally able to fight off the attacker and get help at a nearby store.

"If it is the same guy," said SLO Police Lt. Bill Proll, "this would be the boldest attack. It happened literally right on the highway with traffic going by and people getting ready for work--it was 6 in the morning."

Police have never positively linked the five earlier attacks to one man, but the mode of attack and witness descriptions have been consistent enough for officers to suspect a lone perpetrator. In January of this year, police issued a composite sketch of a white man in his early to mid 20s, about 5 feet, 10 inches with short brown hair and a medium build. Following that, the assaults--at the time four in six weeks--abruptly stopped and no arrests were ever made. Then in May, a fifth woman was attacked in the area of Nipomo and Leff. Then nothing.

The most-recent assault bears strong similarities to the others. The limited height, weight, age, and race description is consistent, and the circumstances are similar. The mode of operation seems to be that an unarmed man finds a young woman walking alone. In some instances, the attacker has contacted the woman with a question or some innocuous comment--police wouldn't say if that was the case here. The attacker then ambushes the woman from behind and wrestles her to the ground. Four women have been able to fight off the attacks. Two have not. In both of the latter instances, the rape was shockingly bold. Both women were plainly in the public view--outside, near a sidewalk--and one woman was raped steps away from her car in the pouring rain.

Lieutenant Proll said that police were able to collect some physical evidence against this most-recent attacker, and the distinct tattoo--described only as having a lot of lines--has produced several leads. Still, officers are trying to put together pieces from a puzzle that is scattered all over the city, and for all the similarities between the six assaults, there are some differences in the mode of attack for this latest case. And the lack of a description is still troubling for officers.

"They are similar in the limited basis that it was a female walking alone, and she is attacked from behind," Proll said. "The hard part of the investigation is that they have been sporadic in time and place. It's not the same as someone who lives in a neighborhood and goes out and commits a crime, and can just run home a few blocks away. They're all over the city."

The similarities may have their weak points, but six separate and public forced assaults in one year in a population the size of SLO's presents an amazing coincidence, if not a serious problem. Police have been reluctant to publicly declare the presence of a violent sexual predator in the area. In December last year, after two women were assaulted and a third was raped, the police kept the incidents essentially quiet and denied to New Times that the crimes were being investigated with one perpetrator in mind. Not until the fourth assault occurred did police announce a possible link.

The department is continuing to take a conservative approach to the investigation.

"The manner of this one is maybe why we think that it may not be the same person," Proll said, referencing the most recent assault. "But there are other things that make us think that it is."

The SLO Police Department stepped up patrols in the neighborhood where the Nov. 10 attack occurred, and have checked statewide programs that monitor parolees with GPS devices, so far to no avail. As always, women are advised not to walk alone at night, and to stay in heavily trafficked areas.