Courtesy Photo By Richard Fusillo DANCING IN THE STREET You can virtually tour Richard Fusillo's new photography exhibition, We All Bleed, on the San Luis Obispo Museum of Art's webpage, where you can also hear the voices of those involved.

Photographs by Richard Fusillo, as well as local activists' voice recordings and a collage of protest signs, are currently on display at the San Luis Obispo Museum of Art in the We All Bleed exhibit, which can be toured virtually on sloma.org. The exhibition will be up through Sunday, May 2, and was created in collaboration with R.A.C.E. Matters SLO. A SLO Motion Film event on Saturday, April 24, features SNCC, a documentary about the Student Nonviolent Coordinating Committee. Tickets are available at slomotionfilm.com.

On May 25, 2020, George Floyd died in police custody after Minneapolis police officer Derek Chauvin knelt on his neck for more than eight minutes as he lost consciousness. Floyd had been arrested for allegedly using a counterfeit $20 to purchase cigarettes. His death was another in a long list of officer-involved deaths of Black men, and it ignited the long-simmering Black Lives Matter movement that traces its inception to the 2013 acquittal of neighborhood vigilante George Zimmerman for the shooting death of 17-year-old Black boy Trayvon Martin.

"Following the murder of George Floyd last May, a dozen activists showed up on the corner of Marsh and Broad a few days later holding signs and chanting 'No Justice, No Peace,'" recalled photographer Richard Fusillo. "This was the first protest for the local BLM movement and also the first time I documented it. Almost a week later, the same dozen turned into over 3,000 individuals standing in front of the San Luis Obispo Courthouse, spilling out into the streets. The days in between were when I decided I wanted to be involved more; more than a Black square, more than just a single donation.

"I figured one of the best ways to be in solidarity was to honestly document the scenes unfolding in front of me in hopes to uplift voices of the BIPOC community here, and to capture history in the making," he said. "I'm thankful for every individual I encountered, listened to, watched, and am truly inspired by the local activists here."

Images Fusillo captured, as well as activists' voice recordings and a collage of protest signs, are currently on display at the San Luis Obispo Museum of Art and can be toured virtually on the SLOMA website, sloma.org. The exhibition will be up through Sunday, May 2, and was created in collaboration with R.A.C.E. Matters SLO. There's also a film event with SLO Motion Film on Saturday, April 24, screening SNCC, a documentary about the Student Nonviolent Coordinating Committee.

"It was a pleasure to work alongside Richard Fusillo and SLOMA," said R.A.C.E. Matters SLO co-founder Courtney Haile. "We joined this collaboration because I knew that in addition to being a talented artist, Richard is a trusted friend to many activists in his images—along with being an activist himself. We gave input and feedback during the planning process, and I am super excited for the April 24 screening of SNCC in collaboration with SLO Motion Films."

Was Fusillo surprised by the scope of the local protests?

"At first yes, but then after attending and photographing all the individuals involved, I knew it would just keep growing," he said. "That's the power of community. SLO and its community needed to experience a larger scope. The local protests were sort of an awakening for many."

The protests were, and continue to be, very divisive, especially when protesters marched onto Highway 101, closing it to traffic—twice—in July of last year, which also resulted in arrests of local activists, most notably Tianna Arata. What does Fusillo say to critics of tactics like shutting down Highway 101?

"This can be a difficult question, but I will start off by saying I was there," he said. "The answer to me is simple: It got attention. When protestors gather on busy streets, stop at intersections, and shut down highways or freeways, it is to cause disruption and discomfort.

"Marching and stopping on Highway 101 is dangerous, and we must remember that most protesters don't wake up one day and say let's hop on 101 just to piss people off. No, they are marching on that street to not only let out frustration but also bring their discomforts to us," he continued. "If being stopped on the highway frustrates you, I'm sorry to say, but good, ... that was the point." 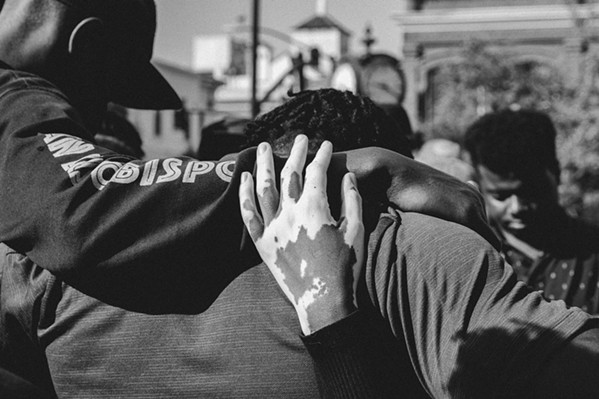 One Highway 101 closure ended when the protesters faced off against SLOPD in front of the Walnut Street police station, where officers eventually fired tear gas and rubber bullets to disperse the crowd. Much has been made about police actions and police descriptions of the protests. Does Fusillo think the police have been honest in their assessment?

"Without going into details, no," he said matter-of-factly.

All the photos in the We All Bleed collection are black and white. Why?

One of his most impacting images didn't make it into the SLOMA exhibition, but it's viewable on his website, fusillofoto.com. It depicts a circle of people, one with a hand with vitiligo, which seems to communicate in a profound way how random skin tone is. Was this shot a happy accident?

"First, I'm glad you saw that image," Fusillo said. "It didn't make it on the walls at SLOMA but is a part of the collection We All Bleed. I don't stage my shots and am constantly scanning the area I'm photographing when being a journalist. You never know what's happening all around you until you look. So, yes, this was a happy accident in a way.

"I remember this moment was during a Free Tianna protest in front of the courthouse, and for a moment there was complete joy in the crowd. A small group of Black, young activists were huddled amidst the crowd focusing on one another, talking quietly before dancing. I happened to turn around at the right moment."

Many of Fusillo's images are simple yet deeply evocative, such as a charred American flag. How does he know where to turn his eye?

"I learned how to capture spontaneous, candid moments while touring with bands and the music scene I used to photograph a lot in the past," he said. "Live shows, van life, and not knowing what town is next really trained my eyes to constantly scan what's happening around me every time I'm holding a camera. Being on the streets, capturing protests, is very familiar to that."

What does he hope people will take away from his show?

"I hope people see how important small community activism is and that it needs to continue to grow," he concluded. "All Black Lives Matter." Δ