Pete Pepper left Vietnam in the spring of 1968, after serving with the 101st airborne division for more than a year and a half, first as a lieutenant and then as a captain. But leaving Vietnam was not the same as forgetting what had happened there, what he had done and seen and the people who had served beside him. So he returned.

In 2002 Pepper returned to Vietnam with his son, and again in February of 2010 when he rode a motorbike across the country. But the trip that’s most poignant is the one he took with four of his fellow paratroopers in April and May of 2009. He hired Randy Allen of Rand Productions and photographer Vincent Shay to document their experience. Pepper hopes to complete a film shot during their travels by October. In the meantime, Shay is exhibiting some of his photographs of Vietnam at the Photo Shop through Aug. 15.

The Vietnam depicted in Shay’s photographs is vibrant and personable, any evidence of war lingering in the shadows. Shay describes the exhibit as comprised of “the scenic stuff.” The photographer had traveled before, but never to Vietnam, and never with veterans who had waged war in that particular location. Mostly, Shay had worked on surfing and other outdoor projects.

“Every photo has a story behind it,” said Shay of his “Glimpse of Vietnam” images. And many of the typical surface how-I-got-this-photo stories have another narrative that dates back more than 40 years. “Friendly Bridge” depicts a smiling Vietnamese man straddling a motorcycle in the center of a bridge. Pepper had been stationed on the other side of the structure, but you’d never know it to see the photograph.

The travel itinerary was dictated by the soldiers’ experiences during the war—a village where a woman whose father had been killed by one of the soldiers resided, a monastery where a soldier feared he had accidentally killed a French priest. When Pepper first returned to Vietnam with his son, some Vietnamese citizens asked him to indicate on a map the places that he had served. He wound up circling 19 locations.

“We moved around on average once a month,” explained Pepper, without a trace of resentment. “They liked to use us to stir up trouble. When they thought there was a high concentration of the enemy, they sent us in to see if it’s true.”

Shay’s photographs were a side project during the journey, and his attitude about the images is humble.

“We didn’t wait for good light,” he explained. “We were running. We were going. I don’t think anyone else couldn’t do it. But the photos had the experience tied in.”

Shay’s photos line two walls at the Photo Shop, and the shorter of the two walls is filled with black and white photographs, mostly portraits of faces, and hands. He captured the images in a small village they visited near the end of the trip; Shay wouldn’t reveal why the group was at the village, except to say that it was significant to at least one of the soldiers. Two of the photographs taken in this village are sisters, or, at least, their subjects are. An elderly woman smiles out from the photograph beside an image of hands clasped together, skin folded over with age.

But the longest wall is filled with color—long streaks of color reaching out of the darkness to indicate the bustling nightlife
of Ho Chi Minh, formerly called Saigon.

“This is the first night we got into Ho Chi Minh,” he narrated. “When we got there we were just overwhelmed. We’d never seen such utter chaos.” The photographer’s disorientation is reflected in the title, “Controlled Chaos.” In “Capitalism” a laughing woman is in the act of blowing a water buffalo horn, one of the many, many items for sale in the country. Smiling, friendly faces are everywhere, the only exception being Shay’s favorite photograph from the trip, titled “Glimpse.” A young girl looks uncertainly at the camera from her mother’s arms. Though her mother is smiling beneath a wide-brimmed hat, the image reflects the country’s bittersweet relationship with the west. 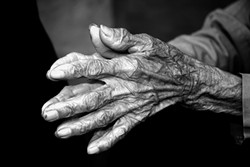 As part of his effort to lay old demons to rest, Pepper corresponded with an expatriate vet now living in Ho Chi Minh, and arranged to have the party of American vets interact with the Vietnamese soldiers they had fought against.

“We got to know them, got to put a face to the enemy, got to demystify them,” said Pepper.

For nearly 40 years Pepper had no contact with the men he had commanded. He worked, owned a video production company, raised a family, and retired in San Luis Obispo.

“I didn’t have contact with these vets until the winter of 2004,” said Pepper. “I thought no one was meeting and just couldn’t find folks. And they found me about six months after my wife died. Their timing was impeccable; I needed to be found.”