If you follow the Central Coast music scene, these are a few names you might be familiar with: James Scoolis of Burning James and the Funky Flames, banjo queen Erin Inglish, Natalie Haskins, Donna Lu of the Cowtippers, Jody Mulgrew, bluesman Craig Luis Dingman, Noach Tangeras, and Kelly Atwood of AC/DC tribute act High Voltage.

They're but a handful of the dozens of singers who have been instructed by Johnpatrick "JP" Maddex, who's taught voice for 41 years, including the last 14 at Morro Bay's Central Coast Music. 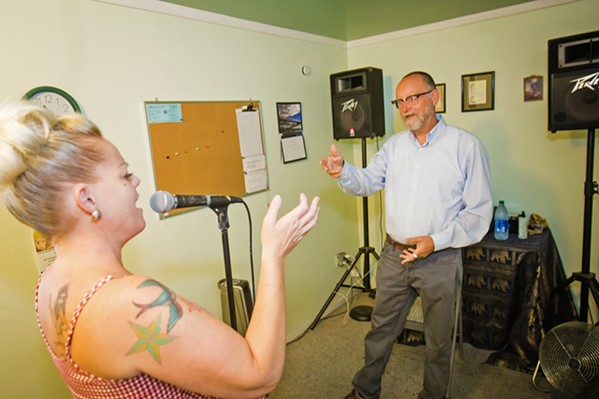 "I teach my own style," Maddex explained in a recent phone interview. "I don't teach the standard style. A lot of the people you see out performing have worked with me in the past. In fact, I think if you go through the list of the last 10 years of the New Times Music Awards, I've probably had about half a dozen of my students as winners."

Maddex is also connected to some recording studios too. For instance, Rob Vermeulen of Robbo Music in Morro Bay will frequently call on Maddex to help someone who's in to record an album.

"He'll find that they may not be quite vocally what they need to be, so he'll set them up with me and we'll tune them up," Maddex explained.

Maddex's own training started in high school, and in his early years he worked with nine different teachers, absorbing their techniques, including an "intensive" course of study at Stamps Blackwood School of Music, at Kentucky's Murray State University.

"I started singing as a kid in gospel quartets," Maddex, 61, explained. "I was the lead singer, and we opened up for people like the Statler Brothers. I did that for a long time, but in 1980 I retired from doing that and started teaching voice on the side. In 1999, I switched over to full-time teaching in Escondido at B&H Music."

He came to the Central Coast because his younger brother lived here and was having health problems, so he came to "help glue him back together."

He discovered owner Eddie Frawley of Central Coast Music and began teaching there.

"I don't perform anymore," he added. "I found that I was a teacher at heart. I was a teacher who could sing rather than a singer who taught. [Performing] is not my bliss. I can still do it, but I just so much enjoy teaching. I think I've had 89 of my students record albums. It's been really a fun career."

So, what makes Maddex different from other voice teachers?

"When you go into a voice coach, you'll stand in front of a piano and sing scales and make weird sounds—me-me-moo-moo—for maybe three quarters of the lesson, and then you'll work on a repertoire that they suggest to learn their curriculum. They have ways of teaching mechanics—breathing and placement," he said. "What I found through my experience on stage and training from other teachers, I developed my own style where I teach singing in a much more rubber-to-the-road way. It's a much more natural way of breathing.

"It doesn't feel like you're trying to do something; it just feels like you're just doing something," he continued. "I teach solid mechanics, but one of the things that was missing in my education was the fact that the audience expects you to be able to do those things. If you're a carpenter, they expect you to know how to use a hammer and a saw, but that's not what they remember you for. They remember you for your connection with the audience and your ability to tell a story." 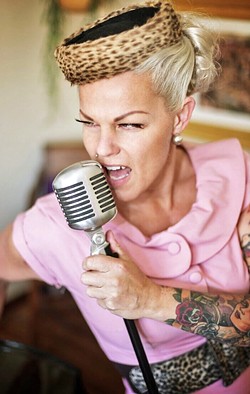 One of his students is MarciJean Fambrini of MarciJean & the Belmont Kings, the popular jump blues and swing band.

"When I was referred to Johnpatrick, I asked myself if I thought going back to yet another vocal coach would do any good at this point in the game," Fambrini explained in a text message. "I started singing and training when I was 5 years old, numerous vocal teachers, vocal coaches, theater coaches, choir directors, singing, dancing, acting workshops my entire youth—the list goes on of the training I've had over the last 42 years—all of them helpful only in the way that a workout coach or partner might be at the gym, doing the same exercises and using the same equipment.

"I thought maybe it was time to go through the same routine as always," she continued. "Your typical scales and breathing exercises and ridiculous vocal acrobatics, which includes singing the words bumblebee in every key until you crack while your lips turn numb—basically paying for a cheerleader to egg you on," she continued.

"In the first five minutes of our meeting, he informed me that there would be no such jumping jacks or scales or any of the stuff that bored me to tears but that we were going to jump right into the material that I sing with the Belmont Kings. I was delighted."

Instead of taking the long way around, Maddex cuts to the chase!

"I spend time in the lesson getting the person to understand that if they are the person in the song, if they feel the way the person feels, then the audience will feel that way," Maddex said. "What happens is when you do that, your body knows how to make that sound. In other words, you'll relax into your technique rather than trying to do your technique.

"That's the difference in the way I teach. It's much more organic," he continued. "People will almost always say after their very first lesson, 'This is so much easier than I thought it was going to be, and my voice sounds instantly different than it did before.'"

Too true. According to Fambrini, "He asked me to describe how I interpreted 'singing from the diaphragm,' a basic tool singers use. When I showed him how I've been doing it for 42 years, he made some very unorthodox changes and completely blew my mind. It's not at all how I was taught. My ability to hold a note at least doubled within the first 10 minutes of our first session," she said. "He continued some unorthodox adjustments on how I had normally been taught and proceeded to unlock some much ingrained terrible habits that I had picked up from different teachers over the years.

"On top of all that, my biggest enemy vocally didn't lie within the secrets of the diaphragm but my psyche," Fambrini added. "I felt like he became more of a vocal therapist. Turns out I needed a shrink more than I needed scales. His coaching is more like therapy, and his tools helped me become comfortable in my own skin on stage and improved my ability to connect with the audience and calm my nerves." Δ