Vote by wallet: Polarizing politics play out in the local economy as residents put their money where their values are

As a few hundred SLO County residents prepared to march through Grover Beach and Arroyo Grande in support of the Black Lives Matter (BLM) movement in early June, a few business owners were getting ready for what they feared could become violent riots.

Some boarded up the windows of their businesses or closed up shop, and others, including John Hackleman, owner of the The Pit Martial Arts and Fitness, took more drastic measures. Armed with guns and walkie-talkies, at least two of Hackleman's friends stood on the roof of his downtown Arroyo Grande gym, while other unarmed individuals stood outside the business on ground level. 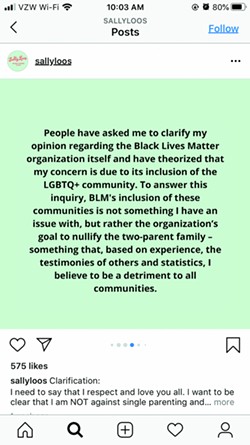 Although Hackleman claims the guns weren't loaded and that protesters didn't even walk past his businesses that day, photos of the gunmen on his rooftop spread quickly on social media, along with emotive and seemingly anti-BLM videos Hackleman posted before and after the June 5 protest.

That led many to call for a boycott of The Pit.

The owner of Sally Loo's Wholesome Café in SLO, Jennifer Fullarton, faced a similar reckoning after she posted anti-BLM content to her once public personal Instagram account.

Screenshots of those posts went viral on June 12, leading hundreds of community members to declare online that they'd never set foot in Sally Loo's again. An apology Fullarton posted to the Sally Loo's account days later—in which she clarified that while she's not racist or opposed to the LGBTQ-plus community, she can't support what she said is BLM's "goal to nullify the two-parent family"—only seemed to make things worse.

Now lists of other local businesses that supposedly don't support the BLM movement or that believe the COVID-19 pandemic is a hoax are circulating online. On the other hand, businesses that too aggressively enforce face covering rules are being marked as places conservatives should avoid.

Such word-of-mouth campaigns are a local trend that San Luis Obispo Chamber of Commerce President Jim Dantona said has been playing out for years but is now being exacerbated by social media and our increasingly polarized politics.

Technology and social media have made it easier than ever for everyone to make their opinions—and the opinions of others—known, and since the onset of the COVID-19 pandemic and the death of Minneaopolis resident George Floyd, it feels like everyone has something they want to say online. Business owners aren't immune to having thoughts and feelings, but publicly taking a political stance as the face of a business comes with the risk of losing customers.

"Capitalism is still a democracy in that your vote is your dollar," Dantona told New Times. "Everybody has the freedom of speech, but that doesn't come with the freedom of repercussions."

The idea of putting your money where your values are is one that's caught on more in recent years, Dantona said, at least partly because social media makes it easy for businesses to share their views and for customers to react. According to a 2017 survey conducted by Sprout Social, a software company dedicated to social media analytics, roughly 66 percent of the 1,000 U.S. consumers surveyed said it's important for brands to take a public stand on political issues. About 61 percent said it's important for that stance to be pushed out on social media.

That's good for consumers who Dantona said should be supporting businesses that champion beliefs and ideals that align with their own. It's also a good way to hold business owners accountable, he said. Had there been gunmen at The Pit during a protest in the '80s, Dantona said protesters might have witnessed it but would have had to have a real camera on hand to take a photo, and even then the photo would have been difficult to disseminate.

But there are, of course, downsides to the efficiency and permanency of social media.

Dantona said he wonders how accurate these lists of local businesses that support this and oppose that really are. Content on the internet is often untrue or taken out of context, and he hopes community members will do their own research before vowing to shun any local businesses for good, especially at a time like this, when small businesses are just trying to recover from coronavirus-related closures and hits.

And sometimes, he said, businesses face backlash for things they have no control over.

Though there's now a state mandate requiring Californians to wear face coverings in public, some SLO County residents online say they'll attempt to go to a number of local businesses without masks, and only support those that allow it. A lot of local businesses in SLO were also criticized for boarding up their windows during peaceful BLM protests, even though Dantona said that in some cases it was the owner of the building—not the business owner—who decided to board up.

Dantona said it's important that consumers have their facts straight before taking to the internet.

"Our business owners don't need anything else thrown at them," Dantona said.

That's Hackleman's biggest issue with the community response to his way of protecting The Pit: He doesn't feel people interpreted his actions and words correctly.

He wasn't sure what the June 5 protest would be like, and had heard about protests turning violent or destructive in other cities throughout the nation. After COVID-19, which Hackleman said resulted in about $50,000 in losses over the course of three months, he couldn't afford any damage to his building.

Hackleman said he's not racist—some of the people protecting his business on June 5 were people of color, he said—but that's why many people say they're boycotting his business.

"If you say it's racist because John had two Asians and two Mexicans protecting his gym," Hackleman told New Times, "you have a screw loose."

"I think the people who are boycotting are the worst kinds of bullies in the world," Hackleman told New Times. "Because they're trying to make someone lose their business."

As a former small-business owner herself, Storton said she gets it. If she still had her business today, she'd be posting signs in support of the BLM movement all over, and she'd expect to lose business over it. No matter what side you're on, she said, there's no way everyone will agree with you. And while some businesses can afford to lose customers, others certainly can't.

"People with a small business are their small business," Storton said. "They are. They're just entwined. And I support them if they want to peacefully and nonthreateningly take a stand. But beware: There are consequences."

"A friend once told me, 'Never pass up an opportunity to shut your mouth.'" Δ