Vote no on Proposition 4

by Christine Lyon and Cheryl Rollings

Proposition 4—the so-called parental notification initiative—is a third attempt by right-wing extremists to amend the California Constitution. Unfortunately, Proposition 4 is even more dangerous than the preceding two initiatives because it damages families, as well as teens. Proposition 4 is perhaps the most deceptive issue on the ballot this fall and, unless we defeat it, thousands of California’s most vulnerable teens will be put in harm’s way.

Of course parents rightfully want to be involved in their teenagers’ lives. They want their daughters to come to them no matter what the problem, and especially with something as sensitive as an unplanned pregnancy. The good news is that most 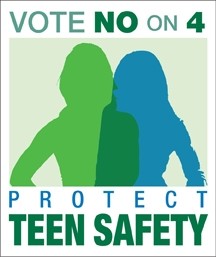 teens faced with a pregnancy do go to their parents. Studies have shown that right now in California, without a law like this on the books, 70 percent of teens already go to their parents to help them make the decisions that are best for them.

But, those teens who can’t turn to their parents often have a very good reason. Sadly, they may live in homes where communication about sensitive issues is not possible they may fear being kicked out, beaten, or worse. That’s why we need to protect the teens who need help the most. In the real world, we know that government can’t mandate family communication, and no law can force teens to talk with their parents.

Proponents claim that the alternative family notification provision in Proposition 4 addresses the issue of teens who are unable to talk with their parents by allowing them to notify another adult family member. But this notification is nothing more than a state-scripted form letter sent to another relative who may not even live in the same town. Proposition 4 contains no requirement for counseling and no requirement that the other adult help the teen when she is in crisis.

In reality, that alternative family notification is a cruel process that would force a pregnant teen, who wants to notify another family member, to sign an affidavit claiming a history of mistreatment by her parents—mandating a report be filed with law enforcement—at which time an investigation would ensue. A scared pregnant teen who cannot talk to her parents is not going to go to a doctor, report her parents for mistreatment, and then return home to wait for law enforcement to knock on her door!

The proponents will also point to the judicial bypass option as a way to protect teens who cannot talk with their parents. That option is absurd. A scared pregnant teen who can’t tell her parents, and doesn’t want to accuse them of mistreatment so she can notify another family member, isn’t going to navigate a crowded court system, file forms with the court, schedule a hearing, and reveal intimate details of her personal life to an unfamiliar judge in an impersonal courtroom. She doesn’t need a judge. She needs counseling and safe, timely medical care!

Think about it. These options may leave a scared teen feeling desperate and trapped. A desperate teen, instead of seeking counseling and the safe medical care she needs, may take desperate measures and harm herself or even resort to the back alleys. In one terribly sad case in Michigan, a state with a parental involvement law, a teen tried to self-induce an abortion by asking her teen boyfriend to hit her in the stomach with a baseball bat! We can’t let those kinds of tragedies happen here in California.

So why is Proposition 4 back on the ballot for a third time? Make no mistake about it, supporters of Proposition 4 are the same people who want to overturn Roe v. Wade and outlaw all abortions. Despite what they say, Proposition 4 isn’t about parental rights, it’s about their political agenda.

The answer to teen pregnancy is not a constitutional amendment, but strong, caring families, parent-child communication comprehensive, medically accurate sex education, including information on abstinence and access to contraception. These are the real solutions. Proposition 4 won’t protect our teens, but it will put the health and safety of our most vulnerable teenagers in danger—and it threatens a woman’s right to choose. Please join doctors, nurses, teachers, school counselors, and millions of California parents and vote no on Proposition 4—one more time!

Cheryl Rollings is president and CEO, and Christine Lyon is the vice president for External Affairs, of Planned Parenthood of Santa Barbara, Ventura, and San Luis Obispo Counties, Inc. Contact them at 963-2445, Ext. 125, or at ppsbvslo.org.