Voyagers is Lord of the Flies in space

Writer-director Neil Burger (The Illusionist, The Lucky Ones) helms this sci-fi adventure about a mission to reach a habitable planet 86 years away from Earth by spacecraft. Crewed by 30 young people, all conceived in a lab and raised in seclusion to mirror the lonely isolation of a multi-generational space journey with the idea that their grandchildren will fulfill the mission, they descend into paranoia and distrust 10 years into their voyage. Can they pull back from the brink of madness and save their species? (108 min.) 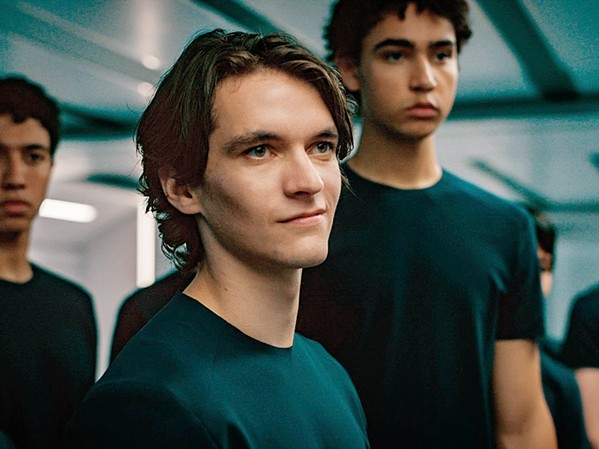 Glen Voyagers is essentially Lord of the Flies in space. What is our nature? Are we inherently altruistic and cooperative, or are we naturally tribal and violent? The film opens with the crew being raised in a facility that will mimic their long trip, which is being overseen by Richard (Colin Farrell), who deeply believes in the mission and sincerely wants to keep these young adults safe. As part of the mission protocol, however, the crew is administered "the blue," a liquid designed to repress their sexuality and increase impulse control. Things start to go sideways when two of the young men—Christopher (Tye Sheridan) and Zac (Fionn Whitehead)—discover the truth and begin pouring the drug cocktail down the drain. Soon they grow more boisterous, competitive, and in Zac's case, violent. As the rest of the crew also begins to refuse "the blue," they split into tribes, and like the supposed "monster" in Lord of the Flies, there may be an alien entity on board. Obviously the story is derivative, but I was engaged throughout. It's an interesting little potboiler that will appeal to adolescents.

Anna If you've ever dealt with a snotty teenager who obviously knows everything about everything, you've probably experienced the constant feeling I had during this movie—the desire to drag them out by the ear and punch them right in their smug face. Zac is such a hateable jerk, and once he isn't dulled down by "the blue," his actions are downright horrible. The thing that keeps order in this world of budding adolescents is Richard and the protocols set in place by the system they were raised into. These kids never experienced the outdoors, were designed from the eggs and sperm of the "best of the best" back on Earth, and have one purpose—to have kids so their kids can have kids, and those kids will be able to continue the species on another planet. Perhaps a noble life mission, but one that is certainly tainted when free choice is removed. There's Christopher, who starts to notice the opposite sex and gets more competitive with his wrestling, but who mainly stays a good and altruistic being even when chaos reigns. His counterpart, Zac, is anything but good, and bravo to Whitehead for embracing and becoming a character so incredibly irredeemable. He had me clicking my tongue, anger-sighing, and straight-up shaking my head at the screen. It's very Lord of the Flies and never feels particularly original or unpredictable, but I was certainly paying attention to that screen from beginning to end. It's surprisingly riveting.

Glen Whitehead is really good at playing bad. His big break came in 2017 when Christopher Nolan cast him as Tommy, the young soldier trying to get home in Dunkirk. Johnny Depp's daughter, Lily-Rose Depp, also appears as Sela, the ship's chief medical officer, over whom Christopher and Zac clash. Other than Sheridan and Farrell, however, most of these actors are relative unknowns, but they hold their own in this brisk and gripping story. It's an age-old question: Are human beings inherently good or bad? And the film's answer is both. Even Christopher struggles to overcome his impulses. Zac, on the other hand, is much more charismatic, and his cult of personality draws most of the crew in because they're looking for an authoritarian figure to rely on. As in Lord of the Flies, a strong but malevolent leader can prod otherwise good people to do bad. The real tragedy of humanity is how easily it's led down the wrong path.

Anna Depp is also good here, as is Sheridan. The cast is solid, even the unknowns, but the storyline is predictable. It's certainly worth a watch, but I'd be happy paying matinee prices for this one and not much more. Farrell is his usual solid casting choice, but Richard's storyline takes a backseat to the adolescents he's the ward of. His role is to maintain order and ensure compliance, a challenge no doubt much easier when the kids were younger. The "alien" is an interesting mystery too, something that seems to be both a red herring and a danger. There's unidentifiable sounds, odd power glitches, and happenings around the ship that are easy to tie to an unseen enemy—one that Zac realizes he can use to incite fear and violence among his peers. It all comes to a head and things have to go really wonky before they can get sorted out, but like I said, it's pretty riveting. A dark theater is the perfect place to catch a matinee of this claustrophobic thriller; it adds to the atmosphere and keeps you engaged. Δ