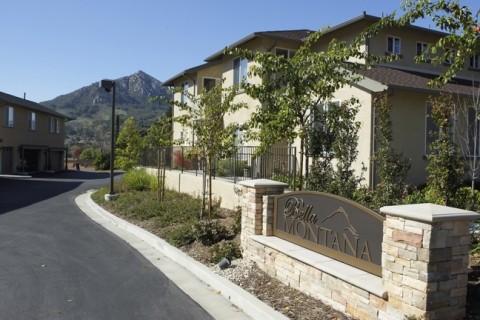 # In the summer of 2006, when Cal Poly opened up a waiting list for 18 homes in the first phase of its Bella Montana faculty housing project, 80 families got on the list and crossed their fingers in the hopes of winning a spot to be determined by lottery.

Pat Fidopiastis, an assistant professor at Cal Poly, was among the first to move into the neighborhood, even though he saw the market softening. Back then, the median home price in San Luis Obispo was more than $500,000--and presumably rising--so less than $400,000 for a three-bedroom, two-bathroom condo close to campus looked like a sweet deal.

Then the market started to turn.

Fidopiastis said that he could feel that the market was about to crash, even as he began mortgage payments on his new house.

"When we bought our home," he said, "the bloated housing market was at its peak, perhaps even slightly on its way down."

But when he considered his other options, which included renting in the current market or purchasing a run-down bungalow built in the '50s or '60s, he decided to go through with the Bella Montana move.

"Even if house prices fall 10 percent," Fidopiastis said, "that still means you will have to pay in the high-500s for one of these older 'fixer-uppers.' I say 'no thanks' to that. I live in a brand new home that is larger than most of these typical homes ."

Other applicants, however, weren't as enthusiastic about falling prices.

Of the 80 applicants, only 20 remained by December, when the first residents were due to move in.

As the market grew softer, Cal Poly opened the Bella Montana invitation to more people, widening the opportunity to include all Cal Poly employees rather than just instructors. The second phase of the development filled, bit by bit.

Still, while all 69 units that were planned have been built, officials say that about 25 are unfilled.

Bella Montana was born of good intentions in 2001, when the average home price in the city was a mere $330,000. At that time, administrators already considered the cost of buying a home to be a major obstacle to attracting and retaining faculty. Thus the Cal Poly Housing Corporation, a nonprofit development firm that's also responsible for the new on-campus student housing behemoths, formed to create affordable housing.

There are 10 different floor plans in 21 condo clusters in Bella Montana, and the location is hard to beat. The cheapest condos are $323,000. The most expensive--with three bedrooms and space for two cars--is close to $400,000, right across the street from Cal Poly. Arguably, the units' strongest selling point is the promise of community.

"One of the advantages of living here," Fidopiastis said, "is that your immediate neighbors in the complex are relatively like-minded individuals that work at Cal Poly. I mean that we all value a considerate, respectful, and clean community."

At the very least, it's the only neighborhood located in such close proximity to the university that can boast "no student housing."

The Bella Montana development is based on the ground-lease principle, similar to other faculty housing projects around the state. In essence, homeowners don't own the land where the house sits, they only own the stucco walls and everything inside. Since Cal Poly has owned the land since the '50s, it was able to build the project and still sell the units far below market value--about 25 percent lower when the bubble was at its breaking point.

Even with the crash, Reinhart said that the condos are still priced 20 percent below market value, but it's hard to know for how long.

Kirk Lesh, a real estate market economist for UC Santa Barbara and co-author of the 2008 SLO County Economic Forecast, said that there's no way to know how low the market will go, or when it will come back.

"The only way we know," Lesh said, "is when we get data that the prices start going up."

In January of 2008, while prices sank in many parts of the county, SLO city prices rose about 2 percent.

Yet prices aren't the only thing that limits interest in the condos. Cal Poly Housing Corporation imposed resale caps, after noting that Stanford's faculty housing was too expensive for most faculty members.

After considering inflation, Bella Montana homes can only be sold for either 80 percent of their appraised value or a maximum of 20 percent more than the purchase price. The figure includes adjustments for potential home improvements.

Plus, they can only be sold to Cal Poly employees, so while the houses will be affordable for the next round of house-seeking staffers, sellers will never see the same returns as in the real market.

But if Cal Poly professors were priced out of homes in 2001--and haven't received much in the way of raises since--how does the creation of "affordable" housing, which is more expensive that the average home in 2001, really create a solution?

The quick answer is that it doesn't. It only helps.

Reinhart said that $400,000 condos were not part of Cal Poly's vision for affordable housing, either.

"We were ready to break ground in 2002," Reinhart said, "and our sales price forecasts were much, much lower at that time. Unfortunately, a neighborhood group called the 'Neighborhood North of Foothill' challenged our [Environmental Impact Report] in the courts under the California Environmental Quality Act."

Reinhart said that the litigation didn't result in any changes to the project, but that the additional costs from the delay added about $100,000 to the cost of each home.

In 2005, when the corporation was finally ready to break ground, officials had to reassess whether or not the project still made financial sense, and with the market seemingly going nowhere but up, Bella Montana was looking more and more affordable.

Even if the market lags for a few years, Reinhart said, "it is likely that in 10 or 20 years, home prices will be much higher, and Cal Poly will be glad it built these homes when it did."

Kylie Mendonca is a staff writer for New Times. She can be reached at kmendonca@newtimessinlo.com.