On Dec. 14, 2020, longtime local fisherman Bill Blue sat next to his boat, Brita Michelle, on the dock in Morro Bay. The fishing season for Dungeness crab had been delayed due to "low meat quality" and was slated to open on Dec. 23.

"It's just lost days in the ocean so it affects everybody's business. People are used to having crabs in November for Christmas, and it gives a chance for the market to get established and for prices to settle out," he said.

Like many other fishermen, Blue doesn't just fish for one kind of seafood. He fishes for black cod and Dungeness crab with a small team—himself and two other men. 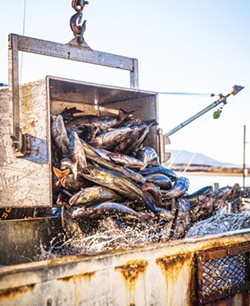 He's been in the industry since 1974, when he moved to Morro Bay at the age of 18 and got his first job as a deckhand. Three years later, he bought his first boat when, he said, it cost about $100 to be in business.

Things have changed a lot since then. A permit fee for a registered commercial fishing vessel for Dungeness crab currently costs $311.75. And now the Dungeness crab fishery has new regulations to contend with, which could delay season starts for more reasons than "low meat quality."

In 2014, according to NASA's Earth Data, a warm water "blob" stretched from Alaska to Mexico, increasing the ocean's temperature and triggering algae blooms that were harmful to marine life and humans.

Blue told New Times that increased levels of domoic acid—a neurotoxin produced by algae that accumulates in shellfish, sardines, and anchovies and can cause shellfish poisoning—halted the Dungeness crab fishing season at the end of 2015. In his 47-year career, Blue said, he can't remember a time before that when there was concern over possible domoic acid contamination in Dungeness crabs, but those concerns came up in 2015 and 2016.

Normally, the Dungeness crab fishing season starts in November and runs through June of the following year, but fishermen had to wait until March of 2016 to start their 2015-16 season.

Commercial and recreational fishermen typically fish for Dungeness crab off the coasts of Southern and Northern California. According to the California Department of Fish and Wildlife, the population decreases rapidly south of Monterey Bay. When fishermen got the "all-clear" to begin the season, Blue said they were all fishing in the Gulf of Farallones near San Francisco. Krill and other small fish (whales' prey), whales, and Dungeness crab mingled with fishing vessels and crab pots.

"At the time there was lots of feeding in the ocean. You could say the ocean was alive with everything—whales and crab," Blue said. "It was the perfect storm."

The National Oceanic and Atmospheric Administration (NOAA) reported 53 whale entanglements in 2015 and 55 in 2016. The entanglements were a marked increase from the reported 10 per year between 2000 and 2013. Fish and Wildlife's initial response to the entanglements, in 2017, was to recommend that crab-vessel permit holders voluntarily reduce the use of trailer buoys and remove gear from Monterey Bay and to establish a "best practices guide" on setting crab traps to reduce entanglements.

In a 2017 press release, the Center for Biological Diversity stated that the recommendations weren't enough to reduce entanglements. Initially a working group participant, the organization left it and sued Fish and Wildlife for failing to prevent commercial Dungeness crab gear from entangling, injuring, and killing humpback whales, blue whales, and sea turtles, thus violating the Endangered Species Act, according to court documents.

In 2018, the parties settled the lawsuit, detailing an approach to reduce entanglement, ensure stakeholder input from the Dungeness Crab Fishing Gear Working Group, and create a formal commitment from Fish and Wildlife to pursue a federal permit for protecting endangered species.

Fish and Wildlife was already committed to doing those things, said Ryan Bartling, a senior environmental scientist with the agency. The settlement, he said, provides that assurance.

Part of the approach to reducing entanglement is the Risk Assessment Mitigation Program (RAMP), which looks at data and analyzes where the risk of entanglement is elevated, and that information is used to manage the fisheries, Bartling said.

"The Risk Assessment Mitigation Program is kind of the underlying regulatory framework that we need to apply for an internal permit for the commercial fishery. That basically allows a fishery to 'take' whales or sea turtles that would otherwise be a protected species," he said.

Senate Bill 1309 was also passed in 2018, and the legislation gave the Fish and Wildlife director interim authority to make in-season changes based on risk assessment data. Those changes include the ability to close fishing areas, restrict gear density, and require specialized equipment, if necessary.

"The goal is to minimize risk, and the RAMP program itself is to take a balanced approach at trying to maintain a viable prosperous fishery, but our charges are to protect endangered whales and turtles under federal law as listed in the Endangered Species Act," Bartling said.

It's important that the public understand, Bartling said, the RAMP program isn't set up to be an adversarial process and regulation.

"It's meant to be a collaborative effort. Ultimately the director has the authority, but we really are going to depend on the fleet to implement it and make it work," he said.

Fisherman Blue said he and his peers are a little jaded about the new regulations and delayed seasons because, "the fisheries of the West Coast of the United States are the most regulated fisheries anywhere in the world."

He said he does understand the need to protect endangered species. However, Blue said he's worried about the Dungeness crab industry and its future as the RAMP protocol continues to impact the season. RAMP regulations went into effect on Nov. 1, 2020.

According to NOAA, the blue whale population hasn't changed much since the early 1990s. A recent 2019 report states that density dependence—and not vessel strike impacts—explains the observed lack of population size increase. Blue said he and other industry members feel that if the fisheries aren't having a significant impact on the whale population, the new regulations shouldn't be as strict as they are.

"If you poison your backyard, there's going to be nothing there for you to make a living with," he said, "so it's not in our best interest to mistreat the environment that we work in." Δ