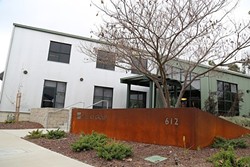 At its Sept. 26 meeting, the SLO County Board of Supervisors unanimously approved a contract worth up to $658,429 for engineering consultant services for a construction project on Avila Beach Drive at the Highway 101 interchange. The approval came after the board heard concerns from some community members over the pending charges against John Lee Wallace, the company's founder, in connection with his past work for two SLO County special districts.

"I think we have plenty of other consultants," said SLO County resident Lindy Owen. "I wish you would take Wallace and put him at the bottom of the list ... some of the behavior has been pretty questionable."

In January, Wallace was charged with two felony and two misdemeanor counts for allegedly breaking conflict of interest laws in connection with his tenure as the administrator for the South SLO County Sanitation District. Wallace allegedly used his position to make, participate in, and influence governmental decisions in which he had a financial interest, according to the SLO County District Attorney's Office.

The DA's office filed additional felony and misdemeanor charges against Wallace in June in connection with Wallace's time as general manager of the Avila Beach Community Services District (CSD). Those charges allege that, between 1995 and 2013, Wallace used his official position with the CSD to encourage its board of directors to approve a contract with another company he owned at the time, Fluid Resource Management (FRM).

Wallace has pleaded not guilty to all the charges against him, and his cases remain ongoing in SLO Superior Court.

Shortly after the newer charges were filed, SLO County 4th District Supervisor Lynn Compton referenced Wallace's legal troubles when she voted against giving the company a county contract for on-call consulting services in May. That contract still passed on a 3-1 vote. Compton voted in favor of the interchange contract at the Sept. 26 meeting.

Speaking to the supervisors prior to Sept. 26 vote, Wallace Group CEO Brad Brechwald indicated that Wallace himself had taken a back seat at the company, stating that he sold off his shares in the firm and had transitioned from its manager and owner to one of its employees.

"John will have his day in court," Brechwald told the supervisors. "Wallace Group is a very strong and healthy company, as we have been for 30 years."

Brechwald said that Wallace Group was now a "fully employee-owned company." According to the Wallace Group website, John Wallace is currently listed as a consulting engineer for the company.

"He is a consulting engineer available to work on special projects on an as-needed basis," Chris Gardner, a business development and marketing manager for the company, wrote in an email response to questions from New Times.

Wallace is due to appear in court on Oct. 3 for a hearing, according to court records.