It’s been the focus of increased scrutiny for its role in a 2010 sewage spill at the Oceano treatment plant, but as of November, the Wallace Group will no longer be the Oceano Community Services District’s engineer.

On Oct. 15—the same day New Times interviewed John Wallace for an Oct. 18 cover story—Wallace sent a letter to the Oceano Community Services District Board of Directors announcing his resignation. 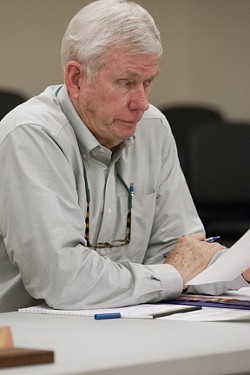 “We truly appreciate the opportunity that you have given the Wallace Group over the past five years to act as District Engineer for the District’s day to day engineering needs as well as provide consulting engineering and permitting services for various capital projects,” Wallace wrote.

He noted that the primary engineer assigned to those duties in Oceano recently left his firm to “pursue a new career opportunity.”

“We take our responsibility to the District very seriously and to that end we have temporarily assigned another engineer, Steve Tanaka, to assist me in handling day to day engineering needs of the District,” he added. “Given my very active role within our organization and Steve’s existing workload, it will be increasingly more difficult for us to personally provide the time needed to provide the high level of service that the District deserves.”

Oceano CSD President Matthew Guerrero confirmed Wallace’s resignation to New Times on Oct. 30. The next district board of directors meeting isn’t scheduled until Nov. 14, and it wasn’t immediately clear how the resignation would affect district operations, nor what the district’s next step would be.

Wallace did, however, offer his services in assisting in the district’s transition while the board and the general manager secure a replacement district engineer.

Though Wallace said his company must “regrettably resign” from the position as district engineer, some people familiar with the situation told New Times on condition of anonymity that the timing of the move was beyond coincidental, considering recent questions over the 2010 spill and allegations of conflicts of interest.

In early October, water quality officials levied a $1.1 million fine against the South County sanitation district for “negligent behavior” and a lack of proper maintenance leading up to the raw sewage spill at the Oceano treatment plant in 2010.

And in 2011, the San Luis Obispo County grand jury took Wallace to task for a perceived conflict of interest regarding his dual roles as head of his firm and district administrator for the South SLO County Sanitation District, which collects and treats sewage from residences and businesses in Arroyo Grande, Grover Beach, and Oceano. The Wallace Group provides most of the district’s engineering services.

Wallace couldn’t be reached for comment as of press time.

“I have very much enjoyed our tenure with the district since 2007 and commend the leadership the Board and your management have shown in leading the district to achieve new goals, with well-deserved recognition from the community and the county,” Wallace wrote to the Oceano CSD.