"I'm glad the matter is finally resolved," Wallace said in a written response to questions from New Times. 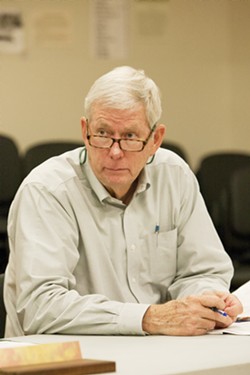 The SLO County District Attorney's office announced the plea deal March 6. Under its conditions, Wallace will pay $59,724 in restitution. The money includes $18,097 to the sanitation district and $41,626 to the Avila Beach Community Services District, where he once served as general manager.

In 2017, the SLO County District Attorney's Office brought felony charges against Wallace in connection with his work at both the sanitation district and the Avila Beach CSD, accusing him of having a conflict of interest because, as general manager and administrator, he permitted the Wallace Group to provide engineering services for them.

Both before and after the charges, Wallace maintained that the contracts for those services were reviewed and approved by legal counsel and the governing boards of the districts.

"The investigation did not reveal any misappropriation of funds on the part of Mr. Wallace or Wallace group," a statement from the SLO County DA's Office said.

The allegations that those charges were based on dated back to 2011 and 1995, raising questions about the statute of limitations from Santa Barbara County Judge Timothy Saffell, who took on the case after it was moved out of SLO County.

At a March 5 preliminary hearing, Staffel raised doubts about whether the statute of limitations would allow the DA's Office to prosecute Wallace for conduct prior to 2013. The next day, the DA's Office announced the plea deal.

"I'm sure that the judge's comments and the way the case played out had a substantial role," Kenneth White, Wallace's attorney, said. "The judge saw that this wasn't something nefarious."

"This prosecution illustrates the very technical nature of California's conflict-of-interest law and serves to place special districts statewide on notice that this business model poses an inherent conflict of interest and puts ratepayers' money at risk," Dow said. Δ