John Wallace, who played a dual role--administrator of the South County Sanitation District and president of its contracted engineering firm--announced on Feb. 20 his retirement from his part-time employment with the district. 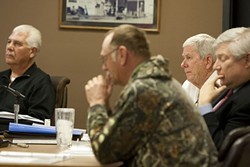 He served with the district for nearly 28 years.

Following a brief opening by board member and Arroyo Grande Mayor Tony Ferrara, Wallace took the floor and announced his resignation as administrator. In a warm speech, Wallace thanked the district staff and former board members in attendance for years of hard work and support. He named specific accomplishments he was proud of during his tenure: the 1986 expansion of the wastewater plant, its 1990 increase to its current capacity of five million gallons a day, and other improvements to the facility.

The room was filled with supporters.

“I sat on this board for five years, and I’ve never seen this many people at a meeting,” said Grover Beach councilman and former board member Bill Nicolls. “I think that’s a testament to you, John.”

The board met later in the evening in closed session to discuss whether to retain the services of the Wallace Group. The board noted that no reportable action was taken on that issue, but announced it had approved a contract with treatment plant operator Paul Karp to take over Wallace’s district job on an interim basis.

Wallace’s tenure with the district has met its share of controversy in recent years, specifically following a 2011 county grand jury report that found Wallace had a conflict of interest due to his roles as district administrator and president of the firm that provided its engineering services. The district challenged the report, but altered his contract to avoid the perceived conflict anyway.

In October 2012, the district was fined $1.1 million over a 2010 raw sewage spill; the Regional Water Quality Control Board cited “negligent behavior” and lack of proper maintenance at the treatment plant as the root cause.