Set three weeks after the events of Avengers: Endgame (2019), WandaVision stars Elizabeth Olsen as Wanda Maximoff, aka Scarlet Witch, an Avenger who can harness chaos magic to alter her reality. After losing Vision (Paul Bettany), Wanda creates a nostalgic life in Westview, New Jersey, where she uses mind control to make the townspeople into characters in her sitcom-like life where Vision is alive and well and the couple has two young boys. (nine 30 min. episodes) 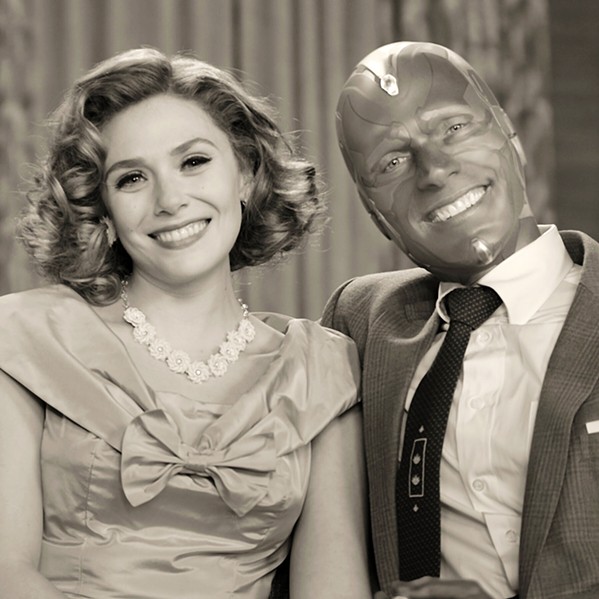 Glen When we tried to watch the first episode, "Filmed Before a Live Studio Audience," I couldn't get into it. Filmed in black and white like a cheesy 1950s sitcom—think The Dick Van Dyke Show—it wasn't what I expected so I turned it off. When the fourth episode, "We Interrupt This Program," came out and everyone we knew was talking about it, we decided to give it another try. Each episode is an homage to a TV era, first the 1950s, then the '60s, then the '70s. It's actually very clever, and the costumes, sets, and humor mirror those TV time periods. Finally in the fourth episode, agents of SWORD come into the picture and we realize Wanda has the town engulfed in some sort of impenetrable force field that's surrounded by the military and SWORD, who are trying to figure out what's going on in there. Once I got into it, I really found the series engrossing and surprisingly deep. It's all about Wanda processing her grief over Vision's death, but her version of Vision doesn't realize he's something conjured in Wanda's head. With its mix of humor and some really dark themes, it's a complex exploration of loss as well as a journey for Wanda as she tries to figure out if she is, for lack of a better phrase, a good witch or a bad witch.

Anna I too had a tough time with the first episode and couldn't get into this until I knew there was a light at the end of the cheesy sitcom laugh-track tunnel. Once I knew we weren't permanently stuck in the '50s, I actually really liked the homage this show paid to sitcoms through the decades. Those first episodes certainly could have been condensed, especially since this is a weekly release; you couldn't just power through the first few to get to the good meat. All that said, I'm here for it now—this has become a rockin' and rollin' ride with Wanda and Vision through the neat little world she's built and the colossal lengths she will go to in order to keep her storyline running. The townspeople aren't just figments of her imagination though, and when they glitch out into some form of self-awareness, Wanda's manicured world starts to crumble. Neighborhood busybody Agnes (Kathryn Hahn) is a gem, ditzy and wonky and altogether such a silly character built just right for a sitcom, but soon it becomes clear that the neighbors have something to hide and it doesn't go unnoticed by Vision. Wanda's pregnancy and their two boys age almost instantaneously, just another zany piece of the puzzle we start to put together by the middle of the first season. This is a fun one, so don't let the first few episodes deter you.

Glen Once the outside world starts seeping through the cracks, things get more interesting. Director Tyler Hayward (Josh Stamberg), who's running the operation trying to penetrate Wanda's force field, wants to attack the town, which FBI Agent Jimmy Woo (Randall Park) thinks is a terrible idea, as does SWORD operative Darcy Lewis (Kat Dennings, who's hilarious!). Meanwhile, Wanda's losing it. Various parts of her world keep morphing between time periods, and she seems to be having a mental breakdown as she realizes how she's manipulating the townspeople against their will. The acting is great and production values are high, and the season finale tees up another season in an after-the-credits scene. I think we can expect more of WandaVision, which sounds good to me! It's unlike anything we've seen from the Marvel Cinematic Universe, and it demonstrates the rich possibilities to come.

Anna Kat Dennings is so great as the tech wizard who figures out the reality sitting between Wanda's Westview and the encampment that ultimately ends up just outside of her sphere trying to penetrate the madness Wanda has formed. I don't want to give too much away, but I will say this show just gets more and more delicious with every episode. I'm not very versed in the Marvel Universe, so I came at this one as a bit of a novice. Honestly, I don't even remember Vision dying or how the Scarlet Witch is incorporated into the series from Endgame, but I was able to sink my teeth into this series after the initial hesitation. Thankfully you don't need a whole lot of knowledge about Marvel or these characters' backstories to enjoy WandaVision. Olsen is frankly pretty great in whatever she does, including this chance for her to take the lead that she seizes in earnest. Along with Bettany and backed up by Hahn and Dennings, this show has some all-stars in its corner. It's totally worth a watch if you're hooked up to Disney Plus. Δ