Pretty mama come and take me by the hand!

The band had formed back in 1970, became favorites of the Hells Angels, and had hits with songs like “Listen to the Music,” “Jesus Is Just Alright,” “Long Train Runnin’,” and “China Grove.” It was really the album Vices and the song “Black Water,” however, that cemented the band’s reputation.

Of course, just when everything was going great, things fell apart, but then in 1976, Michael McDonald stepped in and they delivered Takin’ It to the Streets, a softer, more Blue Eyed Soul sound that featured tracks such as its title track and “It Keeps You Runnin’.” In 1977 came Livin’ on the Fault Line, another album dominated by McDonald’s influence. The band marched on until 1982, when they disbanded until a 1987 reunion, and they’ve been together ever since.

Their current single, “A Brighter Day,” is climbing the Adult Contemporary Chart, and they played the Grand Ole Opry not long ago to film a Crossroads special with Luke Bryan. Bryan and the Doobies’ performance of “China Grove” was in heavy rotation on the CMT channel. All tolled, they’ve sold 40 million albums over their still active career.

On Sunday, May 27, the Doobie Brothers headline the 19th Annual Avila Beach Blues Festival, which starts at 2 p.m. with Taj Mahal, who’s followed by Tower of Power and then the Doobies.

Advance reserved and general admission tickets are on sale now at all VALLITIX locations. Charge by phone at 1-888-825-5484. Order online at vallitix.com. All ages.
Rain or shine.

Before this humdinger of a show, Avila Beach Resort has two other events cooked up for you.

On Friday, May 25, check out the third annual Avila Beach Party with The Cataracs, Shwayze, Outasight, Starting Six, and DJ Hi-Tem. Tickets for this one are also available at VALLITIX.

On Saturday, May 26, it’s tequila time! Arriba! This marks the inaugural Avila Beach Tequila Festival, scheduled from noon to 4 p.m.  They’re hoping for a crowd of about 3,000 people, and with Ozomatli providing the entertainment, they might just make it. Central Coast Mariachi will also hit the stage, as will others throughout the day. In addition to tequila, there’ll be various food and wine to choose from. Tickets are $45 at VALLITIX and include 10 tequila tastings, a commemorative glass, and party shades! This one’s 21-and-older, kids.

Dance your ass off on Friday, drink your fill of tequila on Saturday, and go bluesy on Sunday. On Monday you can rest. 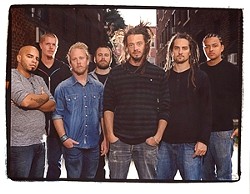 SOJA keeps getting bigger and better. Yet surprisingly, the socially conscious reggae band thinks of themselves as folk singers.

“To me, Rage Against the Machine, Wu -Tang Clan, Sade, Johnny Cash, Bob Marley—they’re all folk artists,” lead singer-guitarist Jacob Hemphill said in press materials. “There’s no difference between Raekwon saying, ‘I grew up on the crime side, the New York Times side, where staying alive was no jive,’ to Bob Marley saying, ‘Cold ground was my bed last night and rock was my pillow, too,’ to Johnny Cash saying, ‘I know I had it coming, I know I can’t be free, but those people keep on moving (around) and that’s what tortures me.’ Folk is all about storytelling and passing on a legacy. It’s timeless, it’s limitless, and it crosses all boundaries. That’s what this band is striving for. It’s a tall order, but we’re making our way.”

Touring in support of their newest album, Strength To Survive, they play Pozo Saloon on Sunday, May 27, with Bone Thugs & Harmony and J Boog (noon; all ages; $25 at pozosaloon.com).

Hemphill said the album was inspired by Marley’s Survival: “That’s the greatest reggae album ever made. It has the best basslines and the best lyrics ever heard on one record. Marley wrote it after he went to Africa. I was 13 or 14 when I listened to it for the first time, and it triggered all these long-forgotten memories of when I lived in Africa as a kid. My dad was an IMF res rep in Liberia in the late ’80s. I remember when the coup first started—my family had to hide in these iron bathtubs for three days because the military was shooting at everything. I was 7, and that was one of my first memories. We made it out on the last flight. So Africa was always a big part of our lives—it defined our family, in a way. Music came right after that, so, for me, music was always tied to Africa and music was always something powerful.”

Check out Strength to Survive and its impassioned call for unity and change: “I could go on and on about the horrible damage we’ve done to the Earth or the problems that arise when countries compete for money over an imaginary border, but the album has one central theme,” Hemphill said, “and that’s our hope for the world to be one family.” 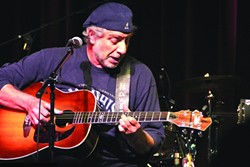 Don’t be singing the blues because you waited to get tickets for Blues Hall of Fame member Michael “Hawkeye” Herman, who plays on Sunday, June 3, at 4 p.m. at the SLO Botanical Garden. I’m telling you about this one a week in advance because their last four SLOBO shows sold out quick!

This blues guitar master cut his teeth in Chicago more than four decades ago, eventually moving to the Bay Area in the late-’60s, where his Windy City style mashed up with West Coast Blues. A deadpan raconteur and compendium of blues knowledge, this droll showman will have you entertained to be sure. After his first acoustic set, he’ll bring out three friends—Tom Corbett, Phil Salazar, and Sarah Jane Nelson—who’ll sit in on some songs.

Tickets are $15 for members and $20 for non-members; and $25 at the door if there are any tickets left (doubtful!). Visit slobg.org or buy tickets at Eve’s Garden Shop at the Botanical Garden, daily 9 a.m. to 5 p.m. Concert guests can also join a free docent-led tour of the garden at 2:30 pm. The concert also features a no-host bar.

Swap! Zine, the little culture zine that could, has joined forces with Tang N Bang, the rootin’ tootin’ concert series, to produce a CD compilation of awesome local acts and two shows to promote it. Titled The Cause & The Cure, and featuring a bottle of beer on the cover (natch!), the new CD has songs by local bands performing at the shows.

SLO Brew will kick off your week on Thursday, May 24, island-style with Mishka & Anuhea during their “The Love & Roots Tour” (8 p.m.; all ages; $10 presale or $12 at the door), with Micah Brown opening. Hawaiian pop star Anuhea’s new album For Love has two songs selling well on iTunes: “Simple Love Song” and “Higher Than The Clouds.” She’s a major presence on the Islands with multiple hit songs being played in heavy rotation, and her work is compared favorably to fellow islanders Jack Johnson and Bruno Mars. She also enjoys the distinction of being specifically requested to perform by his Highness, the Dalai Lama.

On Friday, May 25, give a SLO Town send off to the Modern Music Academy, which for nine years has educated a talented crop of local musicians. This 7 p.m., all-ages show is the school’s final showcase. Tickets are $7 and the public is welcome.

Then on Saturday, May 26, alt-rockers PK will play an album release show to celebrate their new EP, Lost Boys Sessions (7 p.m.; all ages; $9 presale or $12 at the door).

Steve Key’s Songwriters at Play showcases kick off at The Porch on Thursday, May 24, with San Diego folk-pop duo The Lovebirds (Lindsay White and Veronica May), whose debut album Nutsy Pants features songs about love, though the couple’s own lives haven’t always been so sweet, with a host of obstacles throughout their musical and romantic partnership (6:30 p.m.; all ages; pass the hat).

On Sunday, May 27, enjoy a double feature when two headliners—Cyndi Harvell and Melissa Phillips—share the bill at Sculpterra (1 p.m.; all ages; pass the hat). The Bay Area chanteuses will treat us to their heartfelt ballads.

Then on Tuesday, May 29, head to Kreuzberg to see Justin Farren (6:30 p.m.; all ages; pass the hat). The Sacramento-based performer has been called “the storyteller with an impeccable voice, a guitar, and a head full of funny, tender, and engaging observation.” Paul Simon and Jack Johnson are a couple of the songwriters to whom he’s been compared.

As always, each showcase features a handful of other performers doing four-song sets.

Shaufrau is bringing its soulful rock to Last Stage West on Thursday, May 24, a little warm-up gig before they head to Hollyweird and play The Viper Room the next Tuesday. Check ’em out!

The Cal Poly Brass Choirs, featuring many of the university’s top brass players, will perform at 3 p.m. Saturday, May 26, at the San Luis Obispo United Methodist Church. Titled “All That Brass!” the concert will include classical and jazz selections by composers including J. S. Bach and Johannes Brahms. The concert is free and open to the public.

On Saturday, May 26, head to Santa Margarita for a Lawn Picnic & House Concert with the North Pacific String Band, Heartbreak Hill, and Ranchers for Peace at the Inglish family residence ($25; call 748-2998 for details and directions; BYO chairs and picnic; the lawn opens at 5:30 and the show starts at 6 p.m.). North Pacific String Band plays new, and sometimes bluegrass music from the West Coast. Heartbreak Hill is Erin Inglish on banjo and vocals and Jody Mulgrew on guitar and vocals.

Ranchers For Peace is Charles and Ray Duncan, a SLO County father-daughter duo “doing what we can to make giving a damn cool again.”

The Cal Poly Choirs and Cal Poly Symphony will perform music by two of England’s greatest composers—George Frederick Handel and Ralph Vaughan Williams—at 8 p.m. Saturday, May 26, in Harman Hall of the Performing Arts Center’s Christopher Cohan Center. Tickets cost $13 and $15 for general admission, $12 and $14 for seniors, and $8 for students (call 756-2787).

Arroyo Grande’s 29th Annual Strawberry Festival features 40 great performers on 11 stages, plus four carnival areas, camel rides, and plenty of vendors Saturday and Sunday, May 26 and 27, in the historic Arroyo Grande Village. You can hear everyone from the Shival Experience, the Crisptones, SoulSauce, and Mojo Combo to Solomon Creek, Crustacea Jazz Band, Cal Poly Jazz Bands, and Bubba Ramey. Visit arroyograndevillage.org/strawberry_fest.shtml for a complete schedule of performers. 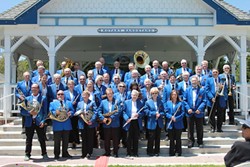 Two classics are coming together on Sunday, May 27, when the 138-year-old SLO County Band plays the historic King David’s Masonic Lodge at 2 p.m. (a $10 donation is requested). The SLO County Trumpet Alliance will perform a 1 p.m. welcoming set. Special historical displays and tours will also be featured. “The San Luis Obispo County Band, under the direction of Leonard Lutz, performs over 20 concerts a year throughout the area,” according to promoter Curtis Reinhardt. “The Band traces its origins back to the SLO Military Band, founded in 1874, perhaps a local outgrowth of the popularity of brass bands created during the Civil War. During its 138 years, the Band was affiliated with the Elks Club early in the 1920s, with the American Legion in the 1930s, and in the 1940s and ’50s donned military khaki as the Veterans of Foreign Wars Band.”