I loved model planes as a kid, lovingly building and painting them, then filling them with firecrackers and blowing them up. Ah, the sweet scent of burning plastic and model glue. I sort of wish I had a few of those models left, but alas, they’re nothing more than puddles of melted plastic in the recesses of my memory. 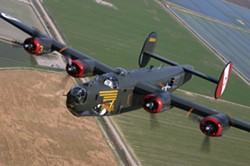 Later this week, however, I’m going to pony up $12 ($6 for children; World War II vets are free) and head to the SLO County Regional Airport to look at the very planes upon which the models of my youth were based: a Boeing B-17, a Consolidated B-24, and the race car in the sky, the North American P-51 Mustang! Woo rah!

According to Hunter Chaney, director of marketing for the Collins Foundation, which maintains these pieces of living history, “The tour itself is quite an unusual experience. These planes—have you seen them before?—they’re restored to World War II condition. It’s like walking into a time machine.”

The planes—Nine O Nine (the B-17), Witchcraft (the B-24), and Betty Jane (the P-51)—look like they just rolled off the assembly lines. They’re precisely like they were in the early ’40s. Mint condition!

“What we strive to do as an education foundation is ask ourselves, ‘How do we engage people in World War II history? How do we motivate people to want to learn more, especially the younger generation?’ We believe that touring through these aircraft is the most effective means to do this. It’s something people can’t get in a classroom setting. People will be talking to vets, interacting with true living history, and that makes an impression on people.

“World War II was the worst human conflict since we’ve been on this planet, and it wasn’t that long ago,” Chaney continued. “It’s important for people to remember we dropped nuclear bombs on Japan, the terrible Holocaust, what it means to lose freedom. This is what Americans fought and died for, and it was a mere 70 years ago.”

The Collins Foundation has been maintaining and touring with these planes for the last 20 years, visiting 110 to 120 cities a year, and it’s not cheap to keep this program going. The planes cost $4,000 an hour to fly, and the program is fully maintained by ticket sales and flights.

“When folks year after year pay to tour through and fly in these aircraft, each individual keeps the program going, so as long as people come out and participate, we’ll keep ’em flying,” Chaney said. “We’re supported solely by individual participants—no tax dollars. The majority of the crew are all volunteers. These three planes are probably the most loved and well cared for aircraft in the world.”

Which brings us to the rich folks part. For $425 per person, you can take a half-hour flight in the B-17 or B-24; and for $2,200 a half hour or $3,200 for an hour, you can go up in the two-seater P-51 and actually get some “stick time” in the dual control trainer. Don’t expect these flights to be especially comfortable, however.

“This is a true living history event, not an air show,” Chaney added. “People will be interacting with World War II history, and they’ll find these planes were not particularly comfortable. People often get that ‘aha’ moment when they realize what it must have been like for a scared 18-year-old kid flying with a mask and snorkel in awful conditions, what sacrifices they made. All told, 88,000 people lost their lives in the Army Air Corps. It’s important to remember these young men through these aircrafts.”