Warning shots: A trio of recent lawsuits could signal a litigious future for Phillips 66 and its rail spur project

Contra Costa County is more than 200 miles away from San Luis Obispo County. By and large, the two counties don’t have much in common. Recently, though, three lawsuits filed in Contra Costa County highlighted at least one important similarity.

Namely, oil giant Phillips 66 operates a refinery in each county, and a proprietary pipeline links the two. Phillips 66’s Rodeo Refinery was hit with the three suits (as was Contra Costa County) between March 4 and 5, and that legal action has a direct connection to SLO County and the Santa Maria Refinery in Nipomo.

“Folks who are watching the Santa Maria Refinery and its rail spur extension project should also keep a close eye on Rodeo,” said Roger Lin, an attorney representing environmental group Communities for a Better Environment (CBE) in one of the three suits. “We’ve always held the position that the two refineries are really just one whole.” 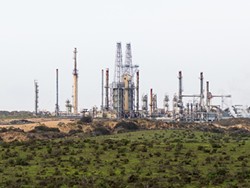 In an oversimplified sense, Lin’s opinion is the nexus of the trio of lawsuits. Phillips 66 insists that a “propane recovery project” at the Rodeo Refinery and the rail spur project at the Santa Maria Refinery are discrete entities, and their opponents insist that the two projects are inextricable.

The Rodeo propane recovery project is significantly further along in the review process, as the Contra Costa County Planning Commission approved the project in November 2013, and the county’s Board of Supervisors upheld that decision on Feb. 3, 2015. The trio of lawsuits challenges the legality of that Feb. 3 decision.

The main thrust of the lawsuits—filed by CBE, the Rodeo Citizens Association, and the labor association Safe Fuel and Energy Resources California (SAFER)—is the allegation that Contra Costa County and Phillips 66 violated the California Environmental Quality Act (CEQA) by approving the propane project while ignoring what the plaintiffs claim is an ironclad connection to SLO County’s crude-by-rail project and its associated environmental impacts.

“The County improperly ‘piecemealed’ its review of the [propane recovery] project from other related projects … designed to accommodate the switch from California crudes to out-of-state imports,” argues the SAFER suit. “A project of this magnitude and with these unique challenges requires careful description, assessment, and mitigation of impacts. Unfortunately, that did not occur.”

New Times spoke with attorneys for the plaintiffs in all three suits, and they all said they wouldn’t be surprised if the court ultimately decides to consolidate the three lawsuits. All of the attorneys also said their clients are serious and believe strongly in the necessity of this litigation.

“People in SLO County, just like those in Contra Costa County, have the right to have all these impacts evaluated in one place,” said Marc Joseph, an attorney representing SAFER California. “It’s truly baffling that the powers that be refuse to analyze this project as a whole.”

“We’ve been saying all along that the fastest way to a conclusion is for Phillips 66 to just admit that these two projects are linked,” Lin said. “If Phillips 66 wants to shortcut this legal process and just tell the truth, we welcome that.”

For better or for worse, it doesn’t appear Lin’s wish will come true any time soon.

“Continued allegations by Communities for a Better Environment and others that this is a crude-by-rail project are inaccurate and misleading,” he concluded.

Technically speaking, the propane recovery project—as proposed—will simply modify and augment existing infrastructure at the Rodeo Refinery to enable recovery of a greater amount of propane and butane, which has nothing to do with transporting oil by rail.

However, the lawsuits cite two scientific analyses that both independently conclude that—as the CBE suit puts it—“without a switch to a lower quality oil feedstock, the Rodeo facility alone lacks the ability to recover sufficient propane or butane to meet the project’s stated objective.”

Since the Rodeo Refinery primarily receives its feedstock from the Santa Maria Refinery—which is itself aiming to completely reinvent its oil sourcing with the crude-by-rail project—the suits argue that potential oil sourcing changes in SLO County should have been evaluated as part of the environmental review process for the Rodeo project.

“The people whom I represent will be affected by the Rodeo project on a daily basis, and it has real impacts that were not addressed,” said Ellison Folk, an attorney representing the Rodeo Citizens Association. “Situations like this are precisely why we have laws like CEQA.”

Though the Contra Costa County lawsuits are only in their infancy, they’re already on the radar of SLO County stakeholders because of their potential to impact the Santa Maria Refinery’s rail spur project.

“It’s really positive to see legal challenges to Phillips 66 like these suits,” said Laurance Shinderman, a steering committee member for the local Mesa Refinery Watch Group, which opposes the rail spur project. “We feel like Phillips has been less than forthcoming with their proposals, and we’re very encouraged to see we’re not alone in that assessment.”

From a regulatory perspective, Deputy SLO County Counsel Whitney McDonald is more of an impartial observer, and she’s also been evaluating the legal elements of Phillips 66’s SLO County proposal.

“If there was a final [Contra Costa County] decision that sided with the petitioners, then that could definitely change what Phillips 66 is doing down here,” McDonald told New Times. “Until a final legal judgment is attained, though, we’re assuming everything will stay  the same.

“My guess is the same legal issues and lawsuits will come into play when SLO County makes a decision on our oil project, so we’re watching these lawsuits closely,” she added.

As for how Phillips 66—the prime mover of this entire situation—thinks legal action in Contra Costa County could affect its SLO County proposal, it’s anyone’s guess.

In response to that exact question, Nuss simply answered, “We remain committed to the proposed Santa Maria rail project.”