Was a pat on the back a slap in the face?

Some saw it as just a pat on the back, but Vern Dahl felt it was more sinister. For him, it was the pat that broke the camel’s back.

Dahl is a six-year veteran on the Oceano Community Service District board of directors who just began a new four-year term. 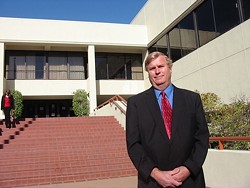 Following the Nov. 12 board meeting, Dahl claimed Lin Hill, the 57-year-old wife of board vice president Jim Hill, verbally threatened him and slapped his back. He felt it was so severe that two days later he filed for a restraining order with the SLO County Superior Court. He asked that Lin not be able to come within 300 yards of him and be banned from attending future board meetings, or at the very least that she only be allowed to stay while meetings are in session and leave immediately afterward. It wasn’t just a pat, Dahl said, but the culmination of years of harassment.

His argument didn’t make much headway in court. Judge Charles Crandall denied the restraining order after about an hour on Dec. 12. Only two people testified—both on behalf of Dahl. But both testimonies came from people who were not at the meeting. They tried to show that Dahl had been harassed by the Hills and others for the past four years. Crandall dismissed both testimonies as irrelevant.

Most testimony came from written declarations, and some witnesses just seemed embarrassed by the long history of infighting in the district.

“It was somewhat of a ‘yes you did/no I didn’t’ type argument that you would expect children to engage in,” said Alexander Simas, the district’s legal counsel.

All of the witnesses said they only saw a pat on the back, but heard Dahl and the Hills quietly bickering. According to several declarations, Lin approached Dahl following a heated board meeting, said something to him, and touched him on the shoulder. Dahl then said loudly, “Please don’t touch me,” and Lin left the room.

None of the statements described the exchange as violent.

Still, Dahl said his shoulder stung for about 30 minutes and he worried it could have further injured his already fragile neck, although he said he hadn’t sought any medical treatment.

When questioned by Lin’s attorney, Jeffrey Minnery, whether he feared for his safety, Dahl was unclear but said, “I don’t know at what point she’s going to break or what she’s going to do.”

Despite differences of opinion regarding whether Dahl was actually in physical danger, both sides seemed to agree that the fight between Dahl and the Hills has deep roots.

Dahl denied the court battle was political or inadvertently directed at Jim. He did believe, however, that he was the object of political muscling and threats.

“It’s just a tactic that’s been used to get their way, and this time it was just taken to a physical level.”

Both of the Hills thought Dahl was trying to settle a political agenda, going through Lin to get at Jim.

“I believe Mr. Dahl’s claim is intended to harass me and my wife and is politically and personally motivated to put me in a position where I feel I must resign from the OCSD Board,” Jim said in his declaration.

Even Crandall believed the fight had escalated into an unnecessary civil case. After dismissing the case, Crandall scolded both sides, and effectively the district board as a whole.

“There’s something going on … and the behavior of confrontation in politics is lousy and needs to be stopped,” he said.

Even with the restraining order dropped, the court hearing seems to have only flamed the fires on the board. Recently elected board member Mary Lucey said the court proceedings were strictly a personal issue. But she also criticized past members for creating a contentious board and described events that led to Dahl and the Hills’ contentious relationship.

“As far as I’m concerned I’m happy to have this behind me,” he said. But, he added, “If they want to keep up the attacks, I’m going to have to keep defending myself.”

Lin was hesitant to speak and was noticeably shaken by the day in court. She said she didn’t think the situation would change. Her husband, however, was slightly more optimistic and said he believed the board would “overcome this.”