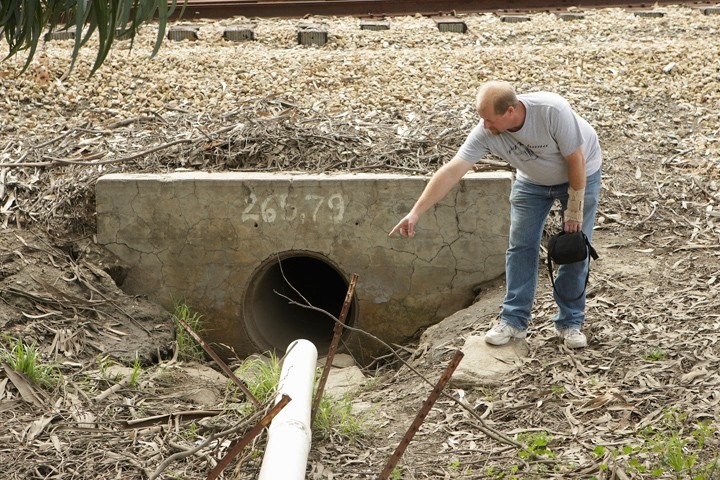 Bill Bookout is a man consumed by the legal battles he’s waged. In May 2006, he sued Caltrans, San Luis Obispo County, Union Pacific Railroad, the Pismo Oceano Vegetable Exchange, and the Oceano Community Services District, all with the perhaps naïve hope that someone would clean out a drainage channel bordering Highway 1 in Oceano and stop the flooding that plagues the area every year where his nursery is located.

Bookout’s obsession with his lawsuit and a compulsory finger-pointing at Caltrans crews, whom he’s photographed and videotaped shoveling debris into a drainage channel, has cost him hundreds of thousands of dollars in legal fees. He shut down his business in early 2008 and laid off 12 employees. Now, 10 years after he opened the Oceano Nursery, he’s probably going to lose it to foreclosure.

On a brisk and windy day, Bookout eagerly clomped through the drainage channel leading to a drainage pipe that clogs every year and floods the highway and surrounding businesses.He grabbed a clump of waist-high weeds in the channel.

“Now no one wants to maintain the channel,”
he said.

Bookout argues that Caltrans is responsible for maintaining the drainage channel, but crews regularly clog it with debris. He argued this in court, but lost, and now has $200,000 in liens on his various businesses, he said. He’s filed an appeal, but that hasn’t gone to court yet.

“The source of the water is coming from outside of state property—the highway—so our position is that a solution to this flooding rests outside our jurisdiction,” said Jim Shivers, Caltrans public information officer.

Bookout has coated the walls of the nursery, both inside and outside, with pictures of the flooding and Caltrans crews, links to his blog and YouTube pages, and government letters. He’s left the fading paint on water-damaged buildings and scattered piles of junk. In essence, he’s created a massive advertisement for his lawsuit and the flood damage.

Bookout kept making monthly payments on his loan until January, he said. With the debt from his lawsuit, Bookout is now in too much financial trouble to refinance or get a new loan. On March 2, his lender notified him he would have to shell out about $400,000, the remainder of his loan, by March 8 or face foreclosure. He didn’t make the payment and fully expects to lose the business.

Over the past year, it’s flooded 13 times, he said, and in the next big storm it will probably flood again until someone takes responsibility for the drainage channel.

Supervisor Katcho Achadjian hopes that the ongoing case will finally identify a responsible party to take care of the flooding.

“My hopes are that whatever comes out of that lawsuit will point the finger to someone,” Achadjian said.

Bookout said he plans to keep fighting all the way to the Supreme Court. And it’s a fight he seems to see as something much more than flooding or drainage channels: “There’s gonna be a lot of things said in the future about me.”