Waste not: Trash habits have changed during the COVID-19 pandemic File Photo By Jayson Mellom WHEN IN DOUBT Face masks can't be recycled, and the ground isn't a trash can.

It was sometime around early November 2020 when Scott Pickford started to notice all the trash building up around downtown San Luis Obispo on his walk to work every morning.

Disposable masks littered the bushes and lawns that lined the route to his office. Paper napkins, receipts, and discarded clothing tags filled the gutters of the streets. Downtown, he found that the city's trashcans were overflowing, and even when they weren't, there were still used coffee cups and beverage bottles sitting atop the cans.

So Pickford decided to pick up the trash himself. He bought a grip picker widget and started carrying it and several trash bags with him on his way to and from work.

"It is shocking to me how much I've gotten every day," Pickford told New Times. "And it's not just the takeout thing."

Since the coronavirus pandemic's start in March 2020, the trash we create and where we dispose of it has changed. With many businesses closed and restaurants limited to takeout, local landfills are taking in less commercial waste while receiving more from residential customers.

A study published in August 2020 by the U.S. National Library of Medicine National Institutes of Health found that waste production has increased across the globe in countries where physical distancing measures and shutdowns have been instituted during the pandemic, particularly among residential and medical facilities. Safety and cleanliness are now priorities, and that's led to an increase in the consumption and production of single-use products, like disposable masks, latex gloves, plastic bags, and sanitary wipes, the study found.

That's somewhat concerning for local waste management experts, who want to ensure that people are mindful of which of these possibly unfamiliar products can be recycled and which belong in the trash. And SLO city staff say they're still working to adapt to the spike in public parks usage and the overflowing trash bins that have come with it.

Still, Pickford isn't convinced that COVID-19 is entirely to blame for all the trash he picks up on his way to work, which adds up to an average of about two full-sized garbage bags a day. His record, though, is 3 1/2 bags one way. The most common offenders, Pickford said, are napkins, receipts, and clothing tags, followed closely by cups, cans, and bottles. He also finds a lot of masks now, including both the disposable and cloth kinds, and takeout boxes left out on tables outside local restaurants, which currently aren't supposed to offer busing services.

"I honestly don't believe it's a COVID thing," Pickford said, "other than all of us, when we're depressed, go for the easy."

But that's one of the biggest challenges with sustainability efforts in times like these, according to Patti Toews, program director at the SLO County Integrated Waste Management Authority. With health and safety taking its rightful place front and center and so many people struggling financially, Toews said it's understandably easy for people, businesses, and government entities to overlook the ways in which their habits impact the environment.

That attitude, she said, combined with changes in the ways we shop and eat have led to increases in waste and recyclables throughout the county.

People are shopping online even more than normal due to physical distancing efforts, and she said that uses up a lot of extra shipping packaging that wouldn't be needed if shopping locally. The same goes for takeout and grocery shopping, where it's not as easy as it once was to bring in reusable containers and bags for your food. 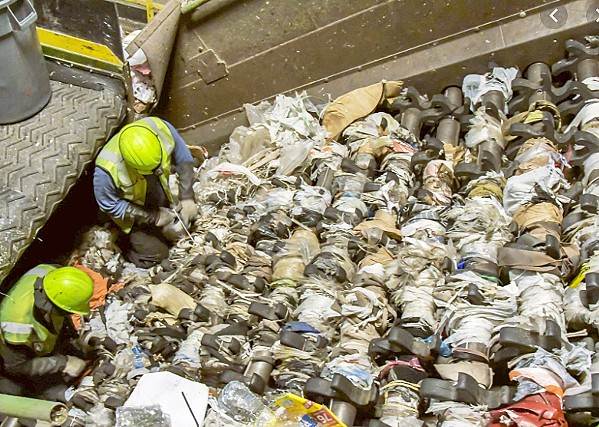 Then there are all the regulations businesses either have to follow or have enacted to reduce coronavirus transmissions. Those practices often include single-use products, sometimes unnecessarily. Bright Life Playschool owner Kimberley Love told New Times in a previous interview that she was required by health regulations to change gloves between each of her 60 students when taking entry temperatures, until she eventually got the go-ahead to use sanitizer between each student. And a SLO County ordinance set to go into effect in April 2020 that would have banned Styrofoam was delayed an entire year due to the pandemic and fears over reusable products.

"But if you have the luxury of, No. 1, having a job, you have a roof over your head, you're doing good, you haven't been affected by COVID," Toews said, "then by all means I expect people to really think, really think, about OK do I really need Amazon to bring three different packages to me? And can I have them combined in one trip to my house?"

Even amid COVID-19, Toews said there are ways to stay semi-sustainable. Although most grocery stores won't let their cashiers fill up reusable bags for customers, some allow customers to bag groceries themselves. If not, Toews said bagging can be done outside or at the car. When ordering takeout food to bring home, ask restaurants to leave out the bag and "extras," like cutlery and napkins.

Figure out what products can and can't be recycled (cheat sheets can be found online at iwma.com). Toews said that when in doubt, people tend to throw trash in their recycling bins assuming someone else will figure it out.

"Unfortunately," she said, "it's doing more harm than good."

When non-recyclables like plastic bags end up at recycling facilities, they get caught up in machinery and take staff time and effort to remove. Styrofoam, bubble wrap, disposable facemasks—none of those are recyclable.

"We're creative," she said. "Because I don't need another Styrofoam container to fill up my garbage can or accidentally get littered."

The city of SLO actually saw a decrease in waste generation through much of the pandemic, according to Solid Waste and Recycling Coordinator Jordan Lane. In March through October 2020, Lane said the city saw a 14.6 percent decrease in gross waste compared to the same time period in 2019. That equates to about 7,500 tons and includes residential, commercial, construction, and demolition trash and recyclables.

While Lane said it's difficult to say what led to that decline, residential and commercial statistics offer a hint.

"Residential garbage generation has increased by 5 percent between the two years, while commercial garbage has dropped by 10 percent," she wrote in an email to New Times. "Both of these numbers can be explained by the current situation—having more people at home and some businesses not currently operating."

Although Lane said there's still work to be done—the city's public trash cans have been especially difficult to keep up with recently—she hopes this downward trend in trash creation, at least in the city of SLO, continues through the pandemic and even after. Δ