The proposed Phillips 66 oil rail spur project continues to be a hot topic at government meetings across the Central Coast. That includes Pismo Beach, where members of an activist group opposing the spur gave a presentation to City Council members Sept. 1.

Gary McKible gave a short presentation to councilmembers on behalf of the Mesa Refinery Watch Group. McKible urged the council to oppose the project, which would add a rail terminal and tracks to an existing rail spur at the Santa Maria Refinery in Nipomo, enabling Phillips 66 to transport crude oil there by train. 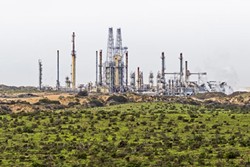 “Our goal tonight is to give this council all the information it needs to say no to this project,” McKible said.

Pismo Councilman Erik Howell, who also sits on the California Coastal Commission, recused himself from the presentation.

McKible’s presentation offered several criticisms that members of the group and others opposed to the project have voiced previously, including the environmental impact on local air quality and the possibility of train derailments and potential explosions. His position included several photos of the aftermath of derailments in Virginia, Alabama, and Canada.

“Pismo beach is not prepared,” he said.

McKible also noted that such disasters would not only endanger lives but had the potential to cripple the city economically.

“Why should the public take all the risk while Phillips [66] reaps the rewards?” he concluded. “Pismo Beach should not have to become collateral damage to satisfy corporate greed.”

The presentation was followed by a lengthy public comment, with about 20 individuals speaking on the rail spur issue. One of those, Marcus Beal, said he was in favor of the project.

“Of course there’s a hazard, there’s always a hazard, but crude oil isn’t the most hazardous thing coming down the rail line,” Beal, a local Phillips 66 employee, said.

He said there were far more hazardous materials than crude oil being transported by train and mentioned propane and butane as examples.

“P 66 isn’t transporting the product,” Beal said. “The concern should be concentrated on the transportation industry, not Phillips 66.”

The council took no action on the matter.

Several local cities are choosing to wait to take an official stance on the project until the second draft of an environmental impact report is released.

While Pismo continues to mull over the rail spur issue, the city of Grover Beach is slated to hold a general discussion on the topic rail safety at its Sept. 21 regular meeting.