For more than 20 years, Central Coast water quality regulators knew that a carcinogenic solvent, trichloroethylene (TCE), had contaminated the groundwater in a rural mixed-use area near the San Luis Obispo County Regional Airport.

After years of inaction, including a 15-year period where the case went cold, on July 31, the Central Coast Regional Water Quality Control Board executed a final cleanup order of the TCE, which poisoned at least 14 wells near Buckley Road. 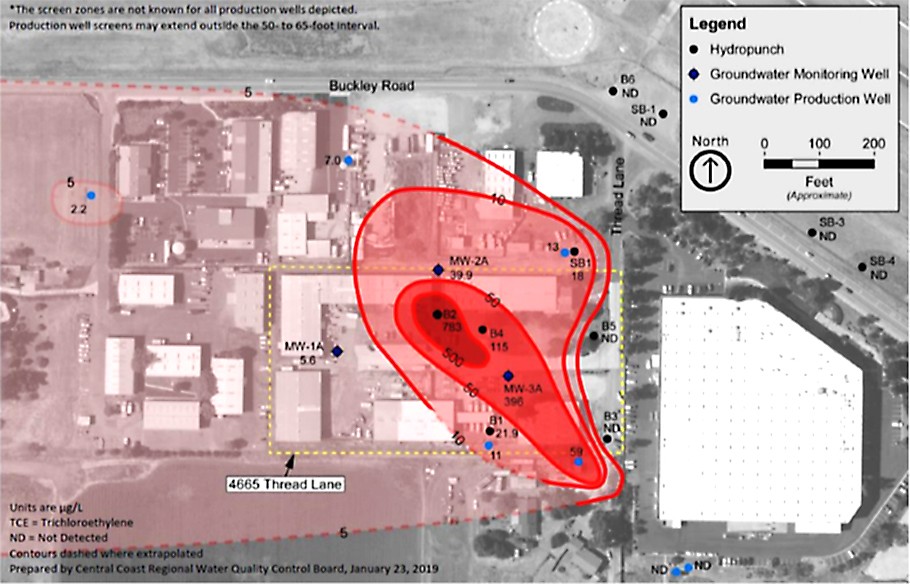 "We are disappointed that nothing was done about it," read a letter submitted by 10 area residents to the agency on June 14. "Members of the community could have reduced their exposure had they known about the problem in the 1990s."

The water board's meandering TCE investigation, which was jump-started in 2013 (not 2015, as New Times previously reported), ultimately found a lead screw manufacturer on Thread Lane—Noll Inc.—responsible for the spill. Groundwater tests under the property last year detected TCE at 783 micrograms per liter (μg/L), about 157 times the federal drinking water standard (5 μg/L).

"Noll Inc. has operated a machine shop on the 4665 Thread Lane property since the 1960s," the cleanup order reads. "Machining operations commonly used solvents as degreasing agents, including TCE."

Per the order, Noll Inc. and several ancillaries are required to provide replacement water to affected residents and businesses and conduct a full TCE cleanup. They must submit plans for those tasks by Sept. 30 and Oct. 18, respectively.

In comments to the water board, a Noll family attorney denied the company's alleged role in the TCE spill. He added that the order would pose a serious financial hardship to the family.

"Board staff is well aware that my client is not a wealthy or profitable company," LA-based David A. Ossentjuk wrote to the agency. "We strongly object to the board's contention that the 4665 Thread Lane property is 'the' source of TCE."

Noll Inc. owner John Noll has denied ever using TCE as part of company operations. He did not return requests for comment from New Times.

In Ossentjuk's comments, he raised several possible alternative culprits in the spill—including an old aircraft hangar used by the U.S. military in the '30s and '40s; an alleged past dumping ground for airport-related waste; a former nearby refrigeration repair shop; and Central Coast Labs, a industrial business whose building burned down in 1981, according to Ossentjuk.

He stated that two former Central Coast Lab employees are expected to provide "sworn testimony relating to the use, storage, and disposal of TCE at the property." Noll Inc. filed a petition to compel their depositions, and it was granted by a court on June 12, according to Ossentjuk.

"We were surprised that the water board did not have anyone present at the hearing and by its lack of willingness to learn new and possibly relevant facts," he wrote.

While soil/water samples at some of the sites mentioned by Ossentjuk did test positive for varying levels of TCE, water board officials say the evidence points to Noll Inc. as the most likely source.

Testing there uncovered "the highest concentrations of TCE in the Buckley Road area to date; effectively indicating a source of TCE," water board officials said.

Noll Inc. may appeal the cleanup order to the State Water Resources Control Board within 30 days. It had not done so as of New Times' press time.

This isn't the first time Noll Inc. and the regional water board have discussed the TCE contamination near Buckley Road.

In 1998, the agency wrote a letter asking Noll to explain how TCE showed up in a neighbor's well at levels 13 times higher than the safe limit.

"The closest apparent source of TCE is Noll's machine shop," the letter reads.

The water board asked Noll to put together a work plan for testing soils and groundwater in the area. Refusal to comply came with potential penalties of $1,000 per day.

In response, John Noll said his company did not use TCE as part of its operation and mentioned the fire at Central Coast Labs. He declined to undergo the testing that the water board had ordered him to do.

"We invite you and your department to take a tour of our facility, and test the chemicals inside of our building, so that we may prove that we are not dumping toxins into the environment," Noll wrote.

For unknown reasons, the water board didn't follow up with the case, and it remained dormant for 15 years. In 2013, after the chemical was found in a public supply well, the agency reopened the investigation.

"It appears that the letter was misfiled, and no follow-up occurred," said Bishop, the water board's current site cleanup manager. "I can't address why no follow-up was conducted at that time, as the staff associated with that letter in 1998 have long since retired."

This explanation falls flat for the Buckley Road residents who have been unknowingly exposed to the carcinogen for years. One resident claimed to have recently contracted a kidney tumor and noted that TCE exposure is scientifically linked with renal cancer.

"The TCE plume is a serious health threat," the June 14 letter from 10 residents stated, "and will remain as such for a long time." Δ