Water in the Wild West

The private sector is tackling development, water use, and retrofitting in Los Osos

The situation in Los Osos took a new turn in March when the SLO County Board of Supervisors confirmed a Level III severity for the unincorporated town's water supply the most critical rating in California for municipal water reserves. On the county Planning Commission's recommendation, the board handed down yet another building moratorium for Los Osos. 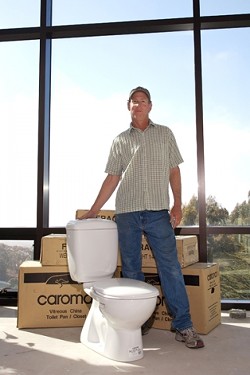 # Undaunted, ambitious Los Osos developer Jeff Edwards has a plan to save water and still build more houses. In essence, his is plan is to trade toilets for permits.

"We'll do the retrofits and bank that water credit, then we'll sell it to people who want to build houses," he said. "There will be a market-based price. My guess? $15,000 for a single-family residence. The cost would be determined by supply and demand."

Basically, under the new parameters, development can't bring about a net loss to the water basin. But saltwater has already intruded into several Los Osos wells, so if new development is to materialize, it must actually create a net increase to the basin just to be safe. With his new company, 528FLOW, Edwards is addressing this apparent conundrum with a water-saving retrofit and credit system. According to Edwards, about 4,000 Los Osos homes could be fit with low-flow faucets, showerheads, and toilets to pave the way for new homes.

The premise is simple: For every 10 to 15 two-bathroom homes that get the retrofit package at no cost to the homeowner one new home could be built. Monitoring the program, however, becomes a little tricky.

Los Osos has three water purveyors, none of which could issue building permits. The county, which does issue permits, has no water authority in Los Osos, and no system to count projected savings or distribute them among developers. Again, Edwards has a plan. 528FLOW will cover the retrofits, keep track of savings, and sell credits to developers at "market value." Through 528FLOW, Edwards isn't acting as a developer just a middleman.

"What's the shortest distance between two points?" Edwards asked. "The private sector often fills voids. And this is the fastest way to get things done. We have been dealing with this for years."

But the prospect of Edwards and his silent partners selling water credits to the highest bidder has left some county officials slightly unsettled.

County Senior Planner James Caruso, who advised the Board of Supervisors on the Los Osos water predicament, has called for a 30 percent decrease (over 2001 figures) in water use from the basin by 2010. He's instructing the county to work more closely with the private water vendors, and to consider reducing the anticipated maximum population for the area from 28,000 to 19,713. Building beyond what the basin can support or getting state water, Caruso said is not an option.

" [Edwards] sees this as a marketable commodity," Caruso said. "But we're not going in that direction the board can say whatever they want. Really, new development is not causing the problem old development is the issue. The county has focused on new development to save water, because it's the only thing we can do."

Edwards has asked supervisors to support the move to a Level III water crisis, and to promote water-saving appliances as a solution.

"I've already appeared before the board both publicly and privately," he said. "It's not a new thing. They're behind the conservation aspect."

The issue will go before the board again July 24, but Edwards hopes to begin retrofitting as early as next week to collect more precise data.

"Mr. Edwards did approach the board with this," County Supervisor Bruce Gibson said. "And we did direct staff to start looking into how programs would be implemented to preserve the basin from saltwater intrusion. In addition to that, we are exploring new development. Typically the applicants who want to build houses would have to work it out with the county."

So could a private company really keep track of water "credits" and sell them to developers to obtain building permits?

"That's the question," Gibson said. "Who would monitor this is still up in the air."

"As a utility, we have a general plan. It says we will build to a certain population the program allowed for growth," Munds said. "New growth is supposed to pay its own way, but we've also got to protect our water supply and make sure it's stable."

The city's plan required that developers retrofit to make way for specific projects, and save two gallons of water for every proposed gallon used. Developers didn't benefit directly from the retrofit other than having the cost credited toward an "impact fee." 528FLOW, by contrast, would retrofit, then cash in by selling the credits.

"The retrofit had to go to a specific project," Munds explained of SLO's effort. "A developer could not just accumulate credit."

"We don't have a government to take the reins," Edwards explained of his move. "We have been struggling for years, and we must implement something now. If the private sector steps in, it will happen more quickly. There's no exclusivity, anyone could do this it's like the Wild West."

Contributor Kylie Mendonca can be reached at kmendonca@newtimesslo.com.