Though the package includes auspicious steps to conserve and regulate water usage and examine environmentally harmful water infrastructure, the Legislature to reach consensus may have compromised the package with too many earmarks for special projects. If voters reject the bond proposal, several key provisions could suffer.

“I think the final package was definitely a compromise that met the concerns of a wide range of interests: environmentalists, farmers, developers, cities,” Blakeslee told New Times. “There were many important players at the table, but I think in the end it reflected all the interests and concerns of the stakeholders involved.” 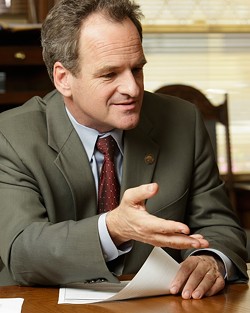 Lawmakers struck a deal in the wee hours of Nov. 4 after an all-night session and months of tedious negotiations. The five-bill package includes a requirement to reduce per-capita water use by 20 percent by 2020, increased penalties for illegal water diversion, and new regulations for measuring groundwater levels. It also contains a bill proposing the creation of a seven-member council to monitor the ecosystem of the environmentally troubled Sacramento-San Joaquin River Delta.

And the doozy: an $11.1 billion bond measure to pay for everything, including $3 billion for new water storage and reservoirs, and more than $2 billion to restore the Delta ecosystem. The bond would also award funding to various statewide water-works projects on a competitive basis.

Blakeslee was one of the few Republicans in the Assembly to vote in support of all five bills. He was quick to point out he did not add any earmarks for SLO County, but the assemblyman did say that should the bond measure pass, funding could become available for such local water projects as the Los Osos sewer should the county apply.

In the last days of negotiation, more than $2 billion in earmarks were added to the proposal—some having little or nothing to do with California’s water supply—including $100 million for Salton Sea restoration, $10 million for the Sierra Nevada Research Institute at UC Merced, $250 million for dam removal on the Klamath River, $100 million for a Lake Tahoe Environmental Improvement Program, and $75 million to the Sierra Nevada Conservancy for public access, education, and interpretive projects.

Though most Californians agree the antiquated water system originally designed for a population of 16 million must be modernized for the 50 million expected in near future, financing projects is a major point of contention.

The governor said the Legislature ignored warnings from Treasurer Bill Lockyer that the state, by issuing more bonds while it already has more than $60 billion in long-term general fund debt, could easily find itself overextended.

According to Jason Dickerson, director of state administration at the nonpartisan Legislative Analyst’s Office, as of Oct. 1, the state faced a $66.5 billion debt and that the bond issuance, depending on likely interest rates, could add between $725 and $809 million in debt service. He said debt currently costs close to nine percent of state revenues and is likely to reach more than 10 percent in the next decade.

“Bottom line, there’s no right or wrong level of debt,” Dickerson told New Times. “If voters approve of 9 or 10 percent for projects that are priorities, then simply less will be available for other services, such as education, health, and prison systems.”

Catherine Freeman, the principal fiscal and policy analyst assigned to water and coastal development at the Legislative Analyst’s Office, said should voters reject the bond, such projects as those pertaining to the delta conservancy, as well all special projects tied to the bond measure, could either be abandoned or postponed until funding becomes available. Other measures not contingent on bond funds, such as the conservation requirements and new groundwater regulations, would not be affected.

Increases in state debt, exemptions for large-scale consumers, and special projects that promise to benefit only select regions are not the only potential killjoys. Existing pump conveyor systems have damaged already fragile fish populations in the delta estuaries and some environmentalists say new conveyance and surface storage would diminish water critically needed to maintain estuaries.

Andrew Christie, who directs the Santa Lucia chapter of the Sierra Club, said the organization sees the package as “an $11-billion barrel of pork and a nineteenth-century solution to a twenty-first-century problem.”

“It’s heavy on dams and canals—infrastructure we can’t afford and that will take decades to produce a drop of water—and light on cheap, fast, effective conservation measures like water recycling, storm water recapture, and cleaning up groundwater,” Christie said. “It sticks our general fund with the tab instead of paying its own way with revenue bonds and user fees charged to the heaviest users, the few special interests whom its measures benefit.”

Christie pointed out while one bill exempts agriculture from the 20 percent reduction target in statewide water usage, the agricultural sector accounts for more than two-thirds of state water use. He also took issue with the creation of a politically appointed bureaucracy to oversee and regulate environmental impact.

“It does not bode well that the majority of the new Delta Stewardship Council’s members will be hand-picked by the governor, or that the bill decrees the needs of water consumers to be equal to the needs of the environment. That’s not what the federal Endangered Species Act says, so we may safely assume that many courtroom collisions lie ahead.”

Staff Writer Matt Fountain can be reached at mfountain@newtimesslo.com