SLO Town braces for rate increases, and nurseries stock up on native plants

If the City of San Luis Obispo gets its way, your lush lawn is going to cost you more. So is flushing your toilet.

Over the next two years, water rates may soar by 26 percent, and sewer rates by 21 percent. That's bad news for folks who enjoy a thick green lawn or water-thirsty plants such as roses or non-native exotics and there are a lot of folks like this. Take a drive around SLO Town and see how many locals favor grass and exotic flowers and plants, which require enormous amounts of water to maintain.

This past December through February, the city in preparation for 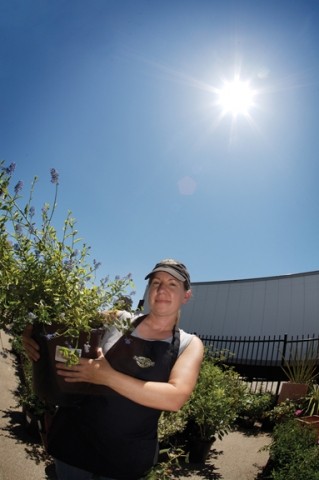 # retooling its sewer rates began surveying residential water use to create a baseline for sewer rates for the rest of the year. The idea was that locals wouldn't use much water for landscaping during the three typically wet months, so the results would show basically indoor use only. This past winter, however, was one of the driest in recent memory, bringing in just 10 inches of rain compared to the local average rainfall of about 24 inches. Many residents simply let their yards turn brown. Others bit the bullet, continuing their water-hungry ways, knowing that their sewer rates would rise later.

The point of the rate restructuring was to eliminate the inherent unfairness of low-volume water users being billed the same flat sewer rate as high-volume water users, but due to the minimal rainfall, the results of the survey couldn't possibly have measured indoor-only water use, since many residents continued to irrigate in an effort to keep their landscaping alive.

"That's something that all of our customers are going to experience," Gary Henderson, the city's Water Division manager, said of the results of this year's dryness disparity. "A lot of customers turned their irrigation systems off, and things like shrubs and grasses can go dormant. Of course, a lot of people used their irrigation systems regardless of rain, which is what we're trying to discourage. But everyone was in the same position."

The city plans to conduct such a survey annually, so if rainfall improves next year eliminating the need for off-season outdoor watering rates should more accurately reflect use.

Meanwhile, the city is also trying to figure out how to pay its $80.4 million share of the estimated $187 million cost of the Nacimiento Pipeline Project, which could potentially deliver up to 3,380 acre-feet of water a year to the city. The average household uses 62,400 gallons of water a year. With a little math and some calculations, we learn that Nacimiento could provide water for as many as 17,650 new households, which may leave some residents wondering if they're getting stuck with the bill for future development.

Not so, said Henderson, who noted that "new development has to pay large impact fees in addition to higher water rates. The point of the Naci project is meant to provide greater security, to secure multiple sources of water for the city, much like a financial portfolio. Right now we have two sources: Whale Rock Reservoir and Salinas Reservoir."

During the last extended drought, Salinas wasn't able to meet the city's needs. So during an extreme drought, what makes Henderson and the city think Nacimiento won't be susceptible to failure as well?

"You are correct that an extended drought could affect all three of these sources," Henderson admitted, "but even during the worst drought, engineering projections said that Nacimiento would have been able to supply this county's needs."

The good news seems to be barring 18,000 new homes taxing the supply that SLO Town will have enough water. The bad news is that rates aren't likely to level off after 2008. Henderson said the city projections suggest more increases will be required, likely in the form of 12 percent in 2009 and again in 2010, then nine percent in 2011 and again in 2012.

And here's one more wrinkle for you: All these rate increases can be stopped by water users. Prop. 218 and California Constitution Article XIII allow citizens affected by the increase (see the infobox) to protest in writing, and if more than 50 percent of the users do, the rate increase is dead in its tracks. What would the city do then?

"We'll just have to re-look at the options and what actions will be available to use," Henderson said.

Painful water rate increases. Continued potential for droughts. What does all this mean for green thumbs? That they better jump on the xeriscaping train. Xeriscaping, a term derived from the Greek word meaning "dry," is a method of landscaping that uses drought-tolerant plants instead of water-thirsty non-native grasses to create a visually attractive landscape.

According to several area nurseries, many local homeowners and landscapers have already begun buying more drought-tolerant California natives and succulents.

"There's been a steady increase over the years, so I think people are starting to get the hint about this stuff," noted Pacific Home & Garden bedding plant buyer Kat White. "And they're also realizing drought-tolerant can be beautiful. In the past five years, I've also noticed an increased interest in native California plants. The bedding growers, too, I've noticed are growing more native plants, so I'm able to offer our customers more options. The selection has definitely increased along with demand."

Thanks to Prop. 218 and California Constitution Article XIII, the public (either property owners or tenants responsible for paying water and sewer bills) can protest proposed rate increases by submitting a written protest against each proposal (water, sewer, and/or the proposed sewer rate structure change) to the San Luis Obispo city clerk at or before the June 19 hearing at 7 p.m. in the City Council Chambers (990 Palm St., SLO). There's also a comprehensive budget workshop that covers the rate increases to be held on May 31 at 7 p.m. in the council chamber. The city is encouraging anyone interested to attend both the workshop and the hearing.

Glen Starkey waters his driveway and parks on his lawn. Shame him into compliance at gstarkey@newtimesslo.com.