It’s pretty much an unbelievable concept, right? Well, it’s totally a thing, and it’s now here on the Central Coast. At the beginning of April, Jennifer Arcitio launched Clean and Green Auto Care, a mobile car wash that doesn’t use any water and comes to you.

“We launched on April 1 and I was so happy to get a call on April 2,” Arcitio said. “Now, we’re only a month in and I’m getting five or six calls a day.” 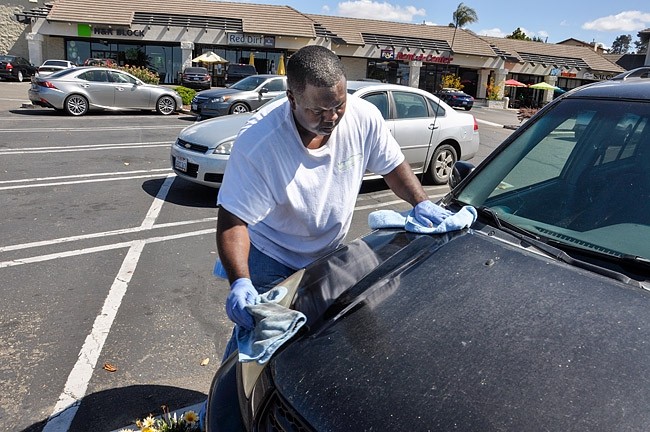 A lot of that is through word of mouth from her customers, she said, adding that the momentum with which business is ramping up is sort of crazy. She definitely loves seeing the reactions her first-time customers have after Clean and Green is finished with their vehicle.

“Just the looks on people’s faces,” she said.

When Arcitio first heard of a waterless car wash, she had the same reaction everyone has. And Arcitio kind of has a thing for keeping vehicles sparkling and shiny: She’s washed her’s—and sometimes her neighbor’s or her family’s—once a week for the last 20 years. It’s a sort of passion for her.

So when her daughter, who was attending college in San Diego, brought up the concept, Arcitio was skeptical.

“To me, I couldn’t believe it,” she said. “I thought it would scratch the paint.”

But, with the drought going on, Arcitio wanted to do her part to minimize the impact of car washing, so she went down to San Diego and checked out what this waterless thing was all about. A bottle of spray and a towel take the place of a hose, a bucket of sudsy water, and a washrag. After watching the proof of what can be done without water, her daughter suggested that it might be something that could work in SLO County.

“She said there’s a need for it,” Arcitio said, adding that the Central Coast is such a beautiful area, and everyone needs to do their part to keep resources the way they are.

Arcitio spent the next year testing all kinds of waterless washing products. Generally, they work by using a lubricant mixed with something to get the dirt off. They can be petroleum based or water based. And some work better than others. Some leave streaks or a residue on the car. When she finally landed on something she liked—a water-based solution that utilizes plant polymers (coconut, palm, corn)—it was streak free, left the car shimmering, and smelled nice, too.

“And when you’re done, everything evaporates back into the environment and the end result is a shiny car,” she said.

The trick, she said, is using microfiber towels. The best part for Arcitio though, is not wasting water or contaminating water that is then running down the street and into the environment.

An express exterior wash for a compact car takes about 15 minutes and costs $14.99. Clean and Green Auto Care also offers basic and deluxe washes which include vacuuming, interior windows, and tire and trim conditioning. The most expensive package is $40.99 and would take roughly 90 minutes to complete.

“You could be shopping, getting your nails done, and I’ll come do your car,” she said.

Interested? You can find out more and book appointments via cleanandgreenautocare.com or call 904-5585. Clean and Green will be posted up in the Kmart shopping center on West Branch Street in Arroyo Grande over Memorial Day weekend, May 28 and 29 from 8 a.m. to 7 p.m.

• Approximately 15 students from Peoples’ Self-Help Housing’s College Club and their parents will volunteer on June 12 to help families in Atascadero build their own homes through the organization’s Self-Help Ownership Program. The volunteers will lend a hand as part of NeighborWorks Week, which brings together affordable housing organizations, volunteers, neighbors, businesses, and others from June 4 through 12 across the United States. To learn more about People’s Self Help Housing, visit pshhc.org or call 781-3088.