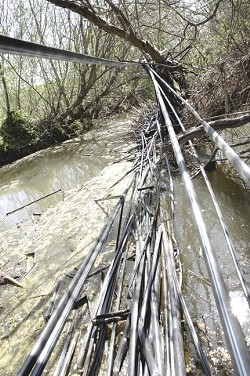 # Giant balls of agricultural drip-tubing can be found littering the waterway. Other forms of garbage and blockage are found throughout the area, including a menagerie of man-made products and large silt deposits in the creek's run-off areas, which can lead to flooding.

The flooding of Diaz's Nipomo home, first in 2000 and again in 2006, inspired him and Bishop to begin investigating the creek.

"No one can see any of the garbage unless they get into the creek, which they can't because it's considered trespassing," Diaz told New Times in a recent interview.

Indeed, Diaz and Bishop have had run-ins with the law over the years while pursuing their vision of environmental justice, but they said they continue to document the pollution because they feel the community needs to know what's happening to the creek.

It's not just the drip-tubing.

While documenting the pollution, the Creek Dogs have found everything from a rusted old car buried in the reeds to empty pesticide drums floating in puddles of grimy, dung-colored water.

Several people have been arrested for dumping in the creek over the last few years, according to the California Department of Fish and Game. Those individuals were charged with dumping cement and silt into the creek and were required to pay for the creek cleanup and restoration.

However, the declining condition of the creek indicates that even more pollution has occurred, whether from dumping or other sources.

"Nipomo Creek, for all intents and purposes, is going through a Silent Spring," said Bishop, referring to Rachel Carson's influential 1962 novel documenting the effect of pesticides on the environment.

He notes that reports conducted by multiple California environmental and public health agencies have found that water habitats in the Santa Maria River watershed are suffering from the effects of pollutants.

According to reports by the Central Coast Regional Water Quality Control Board and the Central Coast Ambient Monitoring Project, the bacteria levels are due mainly to high levels of fecal coliform concentration, a commonly used bacterial indicator of sanitary quality of foods and water.

Samples taken from Nipomo Creek contained some of the highest levels of fecal contamination within the Santa Maria River watershed, which itself has a bacterial problem throughout its system, according to a 2005 report from the water quality control board.

A 2006 board report on the region of the watershed that includes the Nipomo Creek poses questions about high levels of nitrates, un-ionized ammonia, and pesticides.

Water naturally contains less than 1 milligram of nitrate-nitrogen per liter. Higher levels indicate that the water has been contaminated. Exposure to high nitrate levels can especially be harmful to infants and people suffering from certain chronic diseases.

But the most recent reports have found that water quality of the watershed is on the upswing--sort of.

"The levels for 2007 did look better compared to previous years," said Karen Worcester, a member of the monitoring and assessment staff at the Central Coast Regional Water Quality Control Board.

That report, while completed, is not yet public. An update on water quality is scheduled for June, according to the board's website, www.waterboards.ca.gov/centralcoast.

Still, Diaz and Bishop said that the condition of the creek is far from what it used to be. The men both grew up in the area and spent their childhoods exploring Nipomo Creek and the surrounding area.

Over the years, Diaz and Bishop have noticed the decline of several species native to the area, including wild trout, meadowlarks, kites, and the California red-legged frog.

The Creek Dogs have worked to bring the creek's demise to the attention of local public officials, including the San Luis Obispo County Board of Supervisors and other county departments.

When asked about the reports of possible pollutants in the area, 4th District San Luis Obispo County Supervisor K.H. Katcho Achadjian said if the pollutants affect the county's drinking water, the Public Health Department would most likely address the problems.

"The level of nitrates [and other pollutants] hasn't been brought to my attention before," Achadjian said. "Pollution is usually caused by the strawberry coverings."

While water quality control doesn't fall under the county's jurisdiction, Achadjian said that it's an important matter that affects all county residents.

Their mission to see the creek restored to its original beauty hasn't made them the most popular people in the agriculture-dominated area, but they said it's all been worth it for the sake of the environment.

"The creek is so important to us," Bishop said. "We want to see it thriving again."

Amy Asman is a staff writer for New Times' sister paper, the Santa Maria Sun. Contact her at aasman@santamariasun.com.