Visit Art Center Morro Bay seven days a week from noon to 4 p.m. at 835 Main St. Catch Convergence - Wax on the Water through May 23. Learn more about the International Encaustic Artists at international-encaustic-artists.org.

Painting with hot wax is hard. You could burn yourself. You need the right tools. And you need patience.

"It's a very versatile kind of material, but it's pretty unforgiving, too, if you don't know how to work with it," Los Osos artist Kay Burnett said. "I think that people working with encaustic—they either love it or they hate it, and I, obviously, am one of those people who love it." 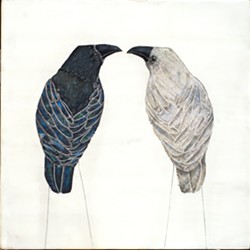 The president of the International Encaustic Artists (IEA) association described the moment she saw her first encaustic painting as "love at first sight." She never looked back after after taking a class in 2008 from Patricia Baldwin Seggebruch, someone Burnett described as a well-known member of the encaustic art community who helped get people really involved with the medium by teaching classes. Seggebruch led a workshop as part of the recent IEA retreat in collaboration with Art Center Morro Bay—ConVergence - Wax on the Water—where she also received an award for her contributions to the encaustic art community.

With more than 300 active members in the IEA from almost 20 different countries and six continents, encaustic artists from all over the world met in Morro Bay during April to participate. They attended workshops from local and international artists, and the retreat culminated with a juried exhibition of encaustic paintings and sculpture. Burnett said about 90 artists submitted more than 200 art pieces for the show, which LA-based artist and juror Pamela Smith Hudson whittled down to 46. Convergence - Wax on the Water will be on display at the art center through May 23. "Convergence in art is defined when parallel lines connect to a point, creating a sense of depth. Convergence can also mean a gathering of people. People who come from different places, have different backgrounds, perspectives, ideas, and values," Hudson said in a statement about the exhibition. "The past three years have brought us a once-in-a-century pandemic. It has created a divergence of self-isolation, both physically and mentally. ... I was touched by the artists' stories about finding their voice and motivation to overcome health issues, traumas, and feelings of isolation to create their work for submission."

Barbara Sitar, who has a piece in the exhibition and was the art center's gallery director until a few months ago, said the exhibit also acts as an educational tool to introduce others to the unique technique. She added that the art center has hosted a few encaustic workshops since the retreat, and they've been well attended by local artists.

"It's a very ancient technique, but because it's so demanding, people don't really do it very much," Sitar said, adding that encaustic was invented by Greeks in the fifth century. "You need to really know what you're doing, unless you want to set your house on fire."

Encaustic means "to burn," Burnett said. Using an electric pancake griddle or some other heating element, artists melt encaustic wax before using it. Because the wax gets hard pretty quickly, encaustic artists can only work with and melt a little bit at a time. Once the wax makes it onto a painting or sculpture, Burnett said, it needs to be fused with what's beneath it. 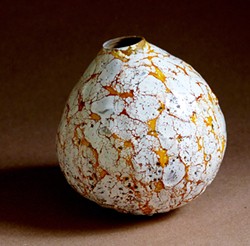 The most common method is using a torch—like a crème brulee torch that chefs use. Artists can also use a heat gun, Burnett said. But they need to control the speed and heat level they use because too much heat can melt the wax and destroy an artist's work.

Although you can use wax to paint almost anything, Burnette said it won't stick to non-porous surfaces. Sitar said artists mix the wax with resin and pigments before applying it to the surface they're using as a panel. Typically, Sitar added, artists use encaustic in one of two ways: either creating portraits or abstract works of art. Both are currently on display at the art center, as are sculptures, relief-style paintings, and mixed media collages.

Sitar said she likes working with encaustic because it fuses across media such as wood, ceramic, and sandblasted glass. She can build layers up on top of one another and then carve into them—or move the wax any time by applying heat.

"I became completely addicted to encaustic because of the magic that this medium provides," Sitar said. "The wax hardens very fast. You can do one or two brush strokes before having to dip it in the hot wax again. ... Wax is not obedient; it's like a dance." Δ