Before I begin, I have a bit of stipulation. NO PIRATES! 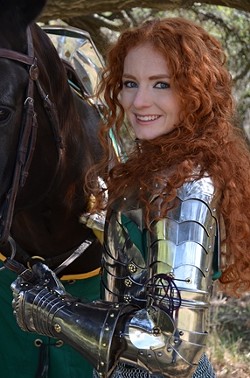 The Central Coast Renaissance Faire may not constitute real time travel, but if there’s one thing science fiction movies have taught me about the fabric of space-time, it’s that no one really wants that anyway: too much of a chance of preventing yourself from existing. But this event does try to be as authentic as possible to the Renaissance—and let’s be frank, it’s pretty darn convincing! Setup for the event is laborious, with pains taken to make every vendor fit the period. Each vendor must dress to fit the occasion, and every merchandise stand—and yes, I do mean the stand itself—must be at the very least feasible for the era. Any metal in the booths must be covered up with something else to keep the atmosphere. And, according to Rick Smith, co- founder and now media coordinator of the faire, a certain foot is finally being put down: No pirates! The event is set in England in 1585. Pirates came 100 years later.

The Renaissance Faire is an annual event for which El Chorro Regional Park is transformed into Donneybrooke, England, a quaint village under the reign of Elizabeth I. It has been a long winter for Donneybrooke, and with the frost at its end, the peasants are celebrating the fairer weather as well as a visit by Elizabeth herself. Attendees step through the gates into a marvelous place of shopping and improvised entertainment. Peasants and nobles interact with guests as well as one another in the creation of a new world, or perhaps an old one, as it were. It’s a tradition much beloved by Central Coast locals, and it inspires quite a bit of wonder.

Even the merchandise fits the period—as does the food. Don’t expect to find burgers, for example. Smith laughs, however, when he admits that at times the food has been fudged a bit (do you see what I did there?), such as the occasional permission to sell Dragon Dogs, which are hot dogs with a more exciting name.

Performers who fill the streets go to great lengths to develop the personas they don; with nobles based on real people, the actors must rise to the challenge.

“You have to pick somebody not chosen already,” Smith explained, “make a costume for that person, know all about them and how they interacted. You have to know how to dance, have a name, know what you do for a living, how you eat, how you make your money.”

It’s so much easier to be a peasant, Smith said, since peasants can be anybody. Plus, on a hot July day, do you really want to wear a noble’s heavy clothing?

But don’t think the man to be an iron fist when it comes to historical accuracy; he’s just trying to give attendees the best experience possible.

“What we really want to have is for guests to get caught up in the fantasy,” he explained.

Though citizens of the quaint Elizabethan village work hard to make their characters as fleshed out as possible—bearing in mind such things as what race they are and how races interact—many of them do so without working for the festival itself. Groups of “guilds,” often grouped by trade or ancestry, have been known to assemble from all over—apparently few of the guilds are even local! For that reason—as well as life just getting in the way, even for people living relatively close to each other—the fictional premise of a long winter ending is enhanced. Often these are real friends who truly haven’t seen each other in a year and are finally meeting again, adding a touch of authenticity to the experience.

The Central Coast Renaissance Faire is a local tradition of 28 years, a long time for an event of its sort. Yet humorously enough, the idea for the faire came about almost accidentally. Like so many things, this one began with alcohol—in this case, the attempt to sell it. It was 29 years ago, Smith explained, and Lawrence Winery (now Corbett Canyon) had a nice stock of wine to sell. In an attempt to draw patrons, a team was assembled to throw a free Renaissance Faire for the public at the winery grounds. So the faire was created, costumes were donned … and attendance was low. On top of everything, it was snowing at the faire, ensuring a no-go for the next year.

But that wasn’t enough for Smith, nor for several of the other producers of the festival. It was a fun idea, even if one that didn’t quite pan out the first time, and before they knew it, they had changed the location to El Chorro Park, changed the date to July when it wouldn’t likely snow, and done a much better job of advertising. It was the first real year of the Faire, and right away, thousands of people came.

Smith estimates the average number of visitors to the weekend event is 4,500, with its biggest year so far at 8,000. One of the appeals, he believes, is the elaborate clothing. Visitors themselves aren’t required to dress up, but are encouraged to do so if they’d like. Costume pieces can be purchased at the many booths within the grounds, as can swords, both metal and wooden. Smith noted his surprise at just how many men walk out with swords.

There are also some nine events within the faire itself, such as the ever-popular jousting tournament. It’s real jousting, too, dangerous and painful. This year in particular the joust is highly anticipated for having one of the few female full-contact jousters: Lady Victoria, a lively, multitalented woman with long, curly red hair quite reminiscent of Merida from the Pixar film Brave.

Other events include the Merry Wives of Windsor, a group of comedic, bawdy singers; a comedy starring a macaw; juggling; and a piece explaining how the Queen, with such elaborate, formal garb, even manages to get dressed for events. On top of that, there are all the wonderful performances on the street by both people who work at the faire and people who don’t. Be warned that you may be jostled if something you do might have been looked down upon in the time period—for example, not wearing a hat if you’re a woman. As madcap as interactions with performers can be, though, don’t worry, it’s all in good fun. Smith says these are people who love posing for pictures, so don’t worry about the rough exterior, and don’t be afraid to ask!

And remember, no pirates!

Intern Chris White-Sanborn bites his thumb at no one. Reach him through Arts Editor Anna Weltner at aweltner@newtimesslo.com.