'We give good backstage' 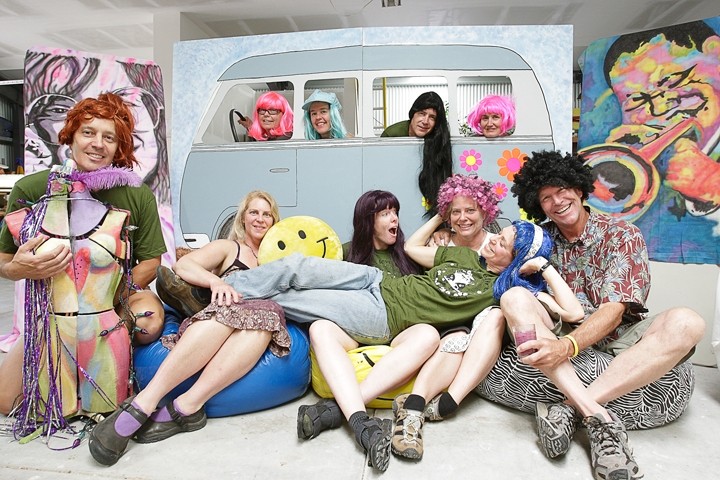 Behind the inspired performances on the outdoor stage at the annual Live Oak Music Festival is a magical and artistic world where musicians are treated like honored guests. Although the audience never sees it, the festival’s renowned backstage ambiance and hospitality have made Live Oak a top choice for local, national, and international musicians.

“Performers are consistently astonished with the quality of the décor, the atmosphere, the food, and the wine for such a small festival,” said backstage manager Janelle Younger. “My favorite thing when musicians arrive is to take them on a tour of the decorations. They bring their friends backstage to see everything”—just like the way locals take visiting friends to see the famous bathrooms at the Madonna Inn, she added.

Ambiance coordinator Barbara Bolton and her dedicated team of volunteers spend months each year planning and creating the elaborate decorations that transform a patch of dirt and blank white tents backstage into an interactive art installation for the musicians.

Recycling and reusing materials they find in Dumpsters, garage sales, and swap meets, the crew members create lifesize dancing figures, giant mushrooms, psychedelic banners, shiny wall hangings, even a waterfall. Every year their creativity takes the décor in a new direction, often reworking the material from previous festivals to stay within their low budget.

“We’ve come a long way from the our first Live Oak décor 20 years ago, when we had some old cowboy boots filled with dried flowers,” Bolton recalled as she and her crew put the finishing touches on this year’s artistic creations.

With the Live Oak theme of “Peace. Love. Dirt.,” the ambiance team has added a “summer of love” touch to the backstage look for the upcoming festival.

An almost-lifesize Volkswagen bus made of thin plywood—complete with ’60s-style stick-on flowers and sagging Indian-bedspread curtains in the back windows—offers performers the opportunity to pose for Polaroid photos with their faces in the window cutouts.

In the barn workshop where their creative juices were flowing on a recent weekend, Renee Punzi and Joanne Tarkington ran into the bathroom with their latest psychedelic endeavor to see how it looked under the black lights.

Shelley Zoff and Liz Cordoba studied a schematic of the backstage tent layout, planning out the electrical requirements for the lava lamps and other lighting, as Tarkington announced that she found a recipe online for “lava lamp goo.”

None of the ambiance crew members are artists or musicians, Bolton pointed out. Their professional backgrounds range from chemist and nuclear scientist to midwife, teacher, office manager, general contractor, and café owner. Creating an elaborate backstage world for Live Oak is one of their main creative outlets.

“It makes such a big impression on the performers,” said KCBX Public Radio General Manager Frank Lanzone, who spends a lot of time backstage during the Live Oak Music Festival, the main fundraiser for KCBX.

“I hear them saying, ‘This is cool, this isn’t the usual situation we find at festivals with asphalt and a 10-by-10 shade structure with the hot sun beating down.’ Ninety-nine percent are content and happy, and I’m sure their performance reflects that. Most of them say, ‘Invite me back, this is my favorite festival, can I be your mascot so I can come every year?’” Lanzone said.

Bon Temps chef Phil Lang and his crew create three delicious meals a day for the performers, adding to the reputation of Live Oak’s backstage.

The festival’s logistics coordinator Jo Jackson said, “This is not backstage at Carnegie Hall or even the Lobero Theater. There’s dirt.” Carpets, executive-style portapotties, even a private massage tent all help create a unique backstage atmosphere for the musicians, along with a welcoming sense of community that inspires them “to sing their hearts out,” she said.

Lanzone said he’s looking forward to seeing what the hardworking ambiance crew comes up with this year.

“It just blows me away,” he said, adding, “I think if you look hard enough, you’ll see those old cowboy boots are still there somewhere, too.”

Contributor Kathy Johnston can be reached at kjohnston@newtimesslo.com.