We must extend unemployment benefits

Why we would put the needs of the wealthiest among us before the needs of families struggling just to get by? 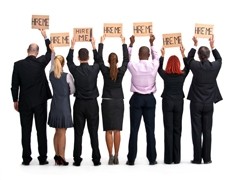 As we enter the holiday season, I am ever mindful of the thousands of Central Coast families struggling through this recession, especially those who continue to look for work. Yes, we have come a long way since December 2008 when we were losing nearly 800,000 jobs a month. And yes, we have now seen nine consecutive months of private-sector job growth and the creation of a million jobs in that time. But we all know that job growth has been too slow to make up for the millions of jobs lost in the recession, and that has been frustrating.

I’ve supported a variety of measures to stop our economic slide and turn our economy around. But this has been a very deep hole to dig out of, and the time it is taking is exacting a painful toll on many of our friends and families.

The House of Representatives voted on Nov. 18 on a bill to continue the federal extension of benefits beyond the Nov. 30 deadline for expiration. The bill did garner a majority of votes, including mine and those of virtually all House Democrats.  Unfortunately, it did not attract enough Republican support to reach the two-thirds majority required for passage. In fact, only 21 Republicans, or 12 percent, voted for the bill. The Democratic House leadership has announced we will try again in the coming weeks.

Let’s be clear about the stakes here: Without this extension, more than 400,000 unemployed Californians will lose their benefits by the end of the year. Of those, nearly 75,000 are exhausting their six-month limit of state benefits. Without an additional federal extension, they will have their unemployment insurance cut off after only six months of looking for work during a time when the unemployment rate in our state tops 12 percent. In addition, this would be the first time in 75 years extended unemployment insurance has expired with the jobless rate above 9 percent.

During the floor debate on the most recent extension bill, many opponents of the legislation said this bill, which would help nearly 2 million people pay their bills and feed their families, costs too much. A recent report from the nonpartisan Congressional Budget Office (CBO) reveals the unemployment insurance system kept an astonishing 3.1 million Americans, including 1 million children, out of poverty in 2009. CBO also confirms that the overwhelming majority of families who benefit from unemployment insurance are middle-class families. It is clear that the safety net provided by unemployment insurance has been critical for the American middle class.

Incredibly, many of those same people decrying the cost of the bill have also been advocating for the extension of the Bush tax cuts for millionaires and billionaires. That proposal would add another $700 billion to the deficit over the next 10 years and, according to most economists, have negligible economic benefits. I support tax cuts as much as the next person: I voted for most of these originally. But I don’t understand why we would put the needs of the wealthiest among us before the needs of families struggling just to get by.

I am pushing for the extension of unemployment insurance. My hope is that my Republican colleagues, having had a chance to contemplate what losing this small benefit will mean to millions of unemployed Americans and their families during this holiday season, will have a change of heart. ∆