And jazz you, and country you, and hip hop you

It feels as though we’ve been working on the New Times Music Awards all summer (because we have) but they’re finally here this weekend.

Proceeds will benefit the Arts Obispo Mini Grants program like last year, but unlike the one-night event of 2009, this year’s awards and showcases are stretched over five shows and venues over four days.

See the program on page 31; check out a photo essay about the making of the trophies on page 24; and read about me peeing with excitement over the event on page 45. In other words, we’ve got it well covered, but here are a few more details.

On Thursday, Aug. 19, the Newties kicks off at Downtown Brew (doors at 7 p.m.; all ages; $5) for the rock category with Callista, Axia, and Criticnue.

Steve Key was one of the judges for the songwriting contest, and he gathered two other professionals to judge the event.

Cliff Stepp wrote “Country Song” for Pure Prairie League, featured on their first album, their live album, and it was later covered by various country rock and bluegrass bands. He also wrote for a duo, Just the Blues, produced by B.B. King. Three of his songs are set to be released by local artists Valerie Johnson & Al B. Blue.

Craig Louis Dingman has played in bands since the ‘60s, and now fronts Code Blues. He’s played original music solo and in groups around Southern California, in venues ranging from the orchestra pit of theatrical musicals to private parties and such nightclubs as Downtown Brew. He also won two “Best Song” awards in the West Coast Songwriters Competitions.

At each event, we’ll be hauling around an awesome Ernie Ball Candy Red Silhouette Guitar that retails for $1,900, as well as two high-end headphones donated by Audio Ecstasy: Grado SR225s ($200) and Sennheiser HD515s ($130). These items will be raffled ($5 per ticket or $10 for three), and the winner drawn during Sunday’s event (need not be present to win!).

I hope to see you at every single one of these shows to support these talented performers and raise some money for Arts Obispo.

Scratch that itch for a cause

My buddy Doug Groshart is going to be busy this weekend. In addition to performing at the NTMA on Saturday, Aug. 21 as both a soloist and with his band The JD Project, his band will also rock Paso’s City Park during a free concert from 5:30 to 7:30 p.m. this Friday, Aug. 20. But that’s not all!

On Saturday, Aug. 21, The JD Project is performing at a fundraiser for Community Action Partnership of San Luis Obispo and the Prado Day Center. I’ll let him explain.

“Throughout college and afterward, I was in a band that attained a decent level of success through touring a good chunk of the country, recording three CDs, and working our tails off marketing ourselves long before the advent of Facebook, MySpace, and the like. The kids these days! They’ve got it so easy! But I digress,” quipped Doug. “The name of that band was Itchy McGuirk. I started the band way back in 1992 with a singer/guitar player and great friend named Mark Kafoury.

“I’m not sure if you’re aware of it or not, but Mark passed away unexpectedly this past February. His family and friends put together a wonderful memorial and fundraiser event up in the Bay Area (dubbed Markfest) and gathered musicians from various stages of Mark’s life to play some music and remember the smiling, laughing, and always-positive Markos. The event led to the reuniting of Itchy McGuirk for the show, with Dan Ernst (a longtime friend of Mark’s) picking up the guitar in Mark’s honor.

“The event was a huge success,” continued Doug. “Not only were we all able to get together and remember the man himself, but we were able to raise a good chunk of change in his name. That money has been donated to Community Action Partnership of San Luis Obispo, specifically in their homeless services department. Doing anything he could to help homeless people (and all people, for that matter) was an everyday part of life for Mark. He not only talked the talk of giving and helping, he walked the walk.

“The wonderful event in the Bay Area spawned the idea of bringing it all back to the birthplace of Itchy McGuirk for another reunion show, and raising even more money to donate to CAPSLO and the Prado Day Center, both wonderful organizations providing much-needed assistance to the homeless people of San Luis Obispo.”

There’s a golf tournament, but this is the music column, so here’s what you need to know: From 5 to 10 p.m., hear music from Andrew Spearman Blake, Joe Koenig, The JD Project, and Itchy McGuirk. Tickets to the concert are $20, available by calling 595-4000 or at the door. If you can’t make it, feel free to donate anyway!

“I know that every day since Mark passed, I’ve tried to do my best to capture the energy and excitement he would have had for an event like this,” said Doug. “I hope you can join us for a great weekend of memories (old ones and new ones), charity, fun!”

In addition to hosting opening night for the NTMA, Downtown Brew has other really big shows, including American Idol winner Taylor Hicks on Tuesday, Aug. 24 (7 p.m.; 21-and-older; $25 presale or $27 at the door). The JD Project opens (Those guys are everywhere!).

Hicks, a rock/blues/R&B vocal powerhouse, won Season 5 of Idol, which happened to be the most watched television program during the past decade, with an average of 31 million viewers tuning in each Tuesday and Wednesday. During the last two years, Hicks has seen his Arista debut album certified platinum; performed with the likes of Earth, Wind & Fire, The Allman Brothers, and Willie Nelson; toured through Asia; penned a brisk-selling Random House memoir; and made his Broadway debut in Grease.

Before Hicks arrives on Tuesday, though, you should check out reggae star Tippa Irie on Friday, Aug. 20 (7:30 p.m.; all ages; $14 presale or $16 at the door) with Jah Sun opening. Anthony Henry (aka—Tippa Irie) emerged from England’s Saxon Sound International, the star-studded traveling sound system that helped launch the careers of such artists as Maxi Priest, Papa Levi, and Smiley Culture.

On Saturday, Aug. 21, enjoy an evening of singer-songwriter rock and pop with Mat Kearney (7:30 p.m. all ages; $20 presale or $23 at the door) with opening act The Jane Carrey Band. Kearney is a Nashville-based performer with a couple critically acclaimed albums under his belt. Jane, the daughter of comedian Jim Carrey and the mother of five-month-old Jackson, has been singing, writing, and playing instruments all her life.

Wouldn’t you know it? We managed to schedule the New Times Music Awards during the busiest music week of the summer. Here’s what else is going on.

Sixities cover band Unfinished Business will play the corner of Nipomo and Higuera streets this Thursday, Aug. 19 during Farmers Market from 7 to 8:30 p.m. All members played in local bands during the ‘60s and still have a passion for tunes by The Animals, The Zombies, The Beatles, The Beach Boys, The Rolling Stones, and various Motown artists. 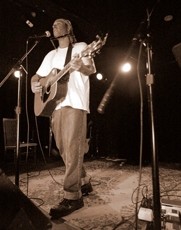 Dan Bern and Common Rotation play Thursday, Aug. 19 at the Steynberg Gallery (8 p.m.; all ages; $10). After collaborating on an indie movie soundtrack (Drones), Dan Bern and Common Rotation have continued to work on various projects together, including recordings for Jonathan Demme’s Off-Broadway production of Beth Henley’s Family Week, an album of new Dan Bern material, and the upcoming release of Dan Bern’s greatest hits recorded live in Hollywood.

The Zongo All-Stars are hosting the second Annual Zongo Yachting Cup this Friday, August 20. The sailing race goes from Morro Bay to Avila Beach, and there’ll be continuous live music for 11 hours in Avila Beach starting with Zongo All-Stars on the boardwalk for Farmers Market from 4 to 8 p.m., followed by local reggae act OsoSol, who’ll keep things going at Mr. Rick’s at 8. The whole thing culminates with an all-star super jam from 9 to 1 a.m.

On Friday, Aug. 20, the Paso Robles Youth Arts Foundation hosts a free youth dance party from 6 to 8 p.m. followed by a screening of the film B-Girl, about female break dancer “Lady Jules” Urich (90 min.; PG-13). Tickets for the movie are $10 and include concessions of pizza, ice cream, sodas, and more.  Advance tickets are available at PRYAF or by calling 238-5825.

If you want to see Peppino D’Agostino at Coalesce Bookstore this weekend, you’re out of luck. The SLOfolks concert sold out! But wait! There’re still tickets to see this wildly inventive guitarist on Saturday, Aug. 21 at Castoro Cellars (7 p.m.; all ages; $22; call 238-0725). The doors open at 6 p.m. and for $12 more you can enjoy a catered dinner by Bon Temps Creole Café. Carlos Reyes will join Peppino for this show.

Vardo and the Lost Dogs, a four-piece hard driving rock band, plays from 3 to 6 p.m. on Saturday, Aug. 21 at The Fuel Dock.

The Jack House is the place to be from noon to 5 p.m. on Sunday, Aug. 22 when Cross Bros., American Dirt, and Bootsie Merango play a skate park fundraiser ($10 barbecue; $3 for kids).

On Sunday, Aug. 22, the Avila Beach Resort continues its “Sundays on the Sand” free concert series with a 1 p.m. show by local reggae act The Kicks.

This Sunday, Aug. 22, the Paso Robles Inn Ballroom hosts Counterpoint from 3 to 5 p.m. The quartet performs multiple part harmonies in a wide array of styles including jazz standards of the Great American Songbook, the music of Earth, Wind and Fire as well as the Doobie Brothers, James Taylor, Dianna Krall, and others.

This Sunday, Aug. 22, the Famous Jazz Artist Series at the Hamlet should be called “Local Boy Makes Good” when guitarist Graham Dechter, who grew up in Cambria, showcases selections from his upcoming recording Right On Time. New York pianist Jeremy Siskind and New York bassist Will Snyder will accompany him, with series co-producers Charlie and Sandi Shoemake (vibraphone and vocals) sitting in. There’s a 4 p.m. show ($15) and a 7:15 p.m. show ($12), or see both for $20. Call 927-0567 for reservations.

Santa Fe’s Round Mountain, a duo of brothers Char and Robby Rothschild, really mixes it up, throwing together Bulgarian zydeco, West African rhythms, wild bagpipes, trumpet, accordion, and beautiful acoustic songs. See them on Tuesday, Aug. 24 at Steynberg Gallery during the Songwriters at Play showcase (6:30 p.m.; all ages; $5 at the door).

High Scores & Records artist The Shants, an Oakland-based Americana band that includes former SLO Town scene maker Carver Cordes, plays Last Stage West this Wednesday, Aug. 25 (6 p.m.; all ages; free) as well as a free in-store at Boo Boo Records on Thursday, Aug. 26 at 5 p.m. Though together only a year, the band has already garnered praise from FILTER, No Depression, San Francisco Chronicle, and music blogs Beat Surrender and A Truer Sound.