When the economy gets tough, the tough pack up their sets and tutus and flee the PAC in search of a more affordable performance venue. At least that’s what Civic Ballet Artistic Director Drew Silvaggio has opted to do, trading in high production values for the opportunity to experiment with movement. For the second spring in a row, Civic Ballet company members will perform a series of shows at the SLO Little Theatre, called The Slightest Movement.

Silvaggio’s painting the venue shift—which some might call a downgrade, at least in terms of audience size—as an opportunity to try something new.

“You rent out the PAC to the tune of $30,000 and you’re making a sure thing,” he explained. “This is what we can do and it still has a sense of artistry, even more so than a show like The Nutcracker. This isn’t really about appealing to anybody. It’s mainly about producing work that I like and hopefully work that other people like as well.”

Over the course of four performance dates, between April 11 and June 13, Silvaggio’s dancers will perform somewhere in the ballpark of 20 independent pieces, averaging six per show. During last year’s show, Silvaggio realized that he had made the mistake of cramming too many dancers onstage, to overwhelming effect. And because he painstakingly crafts each piece to elicit the greatest emotional response, he forgot to pull back when it came time to choreograph for a smaller space. Silvaggio realized that working in a smaller space allows him to pare each piece down to its core: the story.

To keep cast sizes down, Silvaggio violated his self-imposed rule against double casting. Audiences who attend each of the four nights might see the same performance repeated, but with an entirely different cast. In the past he’s avoided it because he wants each of his dancers to feel ownership of their role. But during rehearsals he’s enjoyed watching them find new ways to assume possession of a role. The dancers watch each other, learning from one another. And, in turn, two new pieces are created, both with the same steps and music but propelled by an entirely different vehicle.

The performances Silvaggio and his 30-member company are creating range from two to 10 minutes. They are danced to a classical interpretation of the Tetrus theme song, a Mountain Goats song about an alcoholic couple hell-bent on destroying one another, and the Pink Floyd song “When the Tigers Broke Free” chronicling the death of bassist Roger Waters’ father in World War II. 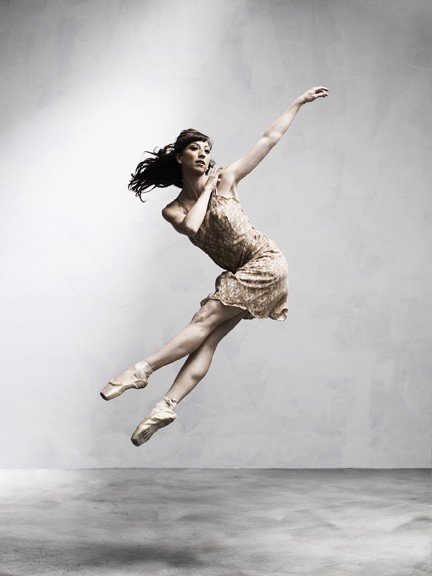 Costumes and sets are a notch above last year’s Slightest Movement offering, which mostly consisted of black leotards and tights. This year, Silvaggio turned to Overstock.com and wound up purchasing lanterns and ankle-length parkas complete with hoods trimmed in faux fur. He makes extensive use of chairs, as springboards, cradles, and objects of abuse. It’s still costume and prop-lite, particularly when compared to spring productions Civic Ballet has staged in the past. But Silvaggio likes the added emphasis on the story, adding that choreographers who start with a prop and expand it into a story are working backwards.

Some pieces, like a dance set to The Dave Matthews Band’s “Captain,” are being resurrected from the dead. Silvaggio originally constructed the piece as an expression of frustration that other people were minimizing his opportunity to express himself creatively. “Love Equals Tetrus,” is also making a comeback. The company performed the dance during last year’s Slightest Movement series and Silvaggio completely reworked it for the new show. The dancers will perform to a reading of the poem that inspired the piece, an idea Silvaggio insists he should have incorporated into last year’s performance. Of course, had he started out where he intended to finish there would be no creative process, no evolution. And Silvaggio’s worked as a choreographer long enough to respect the concept of a journey, both emotional and artistic.

If the Slightest Movement had a masterpiece—and no one is necessarily making this argument—it would probably be “Moment.” When starting this piece, Silvaggio decided to subvert traditional working method yet again by allowing the music’s lyrics to tell the story. The three-and-a-half-minute song—Pink Floyd’s “When the Tigers Broke Free”—served as the inspiration for a 10-minute piece, the first two minutes of which consist merely of walking.

“It’s going to be a powerful thing to watch,” said Silvaggio, of the dance. “It’s kind of jarring. I said ‘either this piece is going to be beautiful and powerful or it’s going to be the corniest thing ever.’ But that’s the line I walk. And I’m not afraid of it. Let it be corny, is what I say.”

Last year, when it came time to name the endeavor, Silvaggio turned to local photographer Barry Goyette, who is usually tasked with taking promotional photographs for Civic Ballet. To Silvaggio, the name was pretty much a name. But Goyette grasped the fact that a name has the ability to both attract and repel. So they brainstormed words that represented everything they wanted from the performance—an intimate setting, a contemporary performance. Slightest Movement encompassed all of that. What Silvaggio is most hoping to convey though, is the emotional accessibility of the work. He wants viewers to draw parallels between their lives and his choreography.