The Peach Rebellion is available in hardback at the downtown San Luis Obispo Barnes & Noble. Author Wendelin Van Draanen will be there on Sunday, May 29, between 1 and 2 p.m.

The Pismo Beach author's first work of historical fiction is full of dribbling, sticky peaches, their juice, pits, and fuzz, as well as a summer of learning and lessons for three high school girls from very different backgrounds in the 1940s Central Valley.

"It's a story about bridging differences and coming together as people who are very different to accomplish a big thing," Van Draanen said. "What brings them together is a monumental thing, and they end up breaking a lot of rules and breaking convention and they go on a big adventure."

Van Draanen has written more than 30 novels for young readers and teens, including the 18-book Edgar Allan Poe Award-winning Sammy Keyes mystery series and Flipped, which became a Warner Brothers feature film with Rob Reiner directing. Right before the pandemic started, she released her first work of non-fiction, Hope in the Mail: Reflections on Writing and Life, which is part writing guide and part memoir. She said she started writing The Peach Rebellion about three years ago.

When New Times spoke with her on May 20, Van Draanen was on day three of a 13-day book promotion tour of nine schools and 19 stores that will culminate at the Barnes & Noble in downtown San Luis Obispo on May 29, where she'll be signing her new book and other favorites from 1 to 2 p.m.

Two young women tell the post-Depression, post-World War II era story: Peggy Simmons, who grows up on a peach farm, and Ginny Rose, whose parents migrated to California from Oklahoma during the Great Depression. Simmons' parents own a peach orchard, and her brother focuses on the fieldwork while Peggy mans the farmstand, including selling and baking peach pies and preserves. Ginny Rose works at a peach cannery, where she stands for hours in a hot warehouse sorting peaches before going home to tend to the household chores and her three little sisters.

"I had a lot to figure out about the time period because I wasn't around in 1947," Van Draanen said with a laugh, "and I didn't know a lot about the Central Valley and the Dust Bowl migration."

She started her research with her husband's family, who are from the Central Valley. Her mother-in-law worked in the cutting sheds (similar to Ginny Rose) when she was younger. When doing research on what that was like, Van Draanen said she went down the rabbit hole of gathering as much information as she could on Dust Bowl migration and why people came to California.

"Having lived in California my whole life and being in communities where there are people working in the fields all the time, so getting to know that side of California better, it kind of spoke to me as something that I should know about," she said.

She hunted through documents at the historical museum in Riverbank, where she met some women who helped her learn even more. She also interviewed several people, including one of her neighbors who happens to own a peach farm in the Central Valley.

"We went out to his farm, and he let me drive his tractor. I got stuck in the mud. It was a whole thing," she said with a laugh.

Before she met her neighbor, she was already thinking about where a peach comes from and what it takes to create one—all of the elements that have to come together in harmony—and how that could become a sweet metaphor for people. 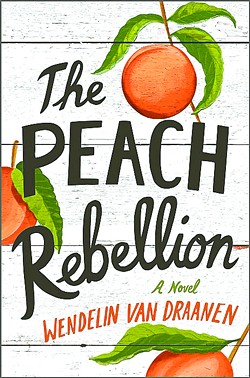 "Water and earth and sunlight come together to make this amazing thing like a peach," she said. "Coming together can get us to create something beautiful and miraculous."

The story follows Peggy, Ginny Rose, and a banker's daughter, Lisette, through one summer of love, big decisions, and catalysts for change. Although the high school students have very different lives, what they have in common, Van Draanen said, is that their fathers dictate their lives.

"I'm always a proponent of girl or women power, and although I don't preach it, I demonstrate it," she said. "Although they're three different people from three different walks of life, they simultaneously rebel."

Peggy, caught in the middle of Ginny Rose and Lisette, starts to wonder if the girl from Oklahoma and the banker's daughter will ever see eye to eye. Van Draanen walks readers through their lives, their differences, and what happens when they push past their own misconceptions and stereotypes to actually hear one other.

"It's kind of a microcosm of what I wish we could do as a country," Van Draanen said. "To find ways to listen to each other and be respectful of each other and try to walk in somebody else's shoes for a little while so we can see why they feel the way that they feel about things." Δ