We're number ... whatever: The best and worst of SLO County, as determined by people who don't actually live here

Since 2011, when Oprah decreed it, the city of San Luis Obispo has been the reigning happiest town in America. In fact, SLO County frequently tops lists of best weather, best places to drink wine, best places to commute, best places to vacation, and best places to live. Locals know this already, that’s why they’re here. SLO may be the happiest, sunniest, wine-friendliest county in the world, or maybe those designations are completely meaningless.

This all started with Dan Buettner’s book, Thrive, which looked for common denominators among places with happy, healthy people. Buettner came up with the four happiest cities in the world, SLO among them. Chapter five is called “San Luis Obispo, A Real American Dream.” Basically, people here have opportunity, leisure, and really short commutes to work. That’s the American Dream in a nutshell—we want to work, but not too much, and we want to drive our cars, but not in traffic for hours a day.

After Buettner’s designation, other outlets repeated the same lines about SLO. Wide sidewalks, outdoor space, bike paths ... and barter. Apparently there is a strong bartering culture among locals, according to people who don’t live here. This writer once traded an opened box of terrible, cheap wine for a bike frame on Craigslist, so this is basically confirmed. Locals may not be good at trading, but it happens.

Buettner and his ilk really give a lot of credit to the city planners for making it hard to drive in town and easy to bike and walk. Several articles even mentioned the city’s pedestrian-only downtown. How progressive. This must be where the barter bazaar is held, next to all the affordable housing probably. This rumor was repeated far and wide and likely referred to  Mission Plaza. After an extended game of telephone, the one-block park in front of the mission grew into a car-free pedestrian heaven. It’s an easy mistake to make, if you’ve never actually been to San Luis Obispo.

In addition to the pedestrian perks, SLO’s applauders loved the city’s restrictive ordinances: No drive-thrus, no tall buildings, no smoking, no big garish signs on buildings, and no loud parties. So, is the key to happiness state control? 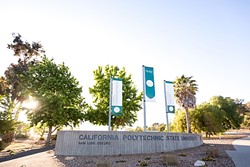 Cal Poly SLO didn’t hit No. 1 in any recent national rankings that could be found. But here’s one title that the student body can be proud of: The best place to collapse a roof in the early morning on a school day, using nothing but the bodyweight of a few dozen undergrads and their respective red cups.

It’s worth noting that those Mustangs were some of the hottest students in the country. According to Niche.com, Cal Poly ranked 12th for colleges with the hottest guys. Cal Poly also ranked 43rd for the hottest college girls, according to Niche.com and Bro Bible. No explanation was given for the ranking, though judging by the article’s picture, it’s probably about boobs. There was no picture to go with the hottest guys ranking, so it’s hard to say if it’s based on boobs or something else. It’s also unclear why Cal Poly dudes were ranked so much higher.

College Choice ranked Cal Poly fourth in its Best of the West ranking, based on affordability and post-graduation job prospects. Travel & Leisure called SLO the third best college town, saying, “The town caters to the student population with events like free outdoor summer concerts in the Mission Plaza every Friday evening and an international film festival held every March.”

Since when did the town cater to students? When the City Council made partying all but illegal? When they began holding summer events (summer being the time when students are gone), or was it when the city started holding an expensive and artsy film festival? This ranking isn’t based on student preferences.

Wallet Hub also called SLO one of the best college towns, based on “opportunities” and “youth-oriented environment.” In the same ranking, Wallet Hub also listed Cal Poly at 167th for affordability, which is fine if parents are paying the rent.

But what students really want, according to Bro Bible, is a cocktail with a disgusting history that includes a bar rag, and a bar that smells like a frat party. Bull’s Tavern was called the 54th best college bar in the country. That really doesn’t say much about the state of college bars, which apparently is why students have taken to drinking on roofs.

SLO County isn’t just the best place to live, it’s also a great place to vacation. Sunset magazine said SLO has the best weather in the nation, and LA Times called it the best vacation spot. Both are vicious rumors that should be dispelled often and adamantly until the beaches become significantly less crowded. Wallet Hub disagreed about the weather, scoring it at 76 out of 100. Or did they mean it’s about 76 degrees almost 100 percent of the time? Either way, locals have a lot of work to do refuting such claims.

And the wine? Well, Sunset named SLO County one of the Best Wine Escapes in the West. Edna Valley was called one of the best “10 mini wine escapes” because there are also oysters at Avila. Confusing. The magazine also titled South County one of the “Top 15 secret wine country escapes.” That sounds like the plot for a Martha Stewart prison escape movie. Just be sure to get that purple gold before the county runs out of water.

And California’s an absolute dreamscape for people who love fresh produce. We’re lucky as hell to have such access—San Luis Obispo alone has three weekly farmers markets. But is our kale really better than anyone else’s? Sunset thought so.

SLO apparently has the “coolest” hardware store in America: Miners Ace Hardware. Ace Hardware’s corporate office issues this ranking among its own stores, so it’s with a grain of salt, but they do have self-serve popcorn and a wide assortment of canning jars, so this ranking seems pretty legit. Sunset called SLO one of the best towns of the future, whatever that means. Maybe it has something to do with SLO being the 86th smartest place in America? Men’s Journal also thinks SLO is one of the coolest towns. The magazine’s “Think Small, Live Big” spread on small towns pointed out the obvious: “No one moves to San Luis Obispo to get rich.” That’s probably because you have to be rich already to live here. Maybe that’s why people are so happy.

There’s no nice way to say this: SLO leads the state in bicycle deaths per capita. Five people died last year riding their bikes in SLO County, and each of those deaths was essentially preventable. SLO Bike Coalition Executive Director Dan Revior said this should be a watershed moment for the county, an opportunity to address bike safety and the need for bike infrastructure. It’s funny that a town that ranks fourth for commuting (according to obrella.com) is also the most dangerous place in the state to commute by bike. Or maybe funny isn’t the right word. It’s worth noting that SLO County isn’t always at the top of this list. In 2011, SLO made the ranking, but there were several years in recent memory when no bicyclists were killed on the roads.

For thrill seekers, another really scary, dangerous thing to do in SLO County is visit Atascadero. Our own little mud hole was ranked the second most dangerous city in the state in 2015, based on property crime and violent crime per capita. This prestigious ranking came from neighnorhoodscout.com, which claimed Atascadero was the 28th most dangerous city in America. This ranking set off BS meters across the county, and prompted Atascadero officials to refute the claim. Apparently, 2014 crime statistics weren’t out yet when the website made this claim.

Last year the U.S. Department of Housing and Urban Development, HUD, ranked SLO the third worst town for homelessness in the country—large cities were counted separately. But with almost 2,000 homeless people in the county, and few resources for homeless people, SLO scored very poorly. Maybe it’s the nice weather that brings transient homeless people to the Central Coast, or the wine escapes. It’s almost certainly not the affordability. When Forbes called SLO one of the best cities for the housing recovery in 2009, they meant the best for homeowners, not home seekers. One theme that popped up again and again in lists, only to be brushed aside, was affordability. Sure, SLO’s the best place to live, if you can afford it.

Email Kylie Mendonca and tell her what SLO should be best known for at kmendonca@newtimesslo.com.