McCarthy's bartenders clean for a cause

Breakfast and a show, anyone? It’s about 11:30 a.m. on Saturday, April 7, when I pull my massive GMC truck into McCarthy’s parking lot, where half a dozen bartenders are holding a charity car wash for the Central Coast Autism Spectrum Center—all because they lost a bet with the Bull’s bartenders over who could sell more Muscular Dystrophy Association (MDA) shamrocks. Steel cage death match philanthropy! 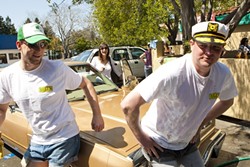 Anna and I have our Bloody Marys in front of us (that’s the breakfast), and we’re watching the McCarthy’s crew camp it up in their outfits and scrub down some dirty cars (that’s the show).

“I heard Bull’s cheated,” I say to Colin, who replies, “Yeah, they had a corporate sponsor and a ringer, but we don’t welch on bets.”

Then the Bee Gees’ “Staying Alive” comes blasting out of the bar, and De Ann gives us all a little dance. Soon Megan is working on my truck, and New Times photographer Steve E. Miller says, “They should really have someone on the corner twirling a sign,” and then looks at Megan and adds, “and if she was on the corner this place would be packed in a minute.”

I can’t read minds, but I’m pretty sure Miller is trying to will the knot on Megan’s scarf top to come undone.

Now Rose Royce’s “Car Wash” comes on the turned-up-to-11 jukebox, and Megan starts rinsing off my truck. Meanwhile, a steady stream of parents and children parade by, parents gawking while covering their children’s eyes. I guess nobody thought about the Jack House Easter
Egg Hunt! Huzzah!

Now Megan and De Ann are drying my truck, and De Ann says, “I’m the bottom part, and she’s the top part.”

“You like to be on the bottom, don’t you?” quips Miller.

Then my old English professor Mike Wenzl pulls into the lot, and as he’s maneuvering into a spot, he accidentally taps Stephanie’s car.

Then Chad comes over and I say, “Say something funny.”

“What does your shirt say?” asks Anna.

“Chick magnet,” replies Chad, pointing to a cartoon drawing of a baby chicken and a magnet.

No quotes, my ass.

Then Miller says, “Rub it slow, De Ann,” and De Ann says, “Yeah, maybe it will turn into something.”

Then “Macho Man” by the Village People comes on, and cars get washed, and the sexual innuendos keep flying, and when it’s all said and done, the McCarthy’s team collects $515 for the Central Coast Autism Spectrum Center, and the bartenders behind the bar add in $100 of their tips for a total of $615.

I have a clean truck, a Bloody Mary in my belly, and some misty watercolor memories of some real American heroes … in really short shorts.