June 20, 2013
comment
Have you ever left your iPod in your pants pocket, and remembered it after you’ve already run the wash cycle? Or, were you out having a good time until you realized that that’s your phone at the bottom of the pitcher of beer or pool? Well, don’t fret just yet! Scott Talmage has a dry service for you! 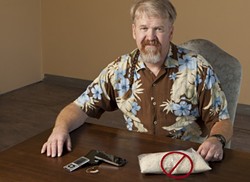 In April 2012, Scott Talmage made his idea official when he was issued his business license for C & E DryServ (Cellular & e-device Drying Service). His idea sprouted from an incident just like the ones above. Talmage was working for a biotech company that made chemical reagents for the medical field when his co-worker dropped her cell phone into the dishwasher and ran the cycle. By the time she realized it, she figured it was too late, but Talmage presented the idea of putting it into the drying machine the company had, just to see if it would work.

They left the phone for two days and when they came back and turned it on, it fired up with no problems and has worked ever since.

What about the age-old tale of simply putting your phone into rice? After all, it’s free if you already have rice at home, right? Well, here’s where Talmage begs to differ, and wants to put that tired rumor to rest.

Take a bag of rice and dump it all out. At the bottom of the bag you will find quite a bit of dust. Dust mixed with liquid will create a paste that will begin to corrode the inside of your phone. Sure it may seem to work the first time you tried the phone-in-rice theory, but now that device has a build-up that cannot be reversed. Also, rice does not get into the nooks and crannies of an electronic device and pull out the excess liquid. Talmage’s machine, however, will.

As for the process itself, it only takes 20 hours and costs $40. If your device does not work once it’s done, there is no charge. Talmage has fixed phones, iPods, mp3 players, and hearing aids, and out of all the devices he’s processed, only nine did not work afterward. And those nine were all put in rice beforehand.

He did admit that iPhones are a little trickier. He learned this when he processed an iPhone that went through the washing machine. The screen would not light up but all the data was saved and the customer was able to transfer everything onto his new iPhone.

Talmage has not had the opportunity to process laptops, tablets, or e-readers, but the machine is big enough for them and he doesn’t see why a tablet or e-reader wouldn’t work out the same.

Talmage has high hopes for his services. It’s just a matter of getting the word out. He’s even presented his services to the Sheriff’s department which will keep his information in their resource file. And he wants to take it nationwide and have a flat service fee to ship items.

So if you ever find yourself fishing your cell phone out of a bar bathroom toilet at 1 a.m., here’s a few tips for those wee morning hours: Do not attempt to dry the phone yourself, keep it wet and sealed in a ziplock baggie, remove the SIM card if it has one, and do not place it in rice. If you’re out of town when this unfortunate occurrence took place, don’t fret: Talmage has had a few phones come to him after a weekend away and they work just fine. But be sure to try and contact him beforehand as every phone is different. He can be reached through any of the following: 215-3810, candedryserv.com, mywetphone.com, mywetipod.com, mywethearingaids.com, or facebook.com/CEDryServ.

On Saturday, July 20 from 11 a.m. to 4 p.m., the Global Alliance for Balance and Healing will be offering free energy balancing sessions at the Sierra Vista Regional Medical Center in the auditorium at 1010 Murray Ave.in SLO. For more information call 438-4347 or visit globalalliance.ws.