We've got the English Beat

Don a dorky sweater for this holiday party

As the holidays draw near and students finish their finals and head home, the local music scene takes a bit of a break, too. It’s slim pickings for concertgoers over the next week, but if you need to escape from family or just want to shake that holly jolly butt upon the dance floor, there are still a few options out there—and some are pretty phenomenal. 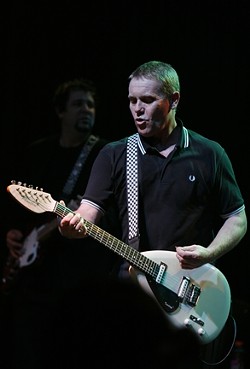 The biggest bash of the week has got to be the ugly sweater party held Friday, Dec. 23, at 8 p.m. at SLO Brewing Co. with musical act The English Beat. The band combines synthesized pop rock with island rhythms, and they had a huge influence on new wave music in the ’80s. They’re considered pioneers of ska revival in the same category as The Police. In their heyday, they released a slew of chart toppers, including “Save it for Later,” “Rough Rider,” and “Mirror in the Bathroom,” a danceable, sax-heavy tune about self-obsession.

The band has often supported radical causes like nuclear disarmament, infusing their music with themes of activism, love, and unity. Still, the band is more about good times than talking points.

“It’s better to suggest ideas than soapbox with your music,” lead singer and songwriter Dave Wakeling told New Times. “Everyone’s got different views, but we’re all in this shit together. Once you establish that, you can forget the bad for a while and have fun.”

After a quick rise to fame and three albums, the band broke up for several years. Some members went on to form the Fine Young Cannibals, while Wakeling founded General Public (both were hugely successful, if you weren’t aware). When those bands ran their respective courses, many of the Beat’s founding members got back together.

Wakeling still writes and records new material, but nowadays his main focus is delivering energetic live shows. It’s not uncommon to see old fans dancing side by side with fresh-faced young folk at their concerts, and that’s Wakeling’s favorite part of being a musician.

“Music is one of the few things that lets you really experience the moment,” he said.

Though they began as a British band, The English Beat now calls California home, and they’ve played several shows in SLO. Wakeling said the idea to make this concert an ugly sweater party stemmed from his impression that ours is a particularly festive town keen on traditions (and drinking). In fact, he’s developed his own unique (and disgusting) ritual whenever he plays in the area. He said he always borrows a piece of gum off the walls of Bubble Gum Alley, chews it while onstage, and puts it back after the show. Yum! He’s got no time to worry about germs. After all, that’s what white blood cells are for.

But don’t let a little already-been-chewed gum stop you from dressing in the cheesiest Christmas sweater you can find and having a good time with some ska legends on Friday night. When everyone’s dressed like a bunch of dorks, any cool pretenses can make way for goofy good times. Tickets cost $21 in advance or $23 at the door.

Santa Margarita’s native daughter, Jade Jackson, returns home from college for winter break, and she’s kind enough to headline a show at The Porch, located at 22322 El Camino Real in Santa Margarita, on Thursday, Dec. 22. The young songwriting prodigy started playing local coffee shops and wineries at the tender age of 14 and has since opened for The Charlie Daniels Band, Phil Vassar, and The Devil Makes Three.

Her music can be sampled online at myspace.com/jadinejackson. In some songs, delicate arpeggios lend a soft and beautiful background to a surprisingly powerful voice. Others are more upbeat with a country twang, and they’re all heartfelt. Her lyrics offer an honest insight to life as a teenager in the small, agricultural town tucked in the hills between Atascadero and San Luis Obispo.

A few days later, Julian Temple will be the featured artist at the Tuesday, Dec. 27, showcase at Kreuzberg Café in downtown SLO. Temple describes his style as “bluesy-funky-jazzy-country-psychedelic-groovy-grunge.” The aggressive guitar work offers an interesting counterpoint to his subdued, almost whispered lyrical style. This San Francisco native is known for his “crazily acrobatic” live performances, and his music can be heard at juliantempleband.com.

Songwriters at Play concerts start at 6:30 p.m. with supporting songwriters playing four songs each and featured artists playing a 45-minute set. All ages are welcome, and there’s no cover charge.

Holy smokes! A quick sample of some music by the Strata-tones reveals a sound straight from the dimly lit bars of the 1950s Chicago blues scene. These are clearly musicians on a mission from God. That mission? Have a kick-ass time on Earth, and enjoy every minute of it. 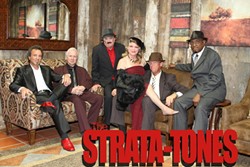 The guitar adds some funky flare, and the bass pounds steadily, like a headboard against the wall of some seedy motel room, while Ms. Valerie Johnson belts out lyrics that don’t shy away from their sexual subtext. Wait. Subtext isn’t the right word. What do you call it when the singer doesn’t even try to pretend she’s not singing about keeping her man happy with her “milk and honey lips?” Unabashed? Overt? Honest?

Either way, the music is great. It strums a certain chord everyone can relate to, and it can be heard Friday, Dec. 23, as The Strata-tones headline a Christmas party at The Pour House in Paso Robles. It starts at 8:30 p.m., with Al B Blue and Karen Tyler opening and Bill “Boogie King” Newell of the San Luis Obispo Blues Society emceeing the free event. If all the players of local blues scene are going to be there, maybe you should be there, too.

If you like the Ragu sauce, you’ll love Lucky Dub, an award-winning world beats band with a rock-steady reggae vibe. Founded in Washington, D.C., the band features musicians from both coasts of the United States, West Africa, Russia, South America, and the Caribbean. They play everything from funk to Latin jazz, as long as there’s room for some congo drumming and bouncing bass lines. 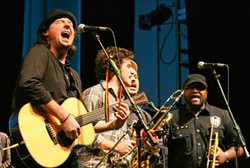 Their eclectic mix of musical influences was recently thrown back in the blender when DJ Dubmatix remixed tracks from their debut album, Mindset. The results are only available on their California tour, which kicks off in SLO.

According to their press release, “Most bands want you to come to their shows to buy their latest album, but in these tough economic times, we’re trying a different approach. We’re giving you the music first. Then you can decide if you like it enough to come to the show.”

Essentially, Lucky Dub set up a digital scavenger hunt. By scanning their concert fliers with smart phones, potential fans can find links to free downloads of their new tracks and remixes. You could also skip the search and head straight for luckydub.com, but where’s the fun in that? If you like what you hear, head to the Frog and Peach on Wednesday, Dec. 28, to catch the live show.

Piano man Jim Townsend is host to a musical Christmas party at SLO Down Pub in Arroyo Grande on Thursday, Dec. 22, starting at 7 p.m. The community celebration promises to draw guest musicians and tap into the season’s abundant cheer reservoirs for a night of musical merriment.

Head north to scope out the Central Coast’s newest bar and music venue, The Boar’s Hole in Paso Robles. It’s located at 1242 Parker St., and this rough and tumble country bar hosts Steve Sturgis and Roadhouse at 8 p.m. on Dec. 23. The band sounds just like its name would have you believe. Their music provides the perfect soundtrack to a group of bikers riding in flying V formation on the open road. It’s spot on, unapologetic rock n’ roll.

In Arroyo Grande, Gather Wine Bar is host to a slew of concerts in the days before Christmas. The Delmore Brothers perform Thursday, Dec. 22, followed by Karaj Lost Coast, with acoustic folk and positive vibes on Dec. 23, and Erin Teran on Dec. 24.

Between the saccharine celebrations of Christmas and the decadent parties of New Year’s Eve, it might be a good idea to sneak in something sophisticated with the ability to relax the body and rejuvenate the mind. A little jazz couldn’t hurt. The Mike Raynor Group performs Wednesday, Dec. 28, in the Fireplace Room at the Seaventure Inn, an oceanfront hotel in Pismo Beach that also features fine dining.

Do you like local rockers Double Shot? If so, you’re in luck. The band is practically living at Harry’s Night Club and Beach Bar over the holidays. They’re playing sets Dec. 24 at 2 p.m. and Dec. 26 to 28 at 9 p.m. At least they get Christmas off.

Or maybe you want a taste of lounge lizard crooning? Steve McCaan serves up some classic standards by the likes of Frank Sinatra, Tony Bennett, and Mel Torme on Dec. 23 and 26 at the Back Stage Pass Wine Bar in Cayucos starting at 5 p.m. both nights.

For something completely different, check out the experimental and endearing sounds of i hate you just kidding. The indie/folk, boy/girl duo from Costa Mesa specializes in poetic lyrics and dream-like compositions that are heavy on the reverb. They’re playing at Kreuzberg Café on Wednesday, Dec. 28 at 8 p.m.

Calendar Editor Nick Powell filled in for Glen Starkey to compile this week’s music section. He can be reached at npowell@newtimesslo.com.