For thrill seekers, curious tourists, and lethargic locals looking for something exciting to do on the Central Coast this summer, Sub-Sea Tours is giving you a reason to expand your holiday itinerary whale watching. 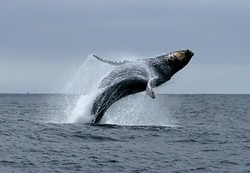 # Located in the quaint fishing town of Morro Bay, Sub-Sea Tours offers guests a chance to get an up-close view of whales particularly humpback whales that pass through the Central Coast from June to September.

The majestic humpback whale, an endangered species known for its stunning aerial performances and harmonious set of pipes, is quite the regular in these waters during the summer months and is known to get as close as the surf line along our local beaches.

For Kevin Battaglia, a life-long fisherman, and wife Rose Marie Battaglia, it was the beauty and wonder of these migrating giants of the sea that led them to offer tours to the public. Owners of Sub-Sea Tours since 2000, Kevin and Rose Marie, with the aid of son Mario and daughter Shawna Battaglia-Winfield, take passengers out every day on a three-hour tour between three and seven miles out to sea to catch a glimpse of the humpback whale.

"Around this time of year the humpback whale spends most of its time feeding on schools of anchovies and sardines not far off the coast," Shawna said. "On any given day we can expect to see anywhere from two to 20 whales."

According to Shawna, the humpbacks appear so regularly every day off the coast that there is 90 percent chance the tour will encounter at least a couple of whales. The humpbacks are easy to find because they travel at a slow, grazing pace and "spray" (breathe) every couple of minutes with a sound that can be heard for miles, Shawna said.

Once a humpback is located, often in schools of two or three, the boat rests idle, parallel to the whales so guests can catch a glimpse. Because the humpback is an endangered species the law says that boats cannot come within 100 meters of the whales, yet the law doesn't state that an idle vessel must depart once an inquisitive whale wanders too close to the ship, Kevin said.

"Though the humpbacks are really mellow creatures that tend to ignore the boat most of the time, sometimes they get curious," Kevin said. "We've had whales come right up alongside us and go under the boat just casually checking us out."

And though the humpbacks like to spend their time along our shores feeding rather than putting on performances, Shawna said that guests might just get lucky.

"We've seen a couple of the whales breach (an act that involves the whale nearly "jumping" out of the water) already this summer," Shawna said.

Sub-Sea Tours is offering whale watching tours every day at 10 a.m. from June to September. Guests are encouraged to schedule a tour in advance. Prices for the tour are $30 for adults, $25 for seniors, military, and students, and $20 for kids. Children 3 and under are free. Sub-Sea Tours is located at 699 Embarcadero St. in Morro Bay and can be reached at either 772-9463 or at their Web site, www.subsea.com.