Is that all there is to the misunderstood world of comics?

The great unused potential of the comic is baffling to me. Take the written word in all its nobility, beauty, and dexterity. Compound that with all of the visceral, emotional, and evocative qualities of the visual arts. Now put them in your transmogrifier and press the button. What you expect to get from the equation is something even grander—some kind of super-art!—but what tumbles out is just … comics. Childish picture-stories printed in flat colors on cheap newsprint.

Actually, though, that’s not quite right. Graphic novels and series such as The Walking Dead and Sin City tell powerful, gripping, adult stories. Author Marjane Satrapi chose comics as the medium to recount her memories of childhood in Iran during and after the Islamic Revolution.

Unfortunately, however, the only reason I even know that is because Satrapi’s Persepolis—just like The Walking Dead, Sin City, and many others—was later translated into the more readily accepted medium of film and television (note how Marvel’s multi-comic mashup The Avengers broke box office records with a reported $200.3 million opening weekend at the outset of May). Whether or not the general public will ever accept comics as a legitimate storytelling medium in its own right is anyone’s guess. For now, it remains largely the realm of specialists, known colloquially as “nerds” or “geeks.”

“Comics have a history of being an underground, do-it-yourself movement,” said Isaac Cates, a University of Vermont professor who teaches a course on the graphic novel. “Cartooning kind of flies under the radar.”

Because of its mixed nature, the medium doesn’t seem to fit neatly within the fields of literature or the visual arts.

That comics aren’t taken as seriously as literature, film, or theater means that while its creators may not enjoy the respect they deserve, they’re also free to be riskier, weirder, and more innovative in their storytelling.

Irene Flores is often categorized as a manga artist, as much of her work for Impact, Marvel, DC Comics, and the now-defunct publisher Tokyopop would suggest. But a quick glimpse into her portfolio reveals an uncanny ability to take on any style you please, from adorable, cartoony versions of the cast of Star Trek to loose, messy sketches of comic book heroes, to the sophisticated, pen-and-ink anime style she’s best known for.

The artist and graphic novel illustrator’s all-inclusive style may be the result of a childhood in the Philippines, where she was influenced equally by Asian and Western comics and cartoons.

That shows like ThunderCats and He-Man and She-Ra came from America, while the films of Hayao Miyazaki were Japanese, was of no consequence to her as a child, she says—until, at 13, Flores and her family left the Philippines for Lompoc, where Asian culture was considerably more scarce.

Of course, this wasn’t the only thing Flores would need to grow accustomed to. 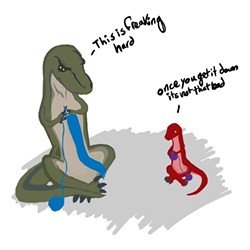 “School was a little weird,” she recalled, seated at her desk in her San Luis Obispo apartment. “I think maybe the other kids or the teachers might have been a little more understanding if we had had accents. We probably would have gotten a little more leeway, like, ‘Oh, they’re foreign; they just got to this country.’ But since we spoke English pretty well, there was always something just kind of off about us. We never really wore like the ‘right’ clothes when we started going to school. I didn’t know anybody ... . I started making friends because I could draw.”

After high school, Flores took art courses at Allan Hancock College and worked briefly as editorial assistant for the Lompoc Record. But her true passion was comic book illustration, something she eventually dropped both of those endeavors to pursue.

Mark of the Succubus, the first comic book series she illustrated, was published in 2005. Two more volumes followed, each of them requiring about a year to complete. Flores’ style subtly evolved, she said, the more she worked on the book, which told the story of a young succubus-in-training sent to the human realm to practice her skills of seduction.

(“But things get complicated,” the book’s synopsis reads, “when she sets her sights on Aiden, a smart but unmotivated student at her new high school. Meanwhile, the head succubus of the Demon World has sent a spy to make sure Maeve doesn’t step out of line.”)

“I love the idea of not dressing a woman in your comic book in jeans and a T-shirt like people do,” she said. “I kind of get upset with certain comic artists, especially guys, I gotta say, in the comic book industry, because they don’t tend to have a really good grasp on what people wear. I’m referring to costumes, too. I like drawing sexy ladies as much as the next artist, but why do you have to draw the spandex going under the boobs? That doesn’t happen. It looks really uncomfortable.”

Flores’ books are geared for artists who, like her, respond more readily to visual media.

“I’m a visual learner,” she explained. “You can tell me steps, but just show me and it’s way easier. It’s easier for me to get into something if there’s graphics. I feel kind of bad right now because …” she pauses. “I don’t read! It’s so bad. I read graphic novels, but actual books?”

But what is the difference, really? After all, both comics and straightforward literature require the active participation of the reader to extract a narrative from a few inky squiggles on paper. For that matter, what differentiates the graphic novel from comics? 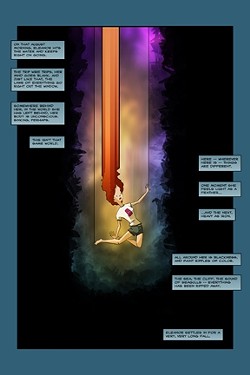 “I think maybe people started calling comic books ‘graphic novels’ just to give them that sense of legitimacy,” Flores said.

Comics, she went on, tend to be published as a series of shorter installments, while a graphic novel is often presented as a single book.

The University of Vermont’s Cates, however, sees the term as inaccurate, at best.

“You don’t want to hear your work described in terms of another medium,” he said. “We don’t call cameras ‘still-movie-makers.’

People who make graphic novels are more likely to refer to what they do as “cartooning,” he said, even if their work bears little resemblance to Cathy or Peanuts.

But while we’re delving into semantics, why not try to understand what defines a comic?

For most people working in the industry today, Scott McCloud’s Understanding Comics—a comic book about comic books—was a formative influence. Cates included this book in his syllabus for years, he said, until he found himself gradually disagreeing more and more with McCloud’s ideas on what comics are and how they work. (He’s even published an article expounding on McCloud’s logic in the International Journal of Comic Art.)

One of those disagreements was with McCloud’s liberal definition of the medium—“Juxtaposed pictorial and other images in deliberate sequence, intended to convey information and/or produce an aesthetic response in the viewer”—a definition that included Egyptian hieroglyphics, and possibly even cave paintings, but excluded The Family Circus.

Cates’ definition is narrower, placing the dawn of comics in 1901 or 1902, when they began appearing in newspapers.

“I don’t think anyone making comics in 1901 thought of those things as their forebears,” he said of McCloud’s examples of early comics.

“Any definition you write is going to leave something out,” he went on. “It’s not so much what your definition is, but what happens at the borders of your definition … . What does that tell me about how I read comics?”

McCloud’s emphasis on juxtaposition would have excluded some of the work of Cal Poly student Martin Knobel, who uses both sequential and single-panel drawings to tell a story—whether it’s one about domestically inclined dinosaurs or a man in a particularly air-headed disguise.

But Knobel’s webcomic Noties is unconcerned with the definition of comics. It’s more invested in making you laugh. There’s an easy likeability to his simply drawn characters and their absurd situations, which often involve mundane occurrences (bro sightings, for example) blown up to comic-book proportions (an accidental trip to the future, which turns out to be entirely ruled by evil bros). Another part of their appeal may lie in their ambiguity.

“You can’t tell whether these characters are kids or adults,” Knobel pointed out. And he seems to prefer it that way.

McCloud had a thing or two to say about ambiguity in comics as well: “When you look at a photo or a realistic drawing of a face, you see it as the face of another” he writes in Understanding Comics, “but when you enter the world of the cartoon, you see yourself. … The cartoon is a vacuum into which our identity and awareness are pulled; an empty shell that we inhabit which enables us to travel in another realm.

“We don’t just observe the cartoon,” he concludes triumphantly. “We become it!”

These words were still blowing my mind when I spoke with Cates, who had an entirely different take on simplicity in comics.

“If that were the case,” he argued, “then it would be smart for cartoonists to make their heroes simple and their enemies detailed.”

We don’t identify with characters because of how they’re drawn, he believes, but because of what they do.

“If all the ninja turtles did was sit around and complain, we would be less interested in them,” he said.

Arroyo Grande artist Jason Gurley began writing a novel 10 years ago. It was a real novel, full of only words. Its protagonist was a 14-year-old named Eleanor Witt, whom Gurley describes as “a girl who never stopped falling.” Then, in the beginning of 2011, he decided to rewrite the tale as a graphic novel.

Eleanor takes place in the small oceanside town of Anchor Bend, Ore. The story’s eponymous heroine is enjoying a carefree summer, rowing her boat out to the craggy Huffnagle island often to explore. But her happy existence is shattered at once by a terrible fall, which seems to plunge her into another dimension. Even as she seems to be recovering, the sickening memory of the fall resurfaces in dreams, and with it a disembodied voice whose owner seems able to hear her thoughts.

The writing of Eleanor, Gurley said, began as a way to challenge his Pentacostal upbringing.

“I found myself, by the time I started writing the book, really challenging what I had been taught as a child,” he explained. “Eleanor kind of started as a vehicle for me to question that. So I put her in the situation of trying to find out what is real. I found that writing as a 14-year-old girl required me to sort of look at my own scenario objectively.”

Gurley, like Flores, has little formal training in the art of the graphic novel, opting to learn as he works. Yet despite the fact that, as Gurley self-consciously points out, the story’s titular character is drawn a little differently on each page—evidence of an ongoing learning process—Eleanor is beautifully and lovingly illustrated. The story’s pacing is often slow and serene, its detailed images given ample room to breathe. It’s the antithesis of the whole superheroes-in-spandex thing.

In fact, Cates believes such intimate, soul-searching subject matter is far better suited to the comic book medium than stories featuring ninja warriors or superheroes soaring over futuristic skylines. Such larger-than-life spectacle belongs on the silver screen, he insists, where explosions can be big and booming and terrifyingly realistic, and heroes and villains can tower intimidatingly over their captive audience.

A comic book, by contrast, is a more private, individual experience, one that fits neatly in the hands or between the pages of one’s Algebra book. It’s as personal as a whispered secret, as intimate as the voice in Eleanor’s head.