The art of food and wine 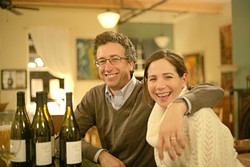 My wine expertise basically extends to the knowledge that it comes in two colors. I can also properly pronounce sommelier, though I have to admit I needed spell check to spell it correctly. 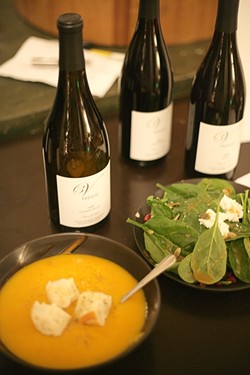 Then there are my foodie credentials, which can be summed up by my preferred diet: Foster’s double deckers, Chili Peppers’ chili Colorado burritos, and Papa John’s The Meats pizzas. Sending me to a winemaker’s dinner is like staging an opera for a wooden barstool. 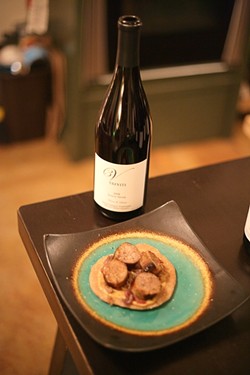 Still, I was determined to broaden my horizons … and my waistline. 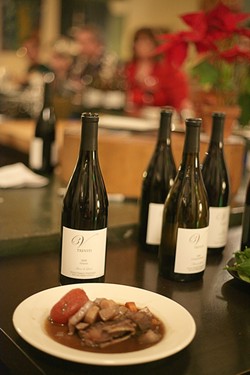 It smells amazing in here! 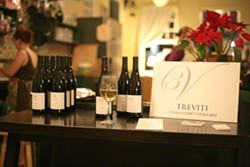 Soon the guests begin to arrive, having paid $50 for a three-tier tasting and six courses of gourmet food. Maria pours the first silver medal wine, a 2008 Chardonnay ($21) whose “nose” she describes as “creamy, with stone fruit and citrus,” and whose “mouth” she says is “medium bodied, with citrus notes of lemon and pink grapefruit,” and whose “finish” is “bright and spicy.” They only produced 100 cases! This stuff is rare!

“Even people who don’t like Chardonnay say they love this,” she adds. Anna has paired the wine with a spinach salad with dried cranberries, mild goat cheese, toasted pepitas, and a citrus vinaigrette, as well as a butternut squash soup with sage-seasoned croutons.

It tastes nothing like a cheeseburger and light beer. My mouth is extremely perplexed.

Then comes the next wine, the silver medaled 2008 Pinot Noir ($35; 75 cases produced), with a “fresh earth and sweet cranberry” nose, a “medium bodied, candied cranberry, and woody-essence” mouth, and a finish that really lingers, but not in a bad way like dinner guests who won’t leave. Anna serves homemade flatbread with caramelized onions, stone ground mustard, and apple sausage, which is incredible, but not quite as incredible as the pork tenderloin with a black cherry reduction sauce, which really brings out the cranberry notes of the pinot. Man, I am totally starting to get the hang of this. In fact, I notice my pinky is sticking up when I sip my wine, which I unconsciously begin to swirl in my glass more, looking at its “legs.” (OK, I overhear that from an attendee who knows what he’s talking about, but it made me sound fancy for a minute, didn’t it!)

This is a lot of food, and I’m totally full, but Maria is relentless and trots out the final wine of the evening, the 2008 Syrah ($26; 27 cases produced), with its dark plum color, fresh cranberry nose, medium bodied cranberry jam, and white pepper mouth, and lingering cranberry and pepper finish. Then out comes Anna with some braised lamb with bitter chocolate and rosemary roasted root vegetables, which is followed by ice cream covered in dark cherries and chocolate sauce. Holy guacamole, my mouth is threatening revolution unless I promised to upgrade my diet and beverage selection to its current level.

After the meal, the wine keeps flowing like the conversation, and my stomach and liver continue to make the case that I should treat them better. They may have a point.