See one man's quest to demystify the U.S.S. Montebello

In October, during the mission to assess the environmental threat of the U.S.S. Montebello, Cambrians could look out at night over a blackened sea and find it lit up by a lone salvage vessel positioned some 900 feet above the sunken ship’s skeletal remains. 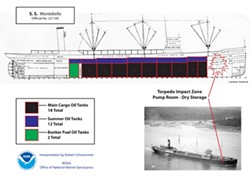 Now the mission is over; no threat was found. On the night of Dec. 2, roughly 60 Cambria residents gathered for a presentation by one of the Central Coast’s foremost experts on local shipwrecks. Robert Schwemmer was fresh off his stint on the Nanuq, the aforementioned salvage vessel, part of the team tasked with the mission of finding out whether the Montebello, a sunken World War II-era tanker, held a potential 3 million gallons of Santa Maria crude in her long-sunken belly.

Schwemmer—who looks sort of like a bearded Treat Williams, anxious to share a secret—is the West Coast regional maritime heritage coordinator for the Office of National Marine Sanctuaries, and has spent decades researching and conducting archeological investigations within the state’s federally protected sanctuaries, recording and mapping various shipwrecks up and down the California coast.

The Montebello has been on Schwemmer’s radar since the mid ’90s. He was one of the original crew aboard manned dives to the shipwreck in 1996, as well as subsequent efforts in 2003, and most recently as NOAA’s representative aboard the Nanuq. He was among the first to actually lay eyes upon the Montebello.

Schwemmer came out to Cambria on his own dime to tell the unique story of the tanker. Over the course of the last 15 years, Schwemmer’s research on the ship has taken him all over: to the archives of the California Oil Museum in Santa Paula, the former headquarters of Union Oil Company; to the Cambria Historical Museum; and to the homes of surviving crew members.

“Documenting this history of the Montebello has been a great journey—meeting the survivors and the people in the local community that still embrace a connection to their seafaring past,” he told New Times.

He collected images that would later prove handy: the original blueprints of the vessel; old photographs of her construction and maiden voyage; and photos of her interior, such as the deck and boiler room. There was no shortage of “oohs” and “ahs” when he showed the crowd images from the time, such as original Art Deco-style ads for Union Oil from the 1920s; and a U.S.-funded wartime promotion of Jane Russell posing in an explosion hole left by a torpedo in another vessel, under a banner reading “Loose lips sink ships.” He also brought a photo of one of the few artifacts from the ship on land, an 18-foot long oar branded with “U.S.S. Montebello,” now on display at the Cambria History Museum.

There were other rarities, such as an article that ran in the Cambrian of the Telegram-Tribune.

The article tells of townspeople gathering on the beach to pull the crew to safety, treating them to food and coffee in town, and finally taking them to Camp Roberts for debriefing.

The wreck was actually discovered and photographed in 1946. After roughly 100 attempts at sinking a primitive underwater camera around where the Montebello was thought to be, photographer John Ewing, under contract with the U.S. War Damage Corps, captured the first known image of the vessel.

Schwemmer also discussed his many conversations with the last surviving member of the Montebello’s crew, Richard Quincy, now 92 and living in the Bay Area. He said Quincy remembered how he was called a liar when he told of the Japanese attack right off the Californian coast.

The reality, however, uncovered in Schwemmer’s research, is that the Montebello was actually one of 10 American merchant vessels attacked by the Japanese off the West Coast during World War II. Of those attacked, six were sunk. Lives were lost, but the federal government was still successful in keeping the attacks obscured from public view.

Schwemmer also presented his own photos taken during his excursions out to the Montebello. He recounted to a New Times reporter his amazement while hovering over the ship’s bridge—the very spot Quincy stood when he spotted the Japanese submarine—in a 2003 trip to the wreckage in a two-man Delta submersible.

From the October Montebello assessment, Schwemmer showed never-before-seen images taken aboard the Nanuq. His images included the vessel’s control room, close-ups of the remote-operated vehicle, the deck crane, the neutron back-scatter (which detects what’s on the other side of the hull without drilling), as well as the drilling equipment used to bore holes into the Montebello’s hull.

Of course, the question on everyone’s mind was “What happened to the oil?”

An older gentleman in a newsboy cap and a Members Only jacket tapped the shoulder of the reporter sitting next to him. “You know,” he said with a coy smile, “I know why there was no oil in it.”

He identified himself as John Elps of Cambria, and told a story about his brother who was stationed aboard the U.S.S. Crosby in San Pedro in the months following the Montebello’s demise and claimed seeing an abnormally high number of oil blobs in the water and tarballs ashore, though he didn’t know what to make of it then.

Schwemmer has his suspicions. During a previous dive, photos revealed that two deck vents likely connected to the ship’s boiler room were wide open.

Since the assessment, some conspiracy-leaning residents have questioned whether there ever was any oil. Schwemmer doesn’t buy that suspicion. For one, Quincy saw the cargo being pumped aboard, a task that took about a day. Second, the attack on Pearl Harbor had taken place two weeks prior; the country needed no other excuse to enter into the war.

Instead, the oil likely leaked shortly after the attack and throughout the decades, seeping out and dispersing southward, he said.

More facts will seep out in the coming months. Sediment samples taken from the seafloor around the wreckage are currently being compared to samples taken over the years along the California coast.

But the story of the Montebello is not over. The next step, Schwemmer said, is to get the federal government to recognize the Montebello site in its National Register of Historic Places, preferably by 2016 for the 75th anniversary of its sinking. That would qualify the site for federal grants devoted to cultural places officially deemed worth preserving.

“The history of the Montebello is still deeply rooted in the communities of Cambria, Cayucos, and Morro Bay,” Schwemmer said. “For these citizens took heroic action to launch a sea and land rescue for the Montebello’s crew.”