What lurks beneath: PG&E and water board reach draft settlement over water flushed back into ocean from Diablo Canyon Power Plant

File Photo By Henry Bruington TEMPERATURE DEBATE Using seawater to cool Diablo Canyon Power Plant's system, the water that PG&E discharges back into Diablo Cove can be 22 degrees warmer than the ocean water.

Editor's note: This article was edited to include more information clarifying the recipient of the proposed settlement funds.

PG&E has agreed to pay $5.9 million to a local nonprofit as part of a tentative settlement between the company and water regulators that resolves a long-running investigation into Diablo Canyon Power Plant and its cooling system's impact on the marine environment.

The draft settlement, announced on Dec. 7, is the result of more than 20 years of investigation and monitoring at the nuclear power plant site. Officials say that Diablo's "once-through cooling system"—which functions by continuously sucking seawater into the plant to condense steam and then flushing it back into the ocean at a warmer temperature—has caused a "degradation of the marine habitat" that violated its permits.

Pending public comment and court approval, the settlement will be paid to the Bay Foundation of Morro Bay—the parent nonprofit of the Morro Bay National Estuary Program and three other environmental programs—to fund future projects that will "benefit water quality and the environment on the Central Coast," according to a copy of the settlement. Specifically, the settlement benefits the Central Coast Ambient Monitoring Program for Groundwater Assessment and Protection, which implements projects to monitor and protect groundwater.

PG&E and the Central Coast Regional Water Quality Control Board's agreement honed in on the impacts of the plant's outfall in Diablo Cove. Over time, the warmer water pumped into the cove disrupted the nearby marine habitat—displacing some species like bull kelp and attracting other species native to warmer waters south of the Central Coast, among other alleged impacts.

These effects were tracked and documented for years, both environmental watchdogs and PG&E told New Times, with studies showing continued but relatively unchanging impacts.

"They've been monitoring not just water temperature, but the different species in the water," said Lexie Bell, executive director of the Morro Bay National Estuary Program. "If the discharge causes the temperature of the ocean to go up in that small zone where the outfall is, that can change what species are able to grow in that area. If some of the kelps are affected and less able to grow, it can disrupt the community of species."

Despite agreeing to the settlement, PG&E maintained that it believes Diablo's discharge "fully complies with its permits"—noting that the outgoing water never exceeded its required temperature limit of 22 degrees above the natural water temperature.

"The effects of thermal discharges from the plant have been monitored since the plant began operation in 1984," PG&E spokesperson Suzanne Hosn told New Times. "As in any dynamic marine environment, there are some changes within the cove, as it is affected not only by the discharge but through natural phenomena such as El Niño and winter storm events."

The settlement puts to bed a process that began decades ago, according to Thea Tryon, assistant executive officer at the Central Coast Regional Water Quality Control Board.

In 2003, regulators put forward a similar settlement to address the impacts of both Diablo's intake and discharge systems. But at the time, the water board tabled it. In 2015, the state adopted a new fee system to mitigate intake impacts, which include entrainment—as power plants pull seawater into their cooling systems, plankton, fish, and other organisms are killed in the process.

PG&E is expected to pay about $38 million in intake fees for Diablo Canyon between 2015 and 2025 (the year that the plant is slated to shut down), which will go toward benefitting marine protected areas on the Central Coast. 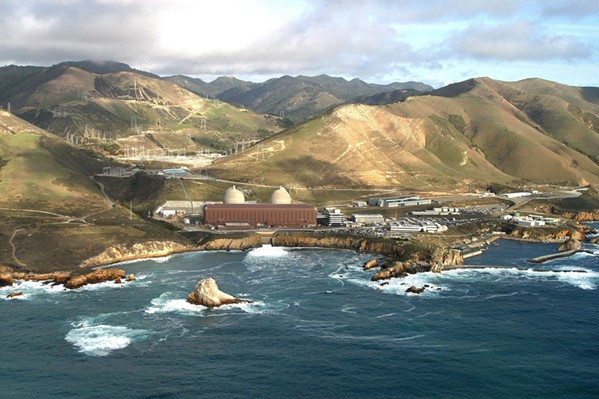 For years, the water board also explored other methods to curb or eliminate the impacts of the cooling system—but those options proved too costly or environmentally disruptive on their own, according to board reports. The Dec. 7 settlement serves as the resolution to that prolonged investigation.

"This settlement before us is actually from the 2003 settlement that never got finalized," Tryon said. "It was determined there was really no technical way of not having the thermal discharge."

While Diablo watchdog groups like SLO Mothers for Peace did not return a New Times request for comment before press time, in 2003, they bashed the board's proposed settlement with PG&E.

"The current settlement does nothing to address or abate the ongoing thermal discharges from Diablo Canyon," read a 2003 letter co-signed by Mothers for Peace and the Nuclear Information and Resource Service. "[It] is an abdication of the board's responsibilities to protect water resources and marine life from the indisputable ongoing and growing damage from the generators' condenser cooling system."

If approved, the Central Coast Regional Water Quality Control Board will determine which projects the $5.9 million held by the Bay Foundation of Morro Bay will support. Public comments on the settlement can be submitted via email to thea.tryon@waterboards.ca.gov through Jan. 8. Δ