What the 'New' means in New Times

That cover story, penned by Coleen Bondy, was written under pressure from New Times publisher and editor Steve Moss.

Steve often pressed us to write against our own political views, to consider the opposition perspective, to write from the side that made us uncomfortable, even angry.

Steve might have done that because he was a Republican, and his newsroom staff at the time leaned left, pro-environment, pro-choice. That’s how I interpreted the pressure at the time. And in a heated exchange on the morning of the Planned Parenthood fire, I told him as much.

Back then the New Times offices were on Santa Rosa Street, and the Planned Parenthood clinic was next door. We stood in the parking lot while firemen doused the ashes, the acrid smell of smoke hanging in the air.

“We emboldened them,” I argued.

“We didn’t embolden them,” he shot back, snapping the word like a twig.

But even as I resisted Steve, I also began resisting my own political bias. Because deep down I knew Steve was right about one thing:

Journalists should be independent—not only of government interference, not only of advertiser influence, but also of partisan ideology. 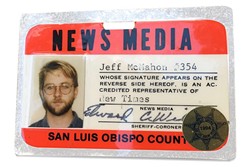 We should be independent of partisan ideology not because of some moral precept—thou shalt not—but because it damages journalism itself.

In 1995 Steve saw what I hadn’t yet: that ideology has blind spots. I’ve since learned that’s really what ideology is for: It papers over inconsistencies and gaps in a systemic view of the world.

Frederick Engels linked ideology to “false consciousness.” Louis Althusser called it an “imaginary relationship.” All ideologies are incomplete, all partially wrong, because no system of ideas conceived by humans can fully organize the phantasmagoria of sensory experience that confronts us. But ideology pretends to be complete and pretends to be right.

When we write within the confines of a political ideology, we stop seeing the world in its variety. We see it through the narrow lens of our own beliefs. And we end up writing only for those who share those beliefs.

The alternative press flourished amid the anti-war protests of the 1960s, speaking for a revolution unserved by the mainstream press. A lot of its writers cherished—still cherish—those revolutionary ideals. We relished the opportunity to indulge them when we joined alternative weeklies.

“No more writing for The Man!” we thought as we pranced into alternative newsrooms.

Steve quashed that party at New Times. Not that he censored us—he was usually tolerant of our biases—but he brought The Man into our editorial meetings and asked us to consider his perspective. Look at The Man, Steve was saying. The Man’s not so bad.

That was the new in New Times.

Today, looking across the smoldering ruins of the alternative press, it’s easy to see that the big-city lefties fared worse than smaller independents like New Times. That’s partly a function of market differences, but it didn’t help that partisan papers had limited their readership before the collapse.

A similar recoil is happening on the right. While Steve and I were arguing on that smoky morning, someone driving down Santa Rosa was undoubtedly listening to Rush Limbaugh on a car radio.

The next year, Rupert Murdoch and Roger Ailes would found Fox News. Fox would prove you can build a huge audience on partisan ideology, you can even become No. 1, but you can’t keep that whole house of cards from collapsing.

Partisans may feel comfortable inside echo chambers, where challenging views are never seriously considered, only refuted, but the echoes amplify the blind spots, fomenting a pernicious ignorance that ultimately dooms the cause.

In the most recent election cycle, fake news sites have taken the trend further, mining specific ideologies for clicks, preying especially on Berners and Tea Partiers. These sites distort or invent stories to take advantage of confirmation bias, collecting clicks like a fountain of dimes.

When alerted to false stories, the readers who share them often don’t care that they’re false. They seem “truer than true” because they correspond to the readers’ beliefs, which are increasingly informed by fake news.

Soon each camp has its unique and unassailable truth, each of them false.

Writers can confront this problem by writing across audiences. That’s all Steve wanted: to keep New Times open to the most readers.

It makes practical sense. If we write about the imperiled earth, for example, we ought to write for the many who are wrecking it, not just for the few already trying to save it (though they too need to be reminded to lay off the gasoline, the air-conditioning, the meat).

Traditionally American writers have attempted to cross divides by feigning objectivity, but that’s another house of cards. The alternative press exposed objectivity as a pretense and urged its writers, instead, to be honest about our biases.

“Sensitivity in its highest form is intelligence,” said the philosopher Jiddhu Krishnamurti. And “it does not come from books.”

When we step out of ideology, into freedom, we can teach and we can learn again, and we can do good in the world.

“All ideologies are idiotic,” said Krishnamurti, “whether religious or political, for it is conceptual thinking, the conceptual word, which has so unfortunately divided man.”

I don’t know how much Steve Moss cared about philosophy on that smoky morning in 1995. Steve was mostly a mystery. But through thornier thickets than he yet knew, he pointed the way.

Jeff McMahon wrote for New Times from 1994 to 2000. He teaches journalism at the University of Chicago and covers the environment and energy for Forbes.

This story ran on Feb. 8, 1995, the week prior to the fire that gutted San Luis Obispo’s Planned Parenthood. Here are some excerpts:

Outside the modern, white stucco building that houses the Los Osos Christian Fellowship Church, palm trees waved above a parking lot crammed with the cars of Sunday worshipers.

Inside the church, Jim Coles was about to present the “Sanctity of Life” program, complete with a five-minute film showing the bloody, dismembered bodies of aborted fetuses.

“Today is the anniversary of Roe v. Wade, a tragic decision that we’ve suffered for ever since,” he said.

Nash told the crowd that church leaders had agonized over the decision to let Coles present the pro-life program, including the gruesome film, during a Sunday church service.

“There are certain aspects of following Jesus that are not comfortable,” he told his followers. “We’d rather not have [the program], to be honest.”

Nash then sent children in the eighth grade and below into another room, where they would watch a film about the growth of a baby in its mother’s womb. …

… Coles spends most of his spare time trying to get people to acknowledge that a fetus is a human life—even if they don’t believe in souls or God.

“I want to challenge those who consider themselves pro-choice to put themselves in the shoes of the baby, so to speak.”

His best argument, he said, is won by starting with birth instead of conception. He does it by asking someone if a baby is human an hour before it is born.

“If I can get someone all the way back before the sixth week, I’ve made them pro-life. And they don’t even know it,” he declared. …

The full versions of these two stories were printed a week after the Planned Parenthood fire, on Feb. 22, 1995.

Carlyn Christianson surveyed the torched Planned Parenthood clinic she’d run for the past five and a half years in San Luis Obispo.

She pointed to an examination table with metal foot stirrups attached to its end, in a room with a charred number “3” on one door.

“That’s a hydraulic table. It’s very heavy,” Christianson told the moving man. “Everything’s got to go out that back door. The floor in the front is not too stable.”

In rooms where doors had been closed, the damage was limited to the effects of smoke, heat, and the water used to fight the fire. But the front rooms of the clinic told a different story.

The waiting room had once been decorated in pastel shades with cheerful white wicker furniture. On Friday, Feb. 17, two days after an arson fire destroyed most of the clinic, the room was a blackened mess. …

… In the wake of the early-morning Feb. 15 fire, fingers of blame have pointed at pro-lifers, pro-choicers, and even New Times.

Pro-choice activists condemned the pro-life movement for using terrorism to keep women from having abortions.

Central Coast pro-life groups also condemned violence against abortion clinics via press releases and phone calls to the media. But several of them suggested the pro-choice camp may have been responsible for the fire.

“Planned Parenthood and abortion clinics kill,” said Mary Alice Altorfer, a volunteer with Santa Maria Right to Life. “If they can kill, they can lie, and they can set a fire.”

Christianson said that assertion is ludicrous. She questioned why the media would even report it.

“Is that responsible reporting? I think the media needs to ask itself that question. Obviously those types of statements are absurd.” …

The word traveled like a flame torched to gasoline—another clinic had burned.

Pro-choice activists across California knew what happened to San Luis Obispo’s Planned Parenthood before the ashes had cooled. Few reacted with surprise and when they heard “San Luis Obispo,” their minds rewound to last July.

Protesters crowded the sidewalks on both sides of Santa Rose Street that warm morning last summer. They held signs aloft with pictures of fetuses or carefully painted slogans—“Stop the Baby Killers.”

One man lurched into traffic and yelled at passing cars, waving his sign as they passed.

The protest lasted two hours at most.

“San Luis Obispo was visited by Operation Rescue last summer on their caravan. We were there. SLO was the first place we picked them up,” said Tom Burghardt, perhaps the pro-choice movement’s leading expert on anti-abortionists. …

… “I think it’s not coincidental that we’ve had four arsons since the month began,” agreed Barbara Ellis of the Strong Link Coalition, a group that provides protection to doctors and clinic staff. “Three of the four fires occurred along the route of that caravan last summer.”

The Modesto Planned Parenthood burned Feb. 1 after an arson fire started in an adjacent building. On Feb. 9 an arsonist placed a tire doused with gasoline against the door of the Family Planning Associates clinic in Ventura, causing $1,000 in damage. On Feb. 10, a burning tire damaged the Physicians’ Medical Laboratory in Santa Barbara. Police believe the tire was meant for the nearby Santa Barbara Women’s Medical Group, which provides abortions. Fire gutted San Luis Obispo’s Planned Parenthood Feb. 15.

Federal investigators have confirmed arson in each case, but they have named no suspects and drawn no connection between the fires. “We’re really outraged that nobody seems to be showing that this is a conspiracy,” Ellis said. “There are similarities. It’s not every day that you find a tire and gasoline at two different clinics that perform abortions or refer for abortions.” …