What, who, and why is Galumpha?

To galumph—a verb coined by Lewis Carroll—is defined as “to leap or move about clumsily or joyfully,” though this may be too modest a description to contain the likes of Galumpha, the troupe of muscled, comical dancer-acrobats whose bodies move like the strange progeny of a ballerina and an amphibian. 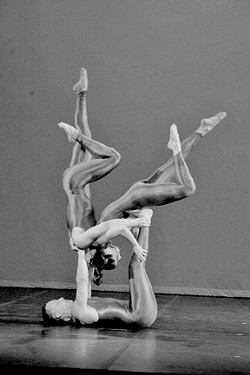 Founded in 2002 by Andy Horowitz and Greg O’Brien, Galumpha’s repertoire has become known for daring choreography, intriguing silhouettes, and feats of intense, concentrated strength. In a piece called “Human Fly,” three dancers stack and sculpt their bodies into unmistakable insect shapes. Performers in what appear to be Velcro helmets exchange plush balls with their heads in a piece called—what else?—“Velcro.” Two male dancers form a writhing teeter-totter in “The Much,” before a female dancer sits delicately in the center. And in “Jablkon 1,” they lie head-to-foot on the floor, linking themselves together and undulating elegantly across the stage like some underwater creature.

“We galumph when we hop instead of walk, when we take the scenic route instead of the efficient one, when we play a game whose rules demand a limitation of our powers, when we are interested in means rather than in ends,” the group’s website explains, quoting Stephen Nachmanovitch’s Free Play—Improvisation in Life and Art.

“We voluntarily create obstacles in our path and then enjoy overcoming them. In the higher animals and in people, it is of supreme evolutionary value.”