Complete with a 'funicular,' one plan for the new Avila seeks healing and more hotels

That fact alone may strike some as a sure sign that the new Avila exists not for the roughly 160 residents, but for the tourists who come en masse during the summer months. 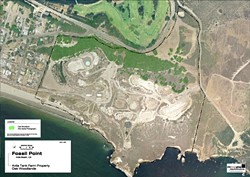 When it was discovered in the late '80s that more than 400,000 gallons of crude oil had leaked into the town, the beach, and all over the site of a former Unocal oil storage site and pump station, the town was literally ripped apart, and the soil below old homes and businesses was excavated and replaced with clean dirt. Before the spill, residents of the beach town numbered around 500.

Avila has been in the rebuilding stage ever since that excavation work was completed in 2000. Now, a discussion about what should be done with the former Unocal site is being used as the basis for a plan backed with public relations muscle.

According to that plan, it turns out what Avila really needs now is healing. And hotels. And a "funicular."

Long after the removal of the Fossil Point tank farm, Chevron, (formerly Unocal) still owns a substantial amount of property in the unincorporated town: 95 acres roughly in the shape of Texas, all on the surrounding bluffs. Last year, Chevron hired local developer Rob Rossi to develop a site plan, and, after several meetings with the public, a group of citizens working closely with Rossi has come up with a concept plan that would more than double the area of Avila Beach.

Though there's no official project to speak of yet, there's already a public relations campaign underway surrounding the group's multi-faceted vision.

The push includes the Avila Fossil Point website, which offers a history of the area, photos of Avila during the oil industry's glory years, aerial images, and information about contamination of the site.

There's also a brochure highlighting possibilities for future development--the "Avila Tank Farm Project: a place for healing." According to this brochure's history, "the site was said to be known by the Chumash as Indian Head point."

Pete Kelley, an Avila restaurateur for more than 30 years, is an amateur historian who has worked closely with the SLO and South County Historical societies. He said that while the Spanish probably used that moniker, it's not likely that the Native Americans themselves referred to the point as "Indian Head."

The public process began with a series of meetings led by County Supervisor Jerry Lenthall, who later said the effort was a sort of pre-emptive strike--he sought public input as soon as Chevron hired Rossi. Between 40 and 100 people attended these meetings, but when they wrapped up, some Avila residents felt that it was all for show. SLO City Councilmember Christine Mulholland even went on record calling the meetings "a sham," and the Tribune criticized Lenthall in an opinion piece for wasting the participants' time, in part because residents didn't get a chance to vote on possible uses for the land.

Kelley said that during the final meeting, he tried to get a vote on record by asking participants to indicate their preferences for the site by a show of hands. According to Kelly, more than half of the people preferred open space.

The Avila Valley Advisory Committee (AVAC)--something like a city council for the unincorporated area--followed up with its own meeting, and they did hold a vote.

On Oct. 8 in 2007, AVAC released the results of their poll and, a month later, the "place for healing" brochure was finished.

The brochure, which is available at the Fossil Point website (www.avilafossilpoint.com), proposes a draft concept site plan that lays out several community features, including 200 new "community" parking spaces to complement 200 hotel units broken up into "lodges," "cottages," and other tourist dwellings a restaurant that will seat 200 people a cafe serving "indigenous foods" and a set of 24 "workforce bungalows."

The brochure's vision also includes a wellness center (not voted on by AVAC) native and botanical research gardens (1.4 percent voted for a greenhouse) community amphitheatre (no vote) a Chumash cultural center (15 percent voted in favor, making it one of the more popular ideas) a spiritual outlook (which seems to be a lookout point) and the "funicular," which no one voted on, but one person did suggest. The plan does include 55 acres of open space along the bluffs, with limited access.

The main author for the brochure is Julie Andrews-Scott, who has lived in Avila for more than a decade and started the Avila Fish and Farmers Market. She is part of a core group, led by Lisa Newton (who didn't return repeated calls), representing the community and working with Rossi on the project.

She said that the hotel and parking estimates came from Rossi, who came up with the numbers in order to conduct a traffic study. Traffic flow is one of several major issues that will have to be addressed before anything can be built. Rossi, however, doesn't claim the brochure or its vision as his own. Neither does Chevron.

Rossi did commend Andrews-Scott's group, saying that they've been sincere in trying to develop a plan that works with Avila, but he stressed that he's not sure what will be implemented in the end.

Bill Almas is Chevron's project manager for Fossil Point. He questioned the basic assumption that a hotel was planned for the development. Almas said that Chevron has planned to develop the site for some time, and should have a plan ready to be reviewed for California Environmental Quality Act compliance by the end of the year. But he said that he doesn't know what the project will look like yet.

"I want you to be careful," he said of the design in the brochure. "It's [the community group's] project. It's not necessarily what we're going to do."

As for any lingering unrest over how the meetings were held or who got to vote on what, Almas doesn't see how anyone could ultimately be unhappy with the process.

"Most projects wouldn't have even had public comment at this stage," he said.

Neither Rossi nor Chevron has submitted any plans to the state, county, Coastal Commission, or any other governing body for review. Also, building on the site would require serious efforts to address pollution from the old site of the tanks, and major restrictions because it's coastal land.

"It has a long way to go before it becomes an approved project," Almas said, noting that there will be many more opportunities for community review.

"Whatever we end up doing," Chevron's representative continued, "it will be protective of both human health and the environment. That's a given."

For the record, a funicular is a sort of cliff-climbing railway. This one's slated to go through an oak woodland.