'What would Roger do?'

His teethmarks are all over the 300-mile-long region—at least metaphorically. Water watchdog Roger Briggs has fought ferociously during his decades-long tenure with the Central Coast Regional Water Quality Control Board to enforce clean water laws and require polluters to clean up and pay up. 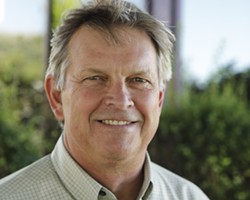 “Roger has set the bar so high for us to find a replacement. He’s one of a kind,” the water board’s vice-chair, Russell Jeffries, said at a recent meeting.

Board members have been interviewing for a new executive officer, with another closed-door session set for Aug. 9, the day of this printing. Ken Harris, assistant deputy director of the Division of Water Quality at the State Water Resources Control Board, has been named interim executive officer.

Armed with the sharp teeth of state and federal laws, Briggs has stood up to the Central Coast’s most powerful interests, including oil companies, Pacific Gas and Electric Co., and agriculture.

It was Briggs who signed an order in the ’90s requiring oil giant Unocal to pay an $18 million settlement and carry out a vast cleanup and remediation project to remove oil pollution under Avila Beach.

Briggs also signed an order requiring Unocal to pay a $43 million settlement and clean up an Exxon Valdez-size underground oil leak at the Guadalupe Dunes. That was after he served a search warrant at the Unocal field office, to examine company files for evidence of the pollution.

He also took on PG&E for allegedly damaging the coastal environment at the Diablo Canyon nuclear power plant, and for withholding data about the detrimental effects of the plant’s cooling-water intake. While never admitting wrongdoing, the utility paid a $14 million settlement.

A staffer at the California Men’s Colony wastewater treatment plant was sentenced to a term in prison, after Briggs and his staff discovered monitoring results had been falsified.

Under his leadership, funds paid by polluters have been set aside to protect and restore thousands of acres of habitat, including Johnson Ranch near San Luis Obispo, Cherry Canyon near Avila Beach, Paradise Beach near Point Sal, and Elkhorn Slough in Monterey County. Settlement funds also kickstarted a comprehensive, regionwide water quality monitoring program that helps spotlight pollution problems in surface and groundwater.

“We are one of the very few entities that are really the guardians of the environment,” he told members of the water board at their July meeting in Watsonville. A long resolution was read out, commending Briggs as an “extraordinary person” with an “extraordinary career,” and praising his courage and dedication.

Board member Bruce Delgado, the mayor of Marina, choked up during his accolades for Briggs, saying, “He’s impressed me with his grounded presence. I’m already thinking in other circumstances, ‘What would Roger do? How would Roger handle this?’”

In an interview during his last week at the San Luis Obispo headquarters of the water board, with cardboard cartons on his office floor and a packing tape dispenser on his desk, Briggs said, “It’s unusual these days for people to stick with a job. But the work is kind of a calling for me. I have passion for what we do as far as environmental protection, helping the creeks and watersheds.”

As an engineering student at UC Berkeley in the early ’70s, during “the awakening of the environmental movement,” he saw an opportunity to contribute to society by focusing on what later came to be called environmental engineering. His first day at work as an engineer at the Central Coast Regional Water Quality Control Board was in 1975, when he worked on some of the first waste discharge permits for Diablo Canyon.

In those days, the emphasis was on pollutants coming out of pipes. As Briggs worked his way up the ranks, the agency’s focus widened to include all sorts of threats to the region’s water resources. His latest effort aims at updating the region’s Basin Plan, which spells out enforcement and protection methods for the many uses of water; he’s been pushing for a water board role in land-use decisions as a way to create healthy watersheds and groundwater basins.

The Central Coast board is charged with protecting water resources in a cumbersome territory that extends for 300 miles, covering all or part of nine counties from Santa Cruz to Ventura. Board members, appointed by the governor and confirmed by the state Senate, come from all over the region and a variety of backgrounds; board meetings are held in various locations to encourage public participation.

And participate they do: Water board meetings on contentious issues can stretch for hours, even days, of public testimony.

“It takes a lot of patience,” Briggs told New Times. “People have a narrow perspective. But we learn, too; we don’t have all the answers. New information often comes out that changes the board’s perspective. Even though it’s sometimes repetitious, there are also those pearls of wisdom.”

The public and “dischargers” are on equal footing, with an opportunity to address the board, he said. “We try to make it accessible and friendly. The chair [Jeffrey Young of Santa Barbara, cofounder of Heal the Ocean] bends over backwards to let people have their say.”

In a phone interview from his Santa Barbara law office, Young noted that Briggs is thoughtful, level-headed, and a good listener.

“He understands the technical side and the social side of issues, and he’s always offered sound advice,” Young said.

When Briggs became the leader of the pack at the water watchdog agency, the staff saw “a tectonic shift,” according to assistant executive officer Michael Thomas—from being “very, very careful about what we did” to taking on the most important water quality issues in the region, with a focus on tangible results.

Briggs points to the presence of steelhead in San Luis Obispo Creek as another success, after SLO was required to clean up its wastewater treatment. As for the Los Osos sewer project, he said, “With all the delays, it’s unfortunately going to be very expensive. I feel for the people out there—they’re going to have high bills.”

A large framed photo on his office wall gives a clue about his retirement plans: an aerial shot of him and his wife on their sailboat off the coast of Mexico, taken during a six-month sabbatical in 2006.

“I sail, I play racquetball, I play music, ride a bike, ride horses—and I never have enough time while I’m working!” he said.

He plans to race in the Zongo Cup later this month, sailing from Morro Bay to Port San Luis—right past Diablo Canyon.

As Briggs faced his last days doing a job he’s loved for nearly 40 years, he said, “We take enforcement action on big industry or mom-and-pop businesses. Just because someone is big and has lots of attorneys—we’ve gone to court many times—what we have to do is what’s right for the environment.”