A group of small-winery owners in rural west Paso Robles who say they're feeling crushed by their industrial-sized neighbor are a reflection of a larger-scale debate underway in SLO County: Just what uses are appropriate on local agricultural land? 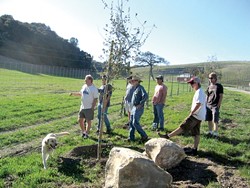 # A proposal for more than 90,000 square feet of winery production and hospitality facilities for Heart Hill Vineyard Winery on Hwy. 46 West and Anderson Road is also raising questions about local property tax relief under the Williamson Act, a statewide program designed to keep agricultural land from being converted to urban land uses.

The SLO County Planning Commission received a letter from the California Department of Conservation at its meeting on March 8, at which the Heart Hill proposal was discussed. The letter states that several planned uses including a lounge, commercial kitchen, and storage space don't appear to be compatible uses on agricultural land under Williamson Act contract.

Processing, tasting, and sales of processed wine generally would be considered compatible, the Department of Conservation wrote.

During public testimony at the meeting, Sue Luft of North County Watch said, "Please do not risk the Williamson Act, which is so important to many folks in active agriculture, by allowing uses which are clearly in violation of the Act."

An Anderson Road small-winery owner, Eric Jensen, told planning commissioners, "This could jeopardize real farmers. If I lose my Williamson Act [property tax exemption], I go out of business, along with 700 others in this county."

The planning commission delayed making a final decision on the proposed development, suggesting instead that the local Agricultural Preserve Review Committee should review the project to see if it's consistent with the Williamson Act.

More than half of the privately owned rural land in SLO County is under long-term Williamson Act contracts, meaning landowners have voluntarily agreed to use their property for agriculture for 10 or 20 years in return for much lower property taxes. The average annual tax relief per property is $6,816, county officials say.

These rules are being updated to reflect the provisions of a new state law known as the Laird Bill, designed to help curtail improper use of contracted agriculture land. Lodging and special events on agricultural land are two issues due to be addressed as the county land use ordinance is updated, Hoag said in an interview.

"The handwriting is on the wall. There will be a very hard look at [bed and breakfast] lodging on ag land, especially Williamson Act land," Hoag said.

A Heart Hill spokesman defended the hospitality center and production facility proposed for the winery property, which he described as "mid-sized." The Department of Conservation letter questioning the development's compatibility with the Williamson Act is "very subjective" and based on incorrect information, said Brian Storrs, president of Niner Wine Estates, which is proposing the Heart Hill project. Dick and Pam Niner, who also own Dioptics eyewear company in San Luis Obispo, "will prove to be the best neighbors out there we can, once we get our building permit," he added.

The company's 70,000-square-foot wine processing and bottling facility proposed for Anderson Road will be based on a "green" design, the first in the county with 100 percent of winemaking indoors, Storrs said.

"The county has supported our needs we want on our Williamson Act property," he said in an interview.

But the Anderson Road small-winery neighbors Midnight Cellars, Dark Star, Booker, and Grey Wolf are still worried about the scale of the project and its potential impact on their rural tasting rooms and vineyards, including possible problems with wastewater odors from a pond proposed close to Midnight Cellars' tasting room, truck traffic on the narrow road, and the water supply.

"It's a conversion of ag land to Disneyland," winery owner Jensen recently told a visitor.